Adolf Hitler's “Mein Kampf” is expected to be reissued in Germany for the first time since the end of World War II. Although widely available elsewhere, the book — Hitler's testament and what's considered the founding text of Nazism — was never reprinted in postwar Germany.

Its planned reissue in Germany will come in the form of an academic tome that supplements Hitler's text with commentary and criticism. The new version offers “a useful way of communicating historical education and enlightenment,” says one of the scholars behind the project. “A publication with the appropriate comments, exactly to prevent these traumatic events from ever happening again.”

There was a time, though, when “Mein Kampf” was not just the repugnant treatise of the 20th century's greatest villain. More than seven decades ago, Hitler and the message of Nazism had great traction and it required clear-eyed thinkers to cut through its seductions.

George Orwell's 1940 review of an English edition of the book is as important now as it would have been then. The celebrated British man of letters has a special lens into the dangers and allure of fascism.

What (Hitler) envisages, a hundred years hence, is a continuous state of 250 million Germans with plenty of “living room” (i.e. stretching to Afghanistan or thereabouts), a horrible brainless empire in which, essentially, nothing ever happens except the training of young men for war and the endless breeding of fresh cannon-fodder. How was it that he was able to put this monstrous vision across? 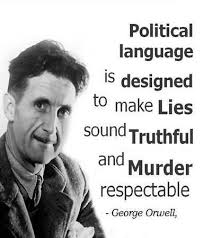 It's not sufficient to answer that last question just by looking at the political and economic forces that buoyed Hitler's rise, Orwell contends. Rather, one has to grapple with the inescapable fact that “there is something deeply appealing about him.”

The Atlantic's Graeme Wood quoted this same piece in his lengthy meditation on the worldview of the militants of ISIS. The militarist pageantry of fascism, and the sense of purpose it gives its adherents, echoes in the messianic call of jihadists.

The most poignant section of Orwell's article dwells on Hitler's dictatorial style. Orwell gazes at the portrait of Hitler published in the edition he's reviewing:

It is a pathetic, dog-like face, the face of a man suffering under intolerable wrongs. In a rather more manly way it reproduces the expression of innumerable pictures of Christ crucified, and there is little doubt that that is how Hitler sees himself. ... He is the martyr, the victim, Prometheus chained to the rock, the self-sacrificing hero who fights single-handed against impossible odds. If he were killing a mouse he would know how to make it seem like a dragon.

Hitler projected this image and went on to unleash horrors on the world. But the narcissism of a “martyr” and the penchant to make dragons out of mice, as Orwell puts it, can be found in demagogues of all political stripes. It's worth keeping these words in mind when watching the spectacle of our contemporary politics.

Ishaan Tharoor writes about foreign affairs for The Washington Post. He previously was a senior editor at TIME, based first in Hong Kong and later in New York.

See the movie The Act of Killing, City of Lost Children, and The Brotherhood of the Wolf.