The battle for wartime profits is waged in the boardroom. Inside the most lucrative–and the ugliest–deal of the Iraq and Afghan wars. 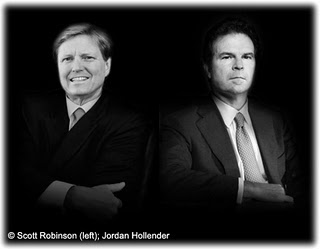 For 19 years Robert McKeon and Thomas Campbell were inseparable. They raised money and struck deals together, buying and selling dozens of companies, often in the defense sector–smallish outfits such as Athena Innovative Solutions, Integrated Defense Technologies and Vertex Aerospace. Working 12-hour days out of next-door offices in midtown Manhattan, they could hear each other’s phone conversations and knew the most personal details about each other. They golfed together, went skeet and trap shooting, traveled together for meetings and once shared a hotel room in Mexico. On Fridays they would dine, just the two of them, at Harry Cipriani, the ritzy Manhattan restaurant. “I believe we were pretty close to best friends,” says Campbell.

They also hatched the most lucrative deal of the wars in Iraq and Afghanistan. Their 2005 purchase of DynCorp International, the Falls Church, Va. provider of services to the U.S. military, landed McKeon and Campbell at the center of a booming and controversial business. The leveraged buyout also helped rip apart their relationship. McKeon ended up very rich, personally earning $350 million, or seven times his investment, and in control of a company that has emerged as the biggest winner in the war game. Campbell, forced out of DynCorp, came away with very little and has started over. Today the two former friends are locked in mortal combat–trading accusations of greed and betrayal in protracted litigation and competing for $25 billion a year in battleground services contracts for the U.S. government.

Battlefield contractors have been around for years. But their importance has grown in post-Cold War defense spending. Roughly 240,000 contractor employees, many of them foreign nationals, support U.S. missions in Iraq and Afghanistan, outnumbering the troops they serve. They provide security, military and police training, logistics and air support, reconstruction and every mundane service it takes to feed, clothe and clean fighting forces–collecting some $100 billion of the $830 billion U.S. taxpayers are on the hook for in the two wars. Though they don’t operate under the same rules of engagement as the U.S. military, contractors risk their lives; 1,360 of them have been killed and 20,000 injured in the two war zones.

Contractors have drawn fire because of high-profile scandals. KBR, split off from Halliburton, has prepared 937 million meals, issued 7 billion gallons of fuel and driven 745 million miles moving soldiers and supplies but has been dogged by accusations of negligence and overbilling. Titan Corp., now part of L-3 Communications, and CACI International were caught up in prisoner abuses at Abu Ghraib (neither company has been prosecuted). Blackwater USA, a private security firm renamed Xe Services, had been protecting U.S. diplomats in Iraq but got kicked out of the country after its employees killed civilians in Baghdad’s Nisur Square in September 2007.

Yet the business keeps growing–for giants like KBR (annual sales: $11.6 billion) and SAIC ($10.1 billion), which manages the delivery of mine-resistant vehicles, and for smaller private firms like Triple Canopy, which does security work, and IAP Worldwide Services, helping to generate power at forward operating bases. Defense Secretary Robert Gates is trying to curtail outsourced jobs, suggesting in April that they be reduced from 39% of the Pentagon’s workforce to 26%, largely by hiring civil servants to handle the acquisitions process. But Gates and his war planners have shown little inclination to get people in uniform to turn wrenches, peel potatoes, build bases, drive trucks or protect diplomats. “There is no intent not to have contractors in the battlefield–I am not uncomfortable with a 1:1 ratio,” says Jacques Gansler, former Under Secretary of Defense in the Clinton Administration and chairman of a 2007 commission that urgently called for contracting reform. “Issues need to be resolved,” he says, “but you can’t get along without them.”

President Obama sent 20,000 additional troops this summer to Afghanistan to go after the Taliban. DynCorp will be at the forefront of that action, training Afghan police, building barracks, managing poppy eradication and providing U.S. troops with laundry, fuel and meals in the war’s biggest new contract. That’s on top of big deals in Iraq, airlifting and protecting diplomats and supplying combat interpreters.

Previous Article
Blackwater Accused of Killing Whistle-Blowers
Next Article
Is Phyllis Schlafly the Most Dangerous Woman in America?

Is Phyllis Schlafly the Most Dangerous Woman in America?
Aug 10