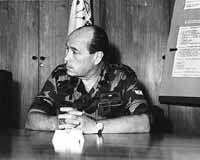 Cabanillas received his sentence after being found guilty of five counts of murder, 29 counts of "illegal detentions" and 29 counts of torture, a ruling read. The court also sentenced former military intelligence agent Raul Guglielminetti to 20 years in prison, while ex-intelligence officers Honorio Martinez Ruiz and Eduardo Ruffo got 25 years each behind bars.

The sentences were welcomed by relatives of the victims.

"Justice has been done. But we are still looking for the baby of my militant friend and colleague Alicia Chuburu, kidnapped when she was seven months pregnant," said Maria del Carmen Costa, tears streaming down her face. Uruguayan human rights activist Sara Mendez hailed the "compensation" provided by the sentences. "This ruling is the product of 30 years of struggle to sentence the culprits," she told AFP.

Mendez was one of over 100 people believed to have been kidnapped and taken to the secret prison, Automotores Orletti. Most detainees were Uruguayan opposition activists, but there were also Chileans, Bolivians, Peruvians and two officials from the Cuban embassy. Many of Mendez's compatriots simply vanished, their fate unknown to this day.

But relatives of the accused, who watched the trial from a mezzanine, rose from their seats when they ruling was read and began singing the national anthem.

"A verdict and a punishment for the terrorists!" yelled Cecilia Pando, wife of a military officer who heads a group that defends the actions of the former dictatorship. Outside the courtroom, dozens of militants sang slogans like "they will suffer the same fate as the Nazis. Wherever they go, we will go look for them," while waving the Uruguayan, Peruvian, Chilean, Bolivian and Cuban flags. The counties all lost some of their citizens at Orletti.

The site, which the military ironically dubbed "the garden," was used June-November 1976 for Operation Condor, a plot by right-wing South American dictatorships in the 1970s to coordinate repression of leftists in Argentina, Chile, Paraguay, Brazil, Bolivia and Uruguay.

In 2008, it was made into a museum dedicated to the memory of the disappeared and those tortured there. Some 30,000 people were killed or disappeared under the Argentine dictatorship, according to human rights groups.

Argentina abolished amnesty laws for crimes committed under the regime after Nestor Kirchner (2003-2007) came to power as president.