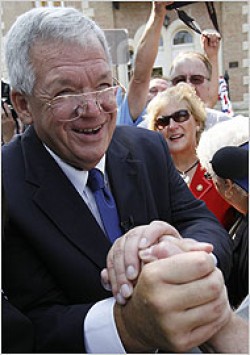 Former House Speaker J. Dennis Hastert officially announced today that he would not seek re-election to Congress, saying he still hoped to be an advocate for his home state of Illinois.

Mr. Hastert, who became speaker at the height of the Clinton impeachment era, had served in the post until the Republicans lost their majority in Congress last year. The former wrestling coach and teacher ruled over the House as George W. Bush became president in the wake of the 2000 election mess and through the 2006 midterms, all the while in charge of the membership.

"Sibel Edmonds and Daniel Ellsberg say it's worth looking into: The major effect of that is that terrorist gangs are taking a cut of this, including Al Qaeda, which essentially taxes this traffic as it goes through the various lands where each 'band' pays a percentage as they hand it off. In other words, the US is in effect, endorsing - well, 'endorsing' is too strong a word - 'permitting', definitely permitting, or 'not acting against,' a heroin trade - which not only corrupts our cities and our city politics, AND our congress, as Sibel makes very specific - but is financing the terrorist organization that constitutes a genuine threat to us. And this seems to be a fact that is accepted by our top leaders, according to Sibel, for various geopolitical reasons, and for corrupt reasons as well. Sometimes things are simpler than they might appear - and they involve envelopes of cash. Sibel says that suitcases of cash have been delivered to the Speaker of the House, Dennis Hastert, at his home, near Chicago, from Turkish sources, knowing that a lot of that is drug money."

Summary: In reports about former House Speaker Dennis Hastert's announcement that he will not seek re-election in 2008, The Wall Street Journal did not mention the controversy over Hastert's handling of the House page scandal, in contrast with The Washington Post and The New York Times, which did note that Hastert was involved, but glossed over pertinent details. ...