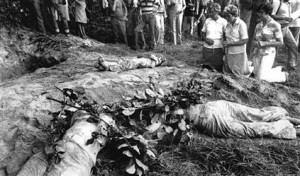 On June 28, 2009, while he slept, dozens of Honduran soldiers stormed President Manuel Zelaya's residence, arrested him at gunpoint, and exiled him to Costa Rica, in violation of the 1982 Constitution, stating:

"No Honduran may be expatriated nor delivered by the authorities to a foreign state," nor may a democratically elected leader be deposed, evidence showing Washington's involvement and support, coordination handled by US Ambassador Hugo Llorens and Thomas Shannon, Jr., current US Ambassador to Brazil, then Assistant Secretary of State for Western Hemisphere Affairs.

Under him and Sosa, Hondurans have endured death squad terror at the hands of the military whose officers from captain on up have been trained for decades at the infamous School of the Americas (SOA), renamed the Western Hemisphere Institute for Security Cooperation (WHISEC), where they're taught the latest ways to kill, main, torture, oppress, exterminate poor and indigenous people, overthrow democratically elected governments, assassinate targeted leaders, suppress popular resistance, and work cooperatively with Washington to solidify fascist rule, intolerant of democratic freedoms or leaders not backing ruling class interests, using deep repression to enforce them.

Brutally repressive tactics have been used, including arbitrary arrests, kidnappings, suspension of civil liberties, martial law, indefinite detentions, beatings, torture, sodomizing men, gang-raping women, suppression of dissent, and death squad murders, at least 14 documented since Lobo took office, including nine journalists, placing all independent reporters at risk,  international human rights groups calling Honduras the most dangerous country in the world for them, authorities prosecuting no one for the crimes.

"....the Honduran regime speaks so derisively and cynically about grave human rights violations - including assassinations, illegal detentions, torture....(It) demonstrates the degree of impunity with which this regime operates."

The rule of law doesn't exist, Washington a party to the worst human rights abuses and injustice, including repression, detentions, torture, land theft, and killings to keep ruling oligarchs in power, and popular resistance suppressed, but it persists. Established after the coup, the National Front of Popular Resistance (FNRP) is a broad grassroots coalition of campesinos, human rights supporters, unionists, women, students, teachers, and others supporting democratic freedoms in Honduras, saying on its web site:

"One who remains silent in the face of injustice becomes its accomplice....A year old now, the Resistance has grown into a widespread political body (transitioning from short-term action to a) strategy to take power and change the country."

Last summer at "Station number 4," dozens of Hondurans were detained, including 10 or more students, one of them telling AI:

About 200 of them were marching peacefully. "The police were throwing stones, they rounded us up, they threw us face down on the ground and they beat us - there are people with fractures, with head wounds, they beat us on the buttocks. They stole our cameras, they beat us if we raised our heads, they beat us when they were getting us into police cars."

Others reported similar stories, evidence showing they were badly bruised, swollen, and cut. Two days after an El Duranzno demonstration, Roger Abraham Vallejo, a 38-year old teacher, died from a bullet wound to his head. A witness told AI:

"A patrol car was advancing toward the crowd, and as it turned round at speed....police....started to shoot...." Women were treated harshly like men, some sexually abused, police systematically using disproportionate force, in violation of international law standards to which Honduras is party, including the UN International Covenant on Civil and Political Rights (ICCPR), affirming the "right to peaceful assembly," and prohibiting torture and cruel, inhuman or degrading treatment or punishment.

In addition, Article 2 of the UN Code of Conduct for Law Enforcement Officials states:

"In the performance of their duty, law enforcement officials shall respect and protect human dignity and maintain and uphold the human rights of all persons."

Article 3 says "Law enforcement officials may use force only when strictly necessary and to the extent required for the performance of their duty," meaning only under extreme circumstances, never against peaceful protestors or persons posing no threat. Arbitrary arrests, detentions, beatings, torture, and other abuses are strictly prohibited.

Free expression, assembly and association are enshrined in human rights law. Yet Robert Barra, a Chilean independent photo-journalist told AI that police beat him and confiscated his camera while he was covering a peaceful protest. He was severely bruised and cut. Others were treated the same way, and media outlets like Radio Globo, Canal 36, Maya TV and Radio Progreso were taken off the air and shut down. Anyone suspected of threatening state authority faces recriminations, even death.

"The (Lobo) regime (has) implemented a policy of state repression (terror) - including the activation of paramilitary death squad groups, to threaten, intimidate, terrorize and kill members of the pro-democracy, anti-coup movement," and potentially anyone challenging state authority, Oscar Geovanny Ramirez, a 16-year old campesino, one of many.

During a violent June 20 joint police/military operation against the Aurora Cooperative of the Movimiento Unificado Campesino del Agua (MUCA), he was murdered. Five others were arrested.

Witnesses said police and the military arrived in two patrol cars, (one identified as the National Preventive Police), and opened fire at close range. Those arrested were charged with illegal weapons possession and conspiracy.

The human rights organization advocating for the right to food, FIAN International, condemned the violence saying:

"We face the never ending story. The murders, persecution and various physical and psychological aggressions continue. When (MUCA) signed (its) agreement with (Lobo), understood was that the aggression by the police and armed individuals would end, but the actual facts disprove the belief."

"We are living in a state of terror. There is no security in the country....We are in a terrible economic, moral and political crisis....We don't have a democratic process. We have a military process....We have a very powerful oligarchy that is ruling the country with the army" and police - the poor, disadvantaged, and anyone challenging them subject to arbitrary arrest, detention or death.

It's reminiscent of Battalion 316, the CIA-created death squads that disappeared, tortured, and exterminated regime opponents in the 1980s. Reportedly, Billy Joya, a retired police captain, founder of Cobra (an elite Preventive Police hit squad), and one of 316's notorious members under the pseudonym "Mrs. Arrazola," returned from Spain to train soldiers how to terrorize and kill civilian freedom fighters - anyone for social justice and democracy, notions Honduras and Washington won't tolerate.

Since the June 2009 coup, the Committee for the Families of the Detained and Disappeared of Honduras (COFADEH) documented 47 assassinations, 14 since Lobo's January 28 inauguration. The Inter-American Commission on Human Rights and Center for Justice and International Law voiced great alarm about ongoing state terror and lawlessness, authorities, of course, doing nothing to address or even recognize a problem.

On May 4, Lobo announced a "Truth Commission," what Rights Action called a "mockery of human rights & rule of law," COFADEH Director Berth Oliva wanting an independent one in her same day article titled, "A Real Truth Commission for Honduras," saying her "beloved and troubled country....desperately needs" it.

Lobo's Commission is a sham, human rights groups like Rights Action and COFADEH calling it a scheme to suppress truths and whitewash murder, mass detentions, torture, and other abuses. Under Lobo's repressive regime, it has no legitimacy, authorities not even acknowledging post-coup terror, ongoing and unabated.

In addition, the Commission was secretly formed with no public input, its members hand-picked to absolve state crimes so security forces can freely terrorize popular resistance with impunity.

The Platform of Human Rights Organizations of Honduras has an alternative proposal - an independent commission addressing ongoing human rights violations, using testimonies of victims - a Honduran Goldstone Commission, fully empowered to report the truth and recommend those responsible be held accountable for their crimes. However, given a repressive Washington/Honduran cabal against truth, human rights, and judicial fairness, sustained activism, and struggle is essential to achieve it.

Hondurans have endured decades of repression, injustice, and poverty, the latter affecting almost 60% of the population. For over 36%, it's extreme. In addition, the Honduran Institute of Statistics reports unemployment in Honduras at 51%, mainly affecting young workers.

Washington also restored over $30 million in aid, and at Secretary of State Clinton's urging, the Organization of American States may readmit Honduras, no matter its illegitimate government and draconian austerity against its poor and disadvantaged, measures the IMF and World Bank demand, ones European officials announced at the June G20 session, what economist Michael Hudson calls the "road to financial serfdom," the same one Obama's chosen to transform America into Honduras, complete with police state harshness.

Stephen Lendman lives in Chicago and can be reached at lendmanstephen@sbcglobal.net. Also visit his blog site at sjlendman.blogspot.com and listen to cutting-edge discussions with distinguished guests on the Progressive Radio News Hour on the Progressive Radio Network Thursdays at 10AM US Central time and Saturdays and Sundays at noon. All programs are archived for easy listening.