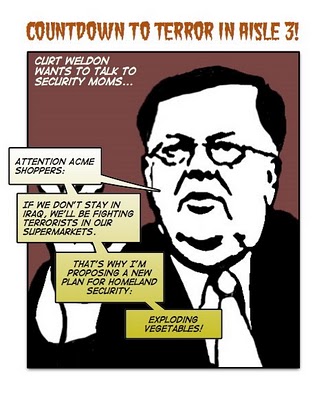 ” … He repeatedly tried to persuade the State Department to grant visas to relatives of a Serbian tycoon with close ties to Slobodan Milosevic, the former Serbian president. … “

Under investigation by the Justice Department, former U.S. Rep. Curt Weldon has transferred all of his campaign money to a fund he established for his legal defense.

Weldon, a Republican who represented Delaware County for 10 terms, transferred roughly $80,000 over several months from the Weldon Victory Committee to the Weldon Legal Expense Trust, according to federal election records. Weldon closed the campaign fund May 22. Federal Election Commission rules allow campaign funds to be used for legal defense work if it is related to a person’s activities as a candidate or officeholder.

The FBI’s investigation of Weldon, which broke publicly two weeks before the congressman’s failed 2006 reelection bid, has focused in part on deals involving Russian and Serbian firms that Weldon’s lobbyist daughter represented. The probe is examining whether Weldon exerted any illegal influence to help those companies do business in the United States.

While he was a congressman, Weldon and his daughter, Karen, traveled to Russia and met with executives of the company whose Florida offices the FBI raided, Itera International Energy. Itera paid Karen Weldon’s firm $500,000 for lobbying in the United States, records show.

The agents also raided the home of Delaware County Republican powerhouse Charles Sexton, who was a partner in the consulting firm.

In December, Weldon’s former chief of staff pleaded guilty to failing to report $19,000 that was paid to his wife through another Russian company. The former staffer, Russell James Caso Jr., agreed to cooperate with federal investigators, and the Justice Department said it would not prosecute Caso’s wife.

The Russian company for which Caso’s wife worked is the International Exchange Group, sources said yesterday. The company was identified for the first time in an article in the Wall Street Journal yesterday.

As a congressman, Weldon had sought a federal grant for the group, the Journal reported. During a 2004 congressional hearing, Weldon said that the International Exchange Group was organized by Russians who “report directly to [former President Vladimir] Putin.”

In his post with the House Armed Services Committee, Weldon – a former Marcus Hook fire chief who speaks Russian – often traveled to Russia and other former Eastern Bloc nations. In addition to championing Itera and the International Exchange in Congress, Weldon also backed questionable figures in Serbia.

He repeatedly tried to persuade the State Department to grant visas to relatives of a Serbian tycoon with close ties to Slobodan Milosevic, the former Serbian president.

Previous Article
The Original Indiana Jones: Otto Rahn and the Temple of Doom
Next Article
The Path to 9/11: PART 17 – Raytheon, E-Systems & the Return of Washington Group International

The Path to 9/11: PART 17 – Raytheon, E-Systems & the Return of Washington Group International
Jun 13