Unless there's been a Newsom/Getty/bin Laden/Bush plot of some kind, how could voters support Care Not Cash? 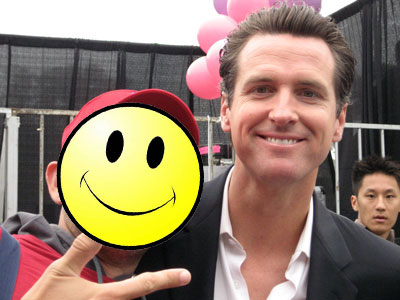 Gavin Newsom, whose father was a business partner of Otto von Bolschwing, the Nazi emigre who settled in the Silicon Valley after the war with legal and lobbying assistance from Richard Nixon.

By his own admission, David Hagberg is an "original computer nerd" who spends much of his time at home; it was never his ambition to become a CIA mastermind who would orchestrate international intelligence operations, befriend fugitive terrorists, or predict the 9/11 attacks.

Though Hagberg asked for none of these roles, he can't seem to shake people wishing to bestow them. He's a thriller author who in August 2000 released Joshua's Hammer, in which Osama bin Laden bungles an attempt to blow up the Golden Gate Bridge. Now, Hagberg's pursued by a type of reader who believes his books are road maps to a real-life international conspiracy.

I first spoke with Hagberg about a year ago, days after the attacks of Sept. 11 had created an eerie facsimile of the plots of Joshua's Hammer ....

"There's one woman who claims to be a Shakespeare scholar," Hagberg says of a reader he's seen numerous times at book shows and writers' events. "She'll always ask one or two confrontational questions -- things like, 'Do you know bin Laden personally?'

"There's another named Jim, a mild-mannered guy in his early 60s. He'll be standing nearby for a long time, staring out the side of his eye. He's got this 'I know where you're coming from' look. Whatever book I come out with, he tells me that he's working on something that proves it's true."

And then there "Is CIA speaker & author David Hagberg The Prophet?" Adamson's Web site asks.

"I was on a Denver radio talk show," Hagberg recalls. "And after we were done, the talk show host asked me, 'Are you worried about the Arabs coming over and doing a hit on you and wiping you out?'

"What do these folks hope to gain from asking me these things? Maybe they want me to say, 'It's OK buddy; I'm working on it. Everything's going to be OK.'"
•••••••
I can certainly understand what it's like to be pursued by conspiracy theories; take, for instance, the one that's been coursing around my brain. I began to believe something suspicious -- nefariously, ominously, globally suspicious -- was going on in San Franicso.

Newsom has spent the past year or so positioning himself as the "homelessness" candidate in advance of next year's mayoral elections. He's showered the government with homelessness-oriented measures, most prominently his "Care Not Cash" ballot initiative that reduces welfare checks while offering vague language about replacing that aid with social services such as housing.

None of this is unusual. San Francisco mayors traditionally position themselves as homelessness candidates sooner or later, before easing away from the issue as their administrations wear on. Despite the touchy-feely rhetoric that generally accompanies the h-word, the rich loathe beggars the world over, whether in Calcutta, Mexico City, or San Francisco. So a ballot initiative claiming to solve homelessness by taking money from the poor would seem who represents the city's wealthy northwestern section and owes much of his stature in life to the Getty oil fortune.

But the part of the Care Not Cash campaign that perplexes me -- the part that positively smacks of global conspiracy -- is the apparent popularity of Newsom's proposal. Polls say it's favored overwhelmingly, even though it's based on speciousness, demagoguery, and political ambition both facile and bold. In a city such as ours, which has been fighting-proud of its concern for the poor, support for something this mean couldn't possibly be organic to San Francisco. It can only be the work of darker forces.
•••••••
I first suspected an international conspiracy might be afoot when I began noticing an odd shiftiness among Newsom's Marina District Care Not Cash supporters.

Proposition N will replace most of the monthly welfare check paid to homeless people.

Though the sloganeering accompanying Newsom's measure suggests that homeless people now receiving cash payments will instead get food and shelter, the measure's odd lack of specificity on how the homeless would actually obtain those services suggests a more complicated scenario.

Newsom's measure states that, instead of their current monthly cash stipends, homeless people would instead be eligible for food and housing benefits worth an equivalent amount of money. If the benefits weren't available, a homeless person could then apply for an emergency check.

It's well documented that the city doesn't have near enough housing for the 9,500 residents the San Francisco grand jury this spring said don't have permanent homes. So the Newsom measure's language seems like nonsense, unless one imagines the following gritty scenario: A broke streends the night outside. The next morning he walks to a city Social Services office to request an emergency check, before heading into the streets in search once again of "evidence" of a fact already beyond doubt: The city doesn't house its poor. Current law requires city welfare applicants to apply for 20 jobs a month, so they'd presumably need to conduct their daily housing audits in their spare time. Clearly, this "Care" initiative stands to condemn San Francisco down-and-outers to a living version of hell.

When not misleading voters about their measure's effects, Newsom's caring troops have directed their disingenuousness resources toward a competing ballot measure sponsored by Board President Tom Ammiano. The measure identifies funding sources such as n of financing sources, Newsom's troops speciously claim Ammiano's measure is unfunded.

Unlike Newsom's, Ammiano's proposal lists specific requirements for increasing the types of drug treatment and housing facilities known to help people get back on their feet. Yet Newsom's supporters claim their measure would be better at curing addicts, though it offers no guarantees of bolstered drugs programs.

They say Ammiano's measure is politically motivated, somehow overlooking the fact that the board president's record of defending the downtrodden hardly needs burnishing. ...
•••••••
San Franciscans aren't ordinarily chumps. And they aren't typically mean. Yet a July poll showed Newsom's measure with 74 percent support. Clearly, forces from beyond the San Francisco Bay are at work. That's where the international conspiracy comes in.

- In 1984, following one of the most contentious corporate takeover battles
in history, San Francisco oil scion Gordon Getty, who held sway over the majority of shares in Getty Oil, reneged on an agreement to sell the company.

- At about the same time, or perhaps just before he was orchestrating the sale to Texaco, Gordon Getty penned an opera inspired by Shakespeare's Falstaff, performed by the San Francisco Symphony in 1985. Getty named the opera Plump Jack.

- The year after Plump Jack premiered, Arbusto emerged as another Bush-related firm, Harken Energy Corp., and when Harken ran into trouble in 1987, Saudi Sheik Abdullah Taha Bakhsh bought a 17.6 percent stake in the company. Bakhsh's banker in Saudi Arabia just happened to be Khalid bin Mahfouz, who has widely been reported to have given millions to terrorist front organizations.

- That same year, Bush's Harken Energy acquired Aloha Petroleum, a chain of 40 gas stations in Hawaii, from -- who else? -- Getty Oil. Texaco, plump with its Getty Oil acquisition, would later join with the bin Laden-linked Mahfouz family, through Nimir Petroleum, to develop oil fields in Kansas.

- In 1989 a group of Harken executives created a Harken-financed shell company to buy Aloha Petroleum, founded when Gordon Getty's father, J. Paul Getty, installed Hawaii's first gas pumps. This fraudulent transaction, described by analysts as identical to Enron's off-balance-sheet scams, allowed Harken to obscure $7.9 million in losses, providing time for George W. Bush to sell his own Harken shares, then use the ill-gotten money to become a political and financial player in Texas.

- In 1992 Gordon Getty backed his 25-year-old son Billy, along with Billy's older boyhood friend/chaperone Gavin Newsom, to open a wine store in Cow Hollow. Getty and Newsom named the store "PlumpJack." The Gettys, with Newsom as their front, then opened two upscale restaurants; a Napa Valley winery; a resort, restaurant, and wine store at Lake Tahoe; and a South of Market loft pro

- In 1997 Ann and Gordon Getty used $2.3 million in Getty Oil/bin Laden/Aloha/ Texaco money to buy the Clinton Reilly Building at 704 Sansome St. for use as a base of operations for Gavin Newsom. The building was considered a "class B" office building, according to a story in the San Francisco Business Times. But at $230 per square foot, the Gettys paid Reilly a higher price than even the ritziest of downtown "class A" office towers. Reilly, a powerful political consultant and former Svengali to Mayor Frank Jordan, went on to orchestrate a wave of political upsets in the 2000 Board of Supervisors elections. It remains unclear whether Reilly continues to owe the Gettys political favors as a result of the 1997 deal.

- In 2002 Newsom emerges as an early front-runner in the 2003 San Francisco mayor's race. That year pricey billboard

- Mysteriously, S.F. voters seem fond of the measure. Odder still, they seem poised to boost Newsom/Getty/bin Laden/Bush into the office of mayor of San Francisco.