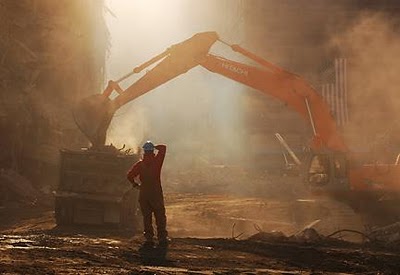 More than 360 workers who dealt with the aftermath of the World Trade Center disaster have died, state health officials said Wednesday.

Officials have determined the cause of death of 154 of the responders and volunteers who toiled at Ground Zero, the blocks nearby and at the Fresh Kills landfill, where debris from the site was taken.

"It's the tip of the iceberg," said David Worby, who is representing 10,000 workers - 600 with cancer - who say they got sick after working on rescue and recovery efforts.

"These statistics bear out how toxic that site was," Worby said.
Most of the deadly tumors were in the lungs and digestive system, according to the tally from the state's World Trade Center Responder Fatality Investigation Program.

Other deaths were traced to blood cancers and heart and circulatory diseases. Five ex-workers committed suicide, said Kitty Gelberg, who is tracking the deaths for the program.

Gelberg said she had not yet determined whether the number of cancer deaths was more or less than those typically occurring in men in their 20s to 50s who work as cops, firefighters or laborers - the majority of 9/11 workers.

"We are not saying all of these deaths are World Trade Center-related," Gelberg said. "Without the statistics, we are not making judgment."

She added that relatives of people who died of cancer may be likely to link their loved one's death to their 9/11 work and add them to the database, despite other possible factors.

But Gelberg said she is compiling the deaths from public sources, individuals and agencies and believes there is an overall undercount of workers who have died. The statistics cover Sept. 12, 2001, through yesterday.

The city Health Department said it was "actively examining whether deaths have been elevated as a result of 9/11."

"We know people were exposed to carcinogens. There was benzene, dioxin, asbestos," said her colleague Dr. Philip Landrigan. "There's reason to be concerned, so we're engaged in watchful waiting. So far, there's no excess."

Cathy Murray, whose husband, Fire Lt. John Murray, died of colon cancer April 30, "absolutely" connects his disease to his work at Ground Zero. He was diagnosed in June and was 52 when he died, she said. An FDNY spokesman couldn't immediately say where or when Murray performed 9/11-related duty, but a department letter confirms that he spent at least 40 hours at World Trade Center-designated work sites.

"He was perfectly healthy," said Cathy Murray, 53, of Staten Island. "He never smoked a day in his life, and neither did I. It happened so quick and so aggressive.

"He was responding at first, but then he wasn't," she added. "And now he's gone."

Celia Correa, 58, has lung disease and a host of other medical problems that she believes are connected to her exposure to the World Trade Center dust after 9/11.

She and other activists are holding a forum about 9/11 health Sunday afternoon. Residents, workers and students will speak about their continuing health problems following 9/11. Doctors will talk about the 9/11-related illnesses they have seen and will tell people where they can go for treatment.

“More and more of us are developing more and more illnesses and conditions, but they’re not being linked to 9/11,” Correa said. “These medical problems take a toll on your body slowly, and finally it erupts.”

One goal of Sunday’s event is to spread the word about the W.T.C. Environmental Health Center, which offers free treatment to anyone with 9/11-related health problems. Staff from the center will register attendees for intake exams at Bellevue Hospital, Gouverneur Healthcare Services on the Lower East Side and Elmhurst Hospital in Queens.

Laine Romero-Alston, director of research and policy for the Urban Justice Center, one of the organizers, sees the event as an opportunity to spread the word about the free healthcare.

“There’s a serious health crisis related to 9/11,” Romero-Alston said. “Doctors don’t know what’s going on. What was initially all respiratory, is not all respiratory.”

She said doctors are now seeing increasing numbers of cancer cases and blood diseases in those exposed to 9/11 contaminants, along with more complaints about skin, digestive and gynecological problems.

Correa said she has experienced a progression of symptoms. She worked as an administrative assistant at 88 Pine St. from October 2001 until July 2004. She helped clean the office and worked at a desk directly beneath an air vent. The dust from 9/11 was literally part of the air she breathed, she said.

Correa developed lung disease, chronic asthma and bronchitis, respiratory problems that some doctors have linked to 9/11. But she also noticed a number of other health problems, which she didn’t initially connect to her exposure. She had acid reflux, vertigo, muscle aches, hemorrhaging and a rash that doctors couldn’t diagnose. No longer able to work, Correa was left without health insurance and had to declare bankruptcy.

Now, Correa receives all her healthcare and medication through the W.T.C. Environmental Health Center. She is also a member of Beyond Ground Zero, an activist organization that is cosponsoring Sunday’s panel.

Jeffery Hon, the city’s 9/11 health coordinator will attend the forum. Dr. Joan Reibman, a 9/11 health expert, will speak, along with representatives of several local elected officials.

The activists will also call on the federal government to provide funding for 9/11-related healthcare and research.

“They’re not doing anything about it,” Correa said. “We don’t understand why the government doesn’t want to acknowledge us.” Correa wants a guarantee of lifelong workers compensation and subsidized healthcare.

“We don’t know, ultimately, what the full health fallout is, or what it will be in five, 10 years,” Romero-Alston added. “There needs to be long-term federal response for all those affected.”