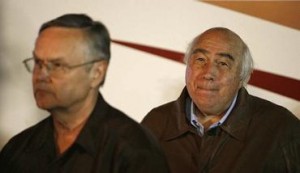 Richard Stickler, head of the Mine Safety and Health Administration (left) and Bob Murray, chief of Murray Energy, speak after a cave-in at one of Murray's mines in Utah in 2007.

Republican U.S. Senate candidate Carly Fiorina has received about $63,000 in donations this year from Appalachian coal-mining interests, much of the money from an outspoken Ohio mine owner who dismisses global warming as "hysterical global goofiness."

In a cluster of transactions, most of them dated Feb. 4, 64 donors associated with mining in Ohio, West Virginia and other coal-producing states made contributions to Fiorina, who is challenging incumbent Democrat Barbara Boxer.

Of that, nearly $25,000 came from employees and a political committee of Murray Energy Corp. of Cleveland, the nation's largest privately owned coal producer. Other donations came from Midwestern companies that sell mining equipment and supplies.

In Ohio earlier this year, Fiorina attended a fundraising event for her campaign that included coal-mining interests, a campaign aide said.

Robert Murray, Murray Energy's CEO, has clashed repeatedly with environmentalists in Ohio, facing criticism for building mining tunnels beneath an old-growth forest and pushing plans to expand a huge storage lake for water polluted with mining runoff, according to interviews and news reports.

As Congress has debated climate change legislation, Murray emerged as an aggressive critic of proposals to restrict the burning of coal, styling those efforts as a national "economic suicide note."

A spokesman for Murray declined to comment. But Andrea Saul, spokeswoman for Fiorina, responded:

"Carly thinks we need to have the courage to examine the science of climate change, but knows that us acting alone will only put our companies at a severe competitive disadvantage in the global marketplace with no impact on the issue. First and foremost, Carly believes we need to expand and diversify our nation's energy portfolio - solar, wind, coal, natural gas - to reduce our dependence on foreign sources of oil."

Murray has no known connection to Fiorina, the former Hewlett-Packard CEO. But he has publicly butted heads with Boxer, who has boosted cap-and-trade legislation to limit greenhouse gas emissions in the United States.

In testimony at a 2007 Senate hearing that Boxer attended, Murray dismissed global warming as "global goofiness" and accused congressional Democrats of "attempting to export the draconian so-called 'global warming' measures already enacted in California ... to the rest of America."

Boxer then questioned Murray about mining safety, asserting that his company had paid the "biggest fines" of any mine operator in Ohio.

"You are wrong!" Murray retorted, according to a transcript. He added: "You don't have the foggiest idea what a person does to pack a lunch and go to work or wear a hard hat."

Since then, Murray has singled out Boxer for criticism on global warming issues.

Last year, when he laid off 91 miners at a mine in eastern Ohio, Murray sought to blame President Obama and congressional Democrats, including Boxer, saying in a press release that the "insanity" of proposed cap-and-trade legislation to fight global warming was reducing the demand for coal.

In late 2008, Fiorina advocated cap-and-trade measures for environmental protection when she spoke at the Republican National Convention that nominated Arizona Sen. John McCain.

"John McCain will create a cap-and-trade system that will encourage the development of alternative energy sources," she said, the environmental news website grist.org reported. But since she began running for the Senate, Fiorina has backed away from the topic. In a TV interview during the GOP primary this year, Fiorina said, "I'm not sure," when asked whether climate change was occurring.

In a TV commercial, she mocked Boxer for asserting that climate change could pose national security issues for the nation.

"Terrorism kills, and Barbara Boxer is worried about the weather," Fiorina said.

Mine-owner Murray is "very outspoken in his opposition to climate change legislation," said Nachy Kanfer, a Sierra Club coal expert based in Columbus, Ohio. "He's so outspoken, he almost revels in it."

In a 2009 essay for the West Virginia Gazette newspaper, Murray derided cap-and-trade legislation then pending before Congress as an "economic suicide note," saying the measure would "destroy the nation's coal industry," cost taxpayers "over $2 trillion in just over eight years" and transfer wealth from the Midwest "to the West Coast and New England."

Murray won national attention in 2007 when a cave-in at a Utah mine co-owned by one of his companies killed six miners. In television interviews, Murray defended his company's safety record and said an earthquake caused the collapse.

A year later, the federal Mine Safety and Health Administration fined the mine operators $1.34 million for safety violations that directly contributed to the miners' deaths, records show.

While Midwestern coal interests rarely contribute to California campaigns, Murray Energy also donated $30,000 to the campaign for Proposition 23, a November ballot measure backed by the energy industry that would suspend the state's landmark global warming law, AB32, until the state's unemployment rate improves.

California Watch is a project of the Center for Investigative Reporting. E-mail Lance Williams at lwilliams@californiawatch.org.