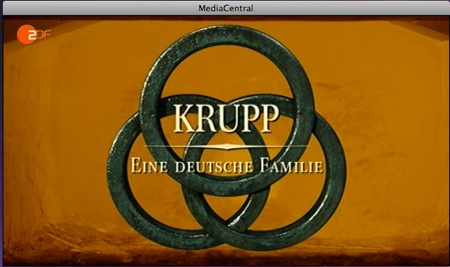 A Freehold Twp., New Jersey man reveals in a newly-release book “The Cannon King’s Daughter: Banished from a Dynasty, the True, Untold Story of Engelbertha Krupp,” that his great-grandmother was Engelbertha Krupp, the banished and disinherited daughter of Alfred and Bertha Krupp from Nazi Germany’s 400-year-old industrial dynasty of Essen. Her banishment from the family’s dynasty was kept hidden by her parents for almost 135 years. Her birth records believed destroyed at the church in Essen where she was baptized.

While conducting research on his family on Ancestry.com in 2008, Stroebel’s family tree took the most unusual turn. After discovering his great-grandparents’ names on census records he reached out to find out more about them. He had contacted distant relatives he had never known before. They told him that his great-grandparents worked for Kaiser Wilhelm I, the Emperor of Germany and that the true identity of his great-grandmother was Engelbertha Krupp from the famous steel and armaments manufacturer in Essen. The author investigated these and other revelations for 18 months and uncovered facts along with photographic evidence to corroborate these and other revelations. He is now reintroducing her to the world and to her rightful and legal place as heiress to the Krupp Empire next to her deceased brother, Friedrick Krupp.

After disobeying her father’s orders to break off her engagement with Stroebele, it is believed that, like other Krupp family members threatened with disinheritance over the years, that daughter Engelbertha was banished and disinherited from her family dynasty around 1874. It is the conclusion of the author that her banishment and disinheritance was kept secret by her parents. Although no physical proof exists, the author believes that her very existence was stricken from the church books of the Market Church in Essen where she was believed to have been baptized. Engelbertha, a Protestant, married the author’s great-grandfather at St. John’s Catholic Church in Sigmaringen, Baden-Wurttemberg, Germany in August 1875 before immigrating to Jersey City, New Jersey in 1882.

Engelbertha Krupp’s absence from the Krupp landscape had a profound effect on history. Her brother, Friedrich Krupp became the sole heir to the vast Krupp Empire, leaving her completely out of any inheritance. Friedrich’s daughter Bertha Krupp (1886-1957) eventually inherited the empire upon Friedrich’s death in 1902 resulting in an arranged marriage to Gustav von Bohlen und Halbach by Kaiser Wilhelm II. That marriage produced Alfried Felix Alwyn Krupp von Bohlen und Halbach (1907-1967), the most notorious Krupp of all who used slave labor from Auschwitz Concentration Camp in Krupp factories during WWII. Alfried Krupp was convicted at the Nuremberg Tribunals for crimes against humanity and sentenced to 12 years in prison.

Under German law at that time, Engelbertha was the most eligible Krupp to inherit her father’s empire since she sired three boys- compared with the two girls that brother Friedrich sired. The author contends that given the kind, compassionate, and respectful lives her three sons lived in America (one being the author’s grandfather) is proof they would never have aligned themselves or the Krupp Works with the Nazi Party during World War II. Alfried Krupp von Bohlen und Halbach gave Adolf Hitler and his military immense firepower allowing the dynasty’s war machine to reach as far across the globe as it did.