Chevron under fire for supporting 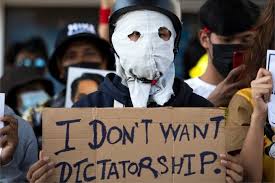 WASHINGTON, April 17, 2021 (GLOBE NEWSWIRE) -- Energy giant Chevron is under fire for its decision to continue to support the Myanmar military, which has killed more than 700 people, including at least 47 children. On Friday, half a dozen demonstrations took place in cities around the US organized by the International Campaign for the Rohingya, SumOfUs, and many other groups -- in San Francisco, LA, Houston, Denver, New York and Washington DC.

Simon Billenness, Executive Director of the International Campaign for the Rohingya said: “As the largest US investor in Myanmar, Chevron has for many years not just bankrolled the Myanmar military, but also served as the junta chief lobbyist and defenders in Washington DC.”

Groups are urging Chevron, French energy giant Total, South Korea’s POSCO, and all other oil and gas companies operating in Myanmar to suspend payments made to the state-owned oil and gas company -- and instead place those payments in an escrow account where they will be released once democracy is restored. More than 94,000 people have signed petitions by campaigning groupsSumOfUsand theInternational Campaign for the Rohingya. ...

Factbox: Oil majors in Myanmar in spotlight after UN call for sanctions

Companies such as France’s Total or U.S.-based Chevron have worked for decades with the Myanmar Oil and Gas Enterprise (MOGE), which, according to the UN investigator, “is now controlled by the military junta and represents the single largest source of revenue to the state”.

Below are facts about Myanmar’s energy sector and the main players.

France’s energy major has been a key player in Myanmar since 1992, developing the country’s top gas fields, Yadana and Sein, which started producing gas in 1998.

Located off Myanmar’s southwest coast in the Gulf of Martaban, the Yadana fields primarily produce gas for delivery to power plants in Thailand.

The fields also supply the domestic market via an offshore pipeline built and operated by MOGE, according to Total.

Over the past decade, the share of Total production from the fields fluctuated between 13,000-21,000 boed.

Even though volumes are modest, they are important for Myanmar.

A consortium led by Total also won the rights to develop a terminal to import liquefied natural gas into an offshore terminal at Kanbauk, a 1,230 MW power plant and the supply of electricity to Yangon, to start up in 2023.

Total, which employed 247 people in Myanmar in 2019, has said it was monitoring events and possible sanctions closely and was currently focusing on the safety of its workers. It said new projects in Myanmar were not a priority.

In 2002, four refugees from Myanmar filed a lawsuit against Total in Belgium.

The four refugees also sued Total’s chief at the time, Thierry Desmarest, for complicity in the torture and forced labour of workers who were building a pipeline from Yadana.

Total has denied funding the military but has said the military paid soldiers to protect installations and workers. Total has repeatedly said Yadana was exempt from sanctions and it was acting as a positively engaged actor in the country.

The case was closed in 2008 after several years of deliberations over whether the plaintiffs had the standing to bring the lawsuit because they were not Belgian citizens.

The United States’ second-biggest energy company Chevron is a partner of Total in Yadana with a 28.3% stake. Its share of production stood at 15,000 boed in 2019, also just a fraction of its global output of 3 million boed.

Chevron says its deal with Myanmar on Yadana expires in 2028. Chevron also has a 28.3% non-operated interest in the pipeline company that transports gas to Thailand.

The pipeline is known as Moattama Gas Transportation Company (MGTC) and has MOGE and Thai PTT as partners.

Chevron has been disclosing payments to the government of Myanmar via the Extractive Industries Transparency Initiative (EITI). According to EITI data, Chevron paid around $50 million to Myanmar between 2014 and 2018.

According to EITI’s reports, payments to MOGE are with oil and gas in kind.

According to Reuters calculations, based on figures disclosed by Total for Yadana payments and Chevron’s share in Yadana, Chevron’s payments to MOGE could be around $560 million between 2015 and 2019.

Thailand’s PTT Exploration and Production, the upstream arm of state firm PTT, is a participant in all three major functioning projects in Myanmar. Thailand imports some 1,400 million cubic feet per day (mcfd) of gas, half of which comes from Myanmar. Since the military coup, PTTEP has said operations remain normal.

In Yadana, PTTEP has been a partner of Total, Chevron and MOGE since 1992. According to Reuters calculations, based on figures disclosed by Total and PTTEP’s share in Yadana, PTTEP payments should have amounted to close to $640 million between 2015-2019, including around $500 million to MOGE.

PTTEP also has an 80% interest in the Zawtika project (M9), which has been producing gas since 2003. MOGE has the remaining 20%.

The Australian company said this month it was cutting its presence in Myanmar amid concerns over violence by security forces.

Woodside is active in exploration in Myanmar and started a fresh drilling campaign in January. It is exploring for oil and gas on blocks A-6, A-7, AD-1, AD-7 and AD-8.

Block A-6 is the most advanced and includes the drilling of up to 10 deep-water wells. Woodside says that since 2014 it has invested more than $400 million in Myanmar.

The company plans to export gas by a-265 km pipeline to the Yadana complex and distribute gas via existing infrastructure.

Woodside owns 40% in A-6. Other partners are Total and Myanmar’s MPRL E&P.

Shell is a partner of Woodside in block A7. Each hold 45% in the project with Woodside being the operator.

Other global firms such as Equinor and ConocoPhillips divested from Myanmar over the past years.

MYANMAR ON THE GLOBAL MAP

The country’s proven natural gas reserves totalled 1.2 trillion cubic metres as of 2019, according to BP’s Statistical Review of World Energy, or around 0.5 % of global reserves.

Energy thinktank Wood Mackenzie estimates that because of the coup new upstream projects worth $2 billion up until 2030, including the A6 project, now risk further delay.

“Key developments such as PTTEP’s Zawtika and Woodside’s Block A6 account for around 40% of the country’s expected supply until 2030,” said WoodMac’s Saloni Kapoor, adding that that incremental supply was critical to make up for declining volumes from legacy fields.

“Any tough counter-measures would drive Myanmar ever closer to China,” said Kaho Yu, senior analyst at thinktank Maplecroft. China has engaged with both the military and the Aung San Suu Kyi-led governments.