America, The Imperial - A Poem by Sherwood Ross - The Constantine Report
0 SHARES

American Terrorism » America, The Imperial - A Poem by Sherwood Ross

America, The Imperial - A Poem by Sherwood Ross 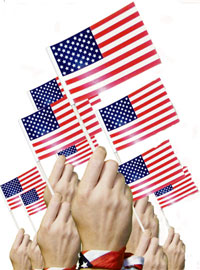 I write to you in my last hour

In the last hour of the night

The hour of fear before the light

The hour of persecution and execution

Of the headsman’s bloody institution

Of prisoners dragged from their cells

I write to you from the land of discredited dreams

Of delicate white petals spilled upon the floor

Like semen wasted in the fingers of a whore

Of American dreams twisted into nightmares

Of a president’s lying schemes

For which Christ has no parable, no metaphor.

I write to you when poets are beaten in the streets

When students are shot dead for protesting war

And never question what their work is for.

I will show you the land of the dying cities

Where the many see little hope to get ahead

Where few among the poor wear caps and gowns

And lines are lengthening for hot soup and for bread.

The gardens of pleasure of my youth are withered

The gray Tudor mansions stand in ruins along the beach

I would not dare to step inside and eat a peach.

High winds off the Atlantic drive the rain

Through the broken shards of windowpane

And the wind slams the unlocked doors

And tidal surges spill inside and rot the floors.

In America, The Imperial,

To details: “Send this detail here! Send that detail there!”

After all, war is no Saturday sail on a pleasure skiff

War is a guided missile fired from a battleship.

War is the champagne of the Pentagon brass

Step right up and try the latest weapons

We got your wars right here!

Step right up and kill a guerrilla!”

I write to you of Panama and Viet Nam

From the ruins of Iraq and Afghanistan

Of nations where our armies’ flags have flown

And from Guatemala, Chile, El Salvador, and Iran

Among the many nations we have overthrown.

I write of plots to shake the planet from its course

Not cheap schemes to fix the action on the Paris bourse

But to move great armies onto foreign soil

To gain control of pipeline routes and precious oil.

I will take you to the dungeon

I will take you to the cell

Let us pay an uninvited visit

To one American white hell.

Hakim was an Afghan artisan

The Americans allowed no lawyers

No Red Cross and no bail

They forced him to go naked

They shaved off his beard and hair

When they put the hood over his head

He thought he’d die for lack of air.

Hakim had nothing to confess to

Still, they knocked him to the floor

Soldiers stomped his back and kicked his legs

Until he could stand no more

They chained his hands to the ceiling

For ten days and ten nights

Longer than Jesus hung on Calvary

So much for human rights.

Now and in the

hour of our death.

“Tell me which way is Mecca?

Let me face the holy city.”

But the soldiers denied him

Yet the soldiers denied him again

And their boots made pulp of his legs

So that he never again would stand.

Hakim believed that in the end time

He would see his wife and children

For the Qur’an prophesied the Qiyamah

When God will pass judgment upon all men

And Hakim believed loved ones would be reunited in His mercy.

How his family must wonder of his whereabouts

For he vanished from the earth and from their sight

Rendered, kidnapped by the Americans

Now and in the hour of our death.

Named for the father of his race

He had lived too long; he had seen too much

And endured nightmares he could not erase.

Once the idealistic, studious student

From a renowned science high school in the Bronx

He owed his medical education to the Army

And so he performed for them as he was told

They made of him the arbiter of

How much pain prisoners’ could endure

Abraham, how quickly you grew old!

It was strictly against the Hippocratic Oath

Sworn to do no harm, he went along when

Upon the rough, concrete prison floor.

Some were dead in the morning, doctor,

Some were dead. Others by the thousands

By the ten thousands

By the hundred thousands

Dragged from their homes

Flung into a hundred prisons

From Thailand to Morocco

From Poland to Iraq

By the United States of Corrections

Jailer to the world! King of Incarcerations!

Prisons in the holds of creaking ships

Prisons on islands in the tropic seas

A riding academy in rural Lithuania

Prisons hidden from the Red Cross

Prisons of the hopeless

Prisons of the lost

Prisons of the Yankee double cross

Stripped of their clothing

Their dignity, their rights

Set upon by maddened dogs

“Why are you doing this to me?” One

Girl kept crying. “Because you are a

Terrorist, it’s no use denying.”

Children covered with mud before their father’s eyes

Men told to talk or the jailers would rape their wives

A seraglio of suffering Made in USA

A quarter of a million arrested in error

In the name of the fraudulent War on Terror

As one Arab businessman

And many a man they accused of jihad

They threw in isolation until he was driven mad.

I write to you in the hour of the false dawn

When morning only deepens the darkness

When prisoners yearn for the sun and there is no sun

Only the white lights of their illuminated rooms

The twenty-four silence of their isolation cells.

The twenty-four hour silence of their isolated hells.

Holy Mary, Mother of God, Pray for us sinners, Now and in the hour of our death.

The guard said, “He’s talking crazy, out of his head.”

Thinking the man was close enough to being dead.

And on his watch too many Hakims had already died.

Hakim could not know his wife came seeking him each day

She came so often to police headquarters to inquire

The Americans threatened to arrest her as well

By now she guessed Hakim suffered inside an isolation cell

Nothing now remained of her but smoldering desire

To prepare herself for martyrdom

To perish quickly in the explosion and the fire.

On her last morning she kissed her darling children

Not letting them know it was for the last time ever

And went to those making the jihad

And they strapped the explosive belt around her waist

She thought of Hakim jailed since the American invasion

And the blast took out the walls of the police station.

Which he felt obliged to keep, yet

In his sleep as he turned and tossed

Abe dreamed it was the Nazis

That gave him the Iron Cross. Well he knew why

The medal gleamed upon his breast

Why he was promoted to colonel

Just before his discharge; why he was

Sent into retirement for a well deserved rest

Even doctors’ now must have a changing of the guard.

His promotion: payment for services rendered

He had passed each loyalty test and thought

“How easily to evil I surrendered!”

About the dreams of which Abe never spoke

His moaning, tossing, his psychosomatic cough

His integrity gone up as in a puff of crematorium smoke

Abe lived like a man with his skin peeled off.

Once the land of the free! Once the proud

Edison who gave the world the phonograph,

The inventor whose genius transformed night

Into day---an American and a benefactor

Of all humankind, honest and proud,

A man of a thousand inventions

So different from today’s death scientists

In the Pentagon’s secret laboratories

Hunched over the incubators of germ warfare,

Creating infants in Iraq stillborn with one eye

And other unimaginable grotesque conditions.

Behold the progeny of gangster presidents,

Whose Statue of Liberty

Hakim was among those let go

Crushed when he learned of his martyred wife

As long as he had breath, he would tell the tale

Americans are torturing the innocent

Inside a hundred hellish jails

What sane man turns back the clock

To the Spanish Inquisition?

We are slaving on the pyramid of Pharaoh

Slaving on his monument to death

Building his war machine with every sucking breath

With our deadly, flying chariots

We are become a nation of Iscariots.

Now and at the hour of our death. Amen.

(Sherwood Ross is an American whose poetry has been published on local television in Miami and broadly on the Internet. He worked as a reporter for the City News Bureau of Chicago and the Chicago Daily News, as a workplace columnist for wire services, as News Director for a major civil rights organization, as host of a Washington, D.C., radio talk show, and as a public relations consultant to scores of national magazines, growing businesses, colleges and universities. His has written articles for national magazines and is the author of two plays on Japan, “Baron Jiro,” produced at Live Arts TheatreCharlottesville, Va., and “Yamamoto’s Decision,” read at the National Press Club. Contact: sherwoodross10@gmail.com)