In which a brainless Hitlerette steps out of the closet -- and closes the door rather firmly behind. - AC

The year is 2013. Tila Tequila has a Hitler apologist blog and Facebook. I don't even know anymore.

Unwell? Nah. Miss Tequila just feels a connection to Jesus because both were targets of Jewish “heathens”:

Yeah, we’re guessing that Tila spends a lot of time in the Matrix. When she’s not defending Hitler, that is:

According to Tila, “Hitler was a good man.”

She wrote an essay, you guys. What more proof do you need???

Okay I am not kidding. But Tila Tequila's Pro-Hitler essay begins with "(If pictures are not showing up just refresh the page)."—

That’s true, by the way:

Wouldn’t wanna miss out on those pics!

Guys, can I ask what happened to Tila Tequila or why she is a Nazi now or should we just ignore this entirely—

"Jewluminati" is something I would have never heard of until Tila Tequila told us.

Come on guys Hitler wasn't so bad! I know this because Tila Tequila is an authority on what it means to be a decent human being. Wait what?—

So Tila Tequila is a Nazi now? That's neat. Wait. Who is she again and why do I care?—

So Tila Tequila is now an anti-Semitic Hitler sympathizer, gotta say I did Nazi that coming—

Tila Tequila is a Nazi now..well then—

Tila Tequila becoming a Nazi was the ending 2013 deserved tbqh— 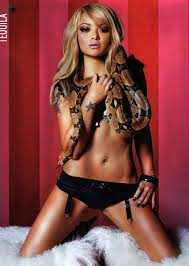 Sorry for talking about Tila Tequila, everyone.—