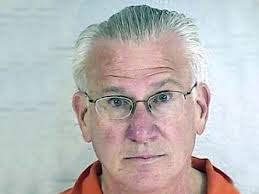 DeFUNIAK SPRINGS — Lane Rees, a former Walton County commissioner and Republican state committeeman, will serve 10 years in prison on a child pornography charge. At his request, the 62-year-old Rees was remanded to custody immediately after he pleaded no contest Thursday to one count of promoting sexual performance of a child and 28 counts of possession of child pornography.

He asked his attorney, Barry Beroset, to address the media on his behalf.

“As evidenced by his actions here today, Mr. Rees is prepared to serve his sentence,” Beroset said. “He has accepted responsibility and is remorseful for what happened,” he said. “He hopes this sends a message to others who might possess, receive or transmit child pornography.”

Beroset noted that prior to his arrest April 1, Rees’ record was unblemished and that he had dedicated his life to public service. Rees also wanted to make it clear that he had never molested a child, Beroset said, and that an evaluation conducted after the arrest indicated he was not a pedophile.

The 10-year sentence was handed down on the sole charge of promotion of child pornography.

Prosecutor Christine Bosau said Rees’ sentence, although seemingly heavily weighted toward punishment for a single crime, actually “encompasses the totality of what he did.” She called the prison term “fair and reasonable under the circumstances.”

“The defendant was cooperative and willing to accept responsibility,” Bosau said. “He said, ‘Hey, I knew I was wrong.’ ”

In the statement made through his attorney, Rees asked that his wife be treated with respect in the community.

Previous Article
Achtung, Baby: MySpace Tart Tila Tequila Comes Out as a Nazi Sympathizer
Next Article
EFSA Boss: “We were Pressured by Industry” in 2011 Nutrasweet “Study” that Declared it “Safe”

EFSA Boss: “We were Pressured by Industry” in 2011 Nutrasweet “Study” that Declared it “Safe”
Dec 11