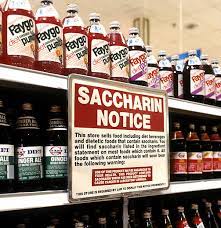 Saccharin (o-toluene sulfonamide), the artificial sweetener with an acrid after-taste, was discovered in 1897 after it dawned on industrial distillers of coal tar that there might be a use for the white powdery waste in the disposal bin. The sulfobenzoic waste is highly carcinogenic, of course, as are other coal tar derivatives, eg. creosote and pitch. No ethical manufacturer would consider marketing the toxin as a dietary supplement. Goes without saying.

Most users of saccharin are apparently unaware that they are spooning coal tar effluvium into their morning coffee --but why dispose of perfectly good hazardous waste when the weight-conscious are clamoring for a simple solution to an agonizing metabolic debacle. They believe that they have found it in Sweet-n-Low -- a cynical bastardization of the American Dream, to be sure, immoral, but the profits are simply enormous. Hospitals, physicians, Pharma and the undertaker love the windfall poison, too. It's ...

The Sweetest Encounter: Discovery of the First Artificial Sweetener

Artificial sweeteners are commonly found in many “diet” varieties of food and drinks: from soft drinks to bakery goods, canned fruits and syrups. These sweeteners are synthetic substitutes of sugar, with little to no caloric content. You might see the common ones, like sucralose or aspartame among the ingredients of your favorite snack or drink! But did you know that the discovery of the first artificial sweetener, saccharin, came from experiments with coal tar and an accidental laboratory spillage?

Ira Remsen was a passionate German chemist who flourished in his work on sulfobenzoic compounds1 [1] at Johns Hopkins University.  Around 1877, a Russian chemist, Constantin Fahlberg, had joined his lab and they were working together to oxidize a coal-tar sulfobenzoic derivative [2], o-toluenesulfonamide.

One day when Fahlberg went home for dinner and took a bite at a piece of bread, he was shocked to find it tasted incredibly sweet! He also detected that both his hands and arms also tasted sweet, even though he had washed them thoroughly! He concluded that the sweetness came from insoluble remnants of an earlier chemical spillage over his hands. Being desperate for answers, he returned to the lab and tasted all the glassware on his bench until he found the substance with “eminent sweetening power.” [4] This turned out to come from an overboiled mixture of o-toluenesulfonic acid, phosphorus pentachloride and ammonia, which resulted in o-benzosulfimide. Remsen and Fahlberg published their discovery in 1879, describing the compound as “even sweeter than cane sugar." ...

You may be wondering how can a molecule like saccharin, that is not sugar, tastes sweet? This is actually a result of its specific molecular shape, allowing it to trigger sweet taste receptors on the tongue through a lock-and-key mechanism. These receptors transmit electrical impulses to the brain, creating the perception of sweetness. ...

PRODUCTION MOVES TO THE REICH

... Around 1900, there were several saccharin manufacturers active in the German market. Fahlberg had protected the trade name “Saccharin” in 1896, so competing companies were forced to market their chemically identical products under different names, e.g.:

At the end of the 19th century, the German Empire was the chief exporter of sugar worldwide, and the sugar industry was correspondingly powerful. In July, 1898, it succeeded in arranging for the adoption of the “1st Sweetener Statute”. The statute – apart from introducing a labeling requirement – forbade any use of saccharin in many foods produced in large quantities completely (see “The Five German Saccharin Statutes“).

From a present-day point of view, such limitations might be regarded as eco-friendly, but at the time, nothing but economic interests stood behind them. The sugar industry wanted only to keep competitors off its back. Fahlberg thus complained, for example, about the legal prohibition against sweetening wines with saccharin. ...

After the end of the Second World War, the IG-Farben Industry Leverkusen plant (the future Bayer AG) was granted the first license for German saccharin production. Other licenses followed, including to both Casella and Hoechst in Frankfurt. In the early post-war years, incidentally, blue-collar workers at Hoechst received, as a gift from the company, special supplies of saccharin for their personal use.

In the Russian occupation zone, plants and manufacturing equipment belonging to von Heyden were dismantled and shipped as “reparations” to the Soviet Union. Meanwhile, Fahlberg, List & Company found itself unable to obtain sufficient amounts of coal to produce the necessary toluene for full-scale saccharin production, and of the limited amounts of saccharin they did manage to make, most had to be shipped to the Soviet Union. Saccharin ended up in short supply nearly everywhere, such that it became a cherished item for exchange on the black market. At the time of the currency reform in Germany’s three western zones (1948), 38 different artificial sweetener manufacturers had been licensed. ...

As early as 1906, saccharin became controversial because of food additive concerns prompted by Upton Sinclair's The Jungle. Harvey Wiley, the head chemist at the US Department of Agriculture, proposed a saccharin ban; but President Theodore Roosevelt, who needed to lose weight, declared, “Anyone who says saccharin is injurious to health is an idiot.” Wiley’s career was finished.

Saccharin’s use became widespread during World War I because of a sugar shortage. In the 1960s, it began to be promoted for weight loss, most familiarly under the trade name Sweet’n Low (Cumberland Packing Corp., Brooklyn).

Soon thereafter, food scientists discovered that saccharin causes bladder cancer in rats. In 1977 an act of Congress required the sweetener’s packaging to bear a cancer warning label. But in 2000, scientists found that humans metabolize saccharin differently from rats. The warning label requirement was rescinded. ...

The Pursuit of Sweet

... In the years to come this pattern would repeat itself. Uncertain science provoked regulatory action—dismaying major segments of industry and the public, while invigorating those who saw regulators as protectors of the public welfare. Industry and regulators each had their own scientists and often their own incompatible sets of scientific evidence. The notion of scientific consensus began to break down as questions of safety became more complicated; the relationship between industry and regulators grew antagonistic as medical evidence became less conclusive and more open to interpretation.

With scientific consensus on safety issues no longer tenable, regulations would be increasingly made in public, often by the public—those consumers who considered themselves just as capable of interpreting the evidence as the so-called experts. For saccharin this regulation by the public reached its apogee in the 1970s, but the pattern had established itself as early as 1908.

Saccharin suffered minor setbacks in the coming decades, but every time it emerged more popular than ever. As a check on Wiley’s growing power and at the request of industrialists, in 1910 President Roosevelt created the Referee Board of Consulting Scientific Experts. The board’s first task was to examine the effect of sodium benzoate and saccharin on human health. The board, chaired by Ira Remsen, declared saccharin harmless in small doses. The next year Wiley won a small victory. He argued that because of saccharin's ubiquity, average consumers would ingest more of the sweetener than allowed for by Remsen’s scientists. From July 1912 food regulations would treat saccharin as an “adulterant,” prohibiting its use in processed foods. Industry lawyers fought back, and regulators wavered. A March 1912 decision upheld the earlier ban but also declared the evidence for saccharin’s harmfulness as weak. Instead, it argued against replacing sugar with saccharin because the former possessed food value while the latter did not. Of course, this point made saccharin immensely popular for dieters since it provided sweetness without calories. The pattern continued with interest groups fighting over the definition and consequences of “incontrovertible scientific evidence.”

The ban on saccharin in processed food was the outcome of a bureaucratic stalemate between regulators and industry. No incontrovertible evidence proved saccharin harmful at regular doses. Both sides offered evidence to support their claims, and neither could agree on a common definition of “harmful.” Because no objective test existed, any experimental data was by definition controversial.

Whatever its scientific merit, the prohibition had little effect on public perception. Though saccharin couldn’t be used in processed food, it could be sold directly to consumers. When World War I caused a sugar shortage and consequent price spike, Monsanto, then the largest saccharin producer, took its case to the public in full-page ads, arguing that widespread use of saccharin could save the country millions of dollars. Price-conscious consumers responded, buying up saccharin tablets for 15 cents a box at local drugstores. When the war ended, saccharin use dipped as consumers returned to sugar. U.S. entry into World War II in 1941 provoked another sugar shortage, and saccharin returned as a sugar substitute. But post–World War II, changing American eating habits meant saccharin soon became more than just an alternative sweetener. ...