A Neo-Nazi Medic in Afghanistan

" ... [A] picture shows him surrounded by Afghans he refers to as 'my nignogs' with a friend adding the comment 'it's lovely to see a white man back in control of the subhuman'. ... " 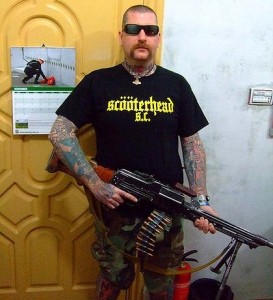 A NEO-NAZI organiser from Victoria has been working as a private military contractor in Afghanistan, mocking locals and holding secret ceremonies commemorating the deaths of German soldiers in World War II.

Kenneth Stewart, 36, has worked as a military-trained paramedic, accompanying aid workers around Afghanistan. His Facebook page shows a swastika flag in his room in Kandahar, and another picture shows him surrounded by Afghans he refers to as ''my nignogs'' with a friend adding the comment ''it's lovely to see a white man back in control of the subhuman''. On Stewart's Facebook page he regularly makes disparaging comments about Afghans, Aborigines, Jews and others.

He has worked as a medic for several aid groups based in Kandahar, including the United Nations Development Program. 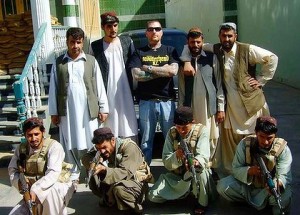 The Age made several attempts to contact Mr Stewart, but received no reply.

In Melbourne, he helps recruit white supremacists to the local branch of the Southern Cross Hammerskins, an international neo-Nazi group. He described himself on one internet forum as a ''skinhead, mercenary, pork-eating viking; not bad just misunderstood''.

Anti-facist groups in the US say there are growing numbers of neo-Nazis working in the expanding private military sector, and that the Hammerskins are considered to be among the best organised and most violent neo-Nazi groups in America.

The beliefs and photos posted by Mr Stewart have been condemned by the United Nations and the contractor who hired him on their behalf. Spokesman Brian Hansford said the UN was ''horrified by these … disturbing images''.

On Armistice Day last year, Mr Stewart posted on a white supremacist website that he and his colleagues in Kandahar had a service commemorating World War II soldiers, including Germans and Italians ''that did what they thought was right regardless of which side they were on''.

The Age has not been able to establish who Mr Stewart worked for in Afghanistan last year, but it is clear from photos on his Facebook page that he was doing similar work. One Australian security company that has employed him said it repudiated any far-right views and said the images he posted on Facebook should be removed.

Security experts say any Nazi or racist references could risk endangering the Coalition troops fighting under the NATO banner, including personnel from the Australian Defence Forces.

In the US, an intercepted 2009 email purported to show Oregon fascist organiser Randy Krager warning his colleagues not to email him about his racist skinhead group while he was working in Afghanistan. The email read: ''All communications from the mid-east are monitored by dept. of defense and/or cia … so I will have some contact but will not be able to discuss any business, not even vaguely.''

The Southern Cross Hammerskins also organise music festivals where far-right bands perform in front of vetted audiences. Their next festival is on the Gold Coast next month.