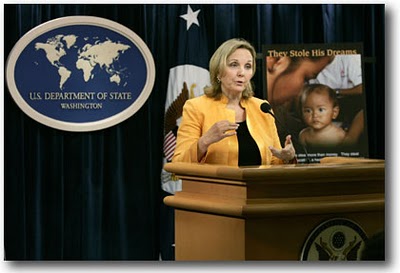 Despite controversial past, World Food Program chief gets to work

ROME: Fitting easily into the most conservative wing of the Bush administration, Josette Sheeran was from the outset a controversial candidate to run the World Food Program, the world's largest humanitarian aid organization, which has frequently been at odds with Washington.

She had already been appointed to senior roles in the government, with the A-list of connections common in that circle, from Condoleezza Rice to Jack Kemp, the former New York congressman and free market proselytizer.

Facing questions about her background, Sheeran, now ensconced as the group's executive director, sighed in exasperation. ...

The United States, as the largest donor, has traditionally exercised enormous influence in the selection of the group's director. But this time around, the European nations were dismayed enough by Sheeran's credentials that they tried to block the appointment. The EU strongly favored a Swiss candidate, Walter Fust, a European diplomat said, speaking on the customary condition of anonymity. ...

Sheeran says she was picked in a "rigorous process," and that she had been well prepared for the post....

Sheeran was born in 1954 and educated at the University of Colorado. Shortly after college she joined the Reverend Sun Yung Moon's Unification Church, and was a powerful figure at the politically conservative organization, moving steadily up the masthead of Church-owned newspapers and eventually joining The Washington Times, the right-wing newspaper which is owned by the church.

She spent more than a decade at the paper, eventually becoming its managing editor. During that time, she gained a large measure of recognition: a Pulitzer Prize juror for foreign news in 1996 and chairman of the cartooning jury in 1997.

But her tenure was not without its quirks. In April 1992, she became the first and only American journalist to interview the North Korean dictator, Kim Il Sung, whom she described as a "reflective confident elder statesman." At that moment, Kim's policies were propelling his country into a decade of famine, which ultimately killed at least half a million people.

Sheeran refused to discuss her long tenure as a major figure in the Unification Church. "My faith is a deeply personal matter," she said.

Before she left the paper - and the Church - in the late 1990s, she was named by Washingtonian Magazine as one of the 100 most powerful women in the capital.

She said she was inspired to a life of public service by her father, Jim Sheeran, a highly decorated World War II veteran and New Jersey state official who died in July. In particular, she recalled how her father, upon returning from the war, organized a food drive to help the same European villages he had helped to liberate.

When Sheeran was sworn in to recent government jobs, her father was unfailingly at her side. But they have not always seen eye to eye. A 1976 Time magazine article about distraught parents trying to deprogram children who had joined the Unification Church described Sheeran's efforts to "rescue" Josette, 21, from a church-run school that he accused of "cruel and exotic entrapment" of "minds, souls and bodies."

After leaving journalism, she became the head of Empower America, a Reagan-era conservative research institute that is dedicated to fighting poverty through free market forces and individual responsibility. Later, she moved to the Bush administration, where she specialized in programs aimed at moving developing nations towards economic self-sufficiency. ...

Sad to see how malicious and hateful some rightwingers can be about feeding people adequately. So many times they say that someone or other is crazy for not being like them; but then they turn out to be the ones who are flat bugshit crazy starving children to death for the sake of their theology born in hell. Read it yourself; the new testament comes first with servant leadership as the centerpiece. It is really pretty simple; It says that a person should house, feed, and care for the poor, not ill and kill them off. See? Simple. . .