Trauma of 9/11 Appears to have Altered Brains, Study Suggests 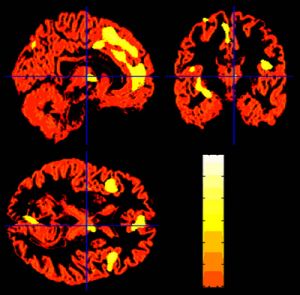 Magnetic resonance imaging of the brains of healthy adults more than three years after Sept. 11, 2001, shows areas that have less gray matter volume in those who were near ground zero on 9/11, compared with those who were much farther away. This is three views of the brain areas that have lower gray matter volume in the 9/11-exposed group. Notably, all of these areas (which show up brighter in this image) are associated with the processing of emotion.

Healthy adults who were close to the World Trade Center during the terrorist attacks on Sept. 11, 2001, have less gray matter in key emotion centers of their brains compared with people who were more than 200 miles away, finds a new Cornell study.

"This suggests that really bad experiences may have lasting effects on the brain, even in healthy people," said Barbara Ganzel, the study's lead researcher and postdoctoral fellow at Cornell's College of Human Ecology.

The study -- one of the first to look at the effects of trauma on the brains of healthy adults -- is published in the April issue of Neurolmage. It follows a Cornell study by the same authors that found people living near the World Trade Center on 9/11 have brains that are more reactive to such emotional stimuli as photographs of fearful faces. Combined, the two studies provide an emerging picture of what happens in the brains of healthy people who experience a traumatic event.

The smaller volume of gray matter -- composed largely of cells and capillary blood vessels -- that Ganzel found were in areas that process emotion and may be, Ganzel suggests, the brain's normal response to trauma. The subjects in the study did not suffer from any mental or physical health disorders. Gray matter, a major component of the nervous system, is composed of the neuron cell bodies that process information in the brain.

Key brain areas that are smaller are also more responsive to threat, said Ganzel, suggesting that these changes may be a helpful response to living in an uncertain environment.

"We have known for a long time that trauma exposure can lead to subsequent vulnerability to mental health disorders years after the trauma," Ganzel added. "This research gives us clues about the biology underlying that vulnerability."

The researchers used two types of magnetic resonance imaging to scan the brains of 18 people who were within 1.5 miles of the World Trade Center on Sept. 11 and compared them to scans of 18 people who lived at least 200 miles away at the time. One type showed the gray matter volume, and the other showed the brain's response to emotional stimuli (pictures of fearful and calm faces). Those who were close to the disaster on Sept. 11 showed more emotional reactivity in the amygdala, a brain area that detects the presence of threatening information.

Combining the brain data revealed that those who were near the World Trade Center had smaller, more reactive amygdalas, and this, in turn, was related to how anxious they were years later. Several other brain regions associated with emotion processing were also smaller in those who were close to the disaster.

The researchers also found that study subjects who had experienced other types of trauma (violent crimes, sudden death of a loved one) showed a similar reduction in gray matter and similar response to emotional faces and anxiety.

"This suggests that the differences we see in the brain and behavior of people who were near the Sept. 11 disaster are not specific to that one event," Ganzel said. "And it turns out there is a very similar pattern of gray matter volume loss with normal aging, which raises the question of what role trauma plays in the aging brain."

This news is brought to you by PhysOrg.com