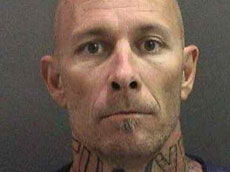 SANTA ANA - An Orange County prosecutor told a jury Wednesday that a heavily tattooed white supremacist was the leader of a death squad who executed a gang member for violating gang code by divulging secrets in a television interview.

Deputy District Attorney Ebrahim Baytieh said defendant Billy Joe Johnson, 46, showed a "complete and utter disregard for human life" when he led Scott Miller, one of the founders of the Public Enemy Number One gang, to his death in an Anaheim alley on March 8, 2002.

Co-conspirators and fellow gang members Michael A. Lamb and Jacob Rump were waiting in the darkness when Johnson showed up with Miller, 38 under the pretense of buying drugs, Baytieh said in opening statements. Lamb then popped out from a hiding spot and shot Miller once at near point-blank range in the back of the head.

In an unusual move, defense attorney Michael Molfetta then told the jury in his opening statement of Johnson's death penalty trial that he agreed with everything the prosecutor said.

Molfetta said Johnson is a product of a violence-prone prison system and that he did not have any choice but to participate in Miller's murder for violating PEN1 gang rules by appearing on a Fox television news show.

Johnson is charged with first-degree murder plus the special circumstances of committing a murder for the benefit of a gang, murder-by-lying-in-wait and committing multiple murder. He is already serving 45 years to life term in prison for a separate gang-related murder in 2004.

Molfetta said Johnson – who sat smiling and chatting in the ninth floor courtroom during the opening statements – wants to receive the death penalty rather than a sentence of life without parole. Johnson feels that life on Death Row at San Quentin prison would be preferable to life in a maximum security prison, Molfetta said in an interview.

Lamb and Rump were both convicted of Miller's murder in 2007. Lamb, the triggerman, was sentenced to death. Rump got life without parole.

Johnson, who has a Mohawk style haircut, was not charged with killing Miller until 2007 when he got on the witness stand in Lamb and Rump's trial and testified that he acted alone in the execution-style slaying.

But Baytieh told the jury today that Johnson lied on the witness stand in order to make himself a "martyr" for his gang.

Miller was murdered 13 months after Fox 11 News profiled Public Enemy Number One in February 2001, focusing on a pending criminal case against two top leaders of the Huntington Beach-based gang. Miller, who was called "Scottish" by the gang, appeared on the episodes with his voice and face disguised or blurred out. By his colleagues immediately identified him by his distinctive tattoos and his unique pit bull.

The jury in Superior Court Judge Frank F. Fasel's court must first decide if Johnson is guilty of special circumstances murder before it hears additional evidence in a penalty phase to decide if he should receive the death penalty or life in prison without the possibility of parole.

Johnson also has three prior strike convictions for a 1983 residential burglary, a 1989 robbery, and for beating an inmate in prison in 1995.

The Nazi Monster Recruited by MI6 to Spy for Britain

A Holy Mission to Reveal the Truth about Nazi Death Squads