"… I asked him why any jockey would risk getting caught, and have his career ended, and Macklin explained, ‘The money. Horse racing is the sport of kings, and kings don’t care about playing fair, just winning. There are very rich and powerful men wagering on these races, and they have their ways of making sure that they don’t lose.’ …"

Hunter Thompson may have been on strange drugs when he spat:,“the Kentucky Derby is decadent and depraved,” but he can't be accused of hyperbole. There was, some racing industry reporters contend, this ... temptation ... that some Derby insiders couldn’t possibly ignore …

Giacomo, the Derby “champion,” was bred, foaled and trained at Mill Ridge Farm in Lexington, KY. William W. Thomaso, father of Marcie Thomason, who died in the horrific Flight 5191 crash in Lexington in 2006,  has been the financial and administrative manager of the horse breeding farm for some 20 years.1 Thomason pays close attention to every horse at the farm, according to the Mill Ridge web site. If so, he had contact with some of those behind the alleged, by many, fix …

Jerry Moss, for instance, owner of Giacomo. Moss heads up A&M Records.2 A&M is a division of MCA Universal – the mobbed-up mass entertainment production complex that gave us Robert Strauss, the crooked Houston attorney, James A. Baker III’s former partner, and J. Livingston Kosberg’s Gibraltar Savings, a looted thrift, co-conspirator. Moss is an iconic figure in the record business. In 1961, Moss and Herb Albert of Tijuana Brass fame founded Carnival Records, A&M's antecedent, the most successful independent record company in the biz at the time.3

Some racing industry whistle-blowers maintain that the Kentucky Derby has been fixed in the past. Ben Radstein, a horse race commentator, writes that the 2003 Kentucky Derby ended in an upset when 12-1 long-shot  “Funny Cide defeated the heavily favored Empire Maker.' ...

No gelding had won the Derby since Clyde Van Dusen in 1929. Many were angered one week later whan a photo seemed to show jockey Jose Santos holding a foreign object along with his whip. To try to get to the bottom of this, I spoke to Manny Macklin, an industry insider, and publisher of the tipsheet, Mad Manny’s Pony Picks.

"That was a buzzer. You can bet the farm on that.’ said Macklin, ‘For those who don’t know, a buzzer is a simple device that can be put together with a battery and a little bit of wire.’ … I asked him why any jockey would risk getting caught, and have his career ended, and Macklin explained, ‘The money. Horse Racing is the sport of kings, and kings don’t care about playing fair, just winning. There are very rich and powerful men wagering on these races, and they have their ways of making sure that they don’t lose.’ … Macklin presented me with an exclusive photo that he had shown to no one else. It clearly shows the horse’s reaction when zapped with the buzzer. ‘There it is, plain as day. That pony just got one heller of a jolt, and that put him over the top. From the looks of it, Santos was using a really potent one.’”4

The outcome of the 2003 Derby was stunning, but Giacomo’s win in 2005, overcoming 50-1 odds, was even more unbelievable. On May 8, 2005, USA Today offered a novel theory: “Now it can be told. Given the out-of-this-world finish by Kentucky Derby winner Giacomo, maybe it’s no surprise jockey Mike Smith is from Roswell, N.M…. Might those aliens have given him a lift on his first Derby victory in 12 rides?”5 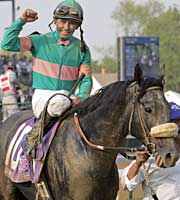 Giacomo’s win was such a shocking development that HBO boxing promoter Jim Lampley, writing in the Huffington Post, considered it “the second biggest story of our lives” -- the first being the GW Bush election.

“Oddsmakers consulted racing form data and thoroughly examined the prior times of every horse in this year's Kentucky Derby. Bellamy Road was the choice of oddmakers across the board, especially in light of his 30-length victory margin in the last race before the run at Churchill Downs.

“Oddsmakers acknowledged in their oddsmaking at that moment that Bellamy Road would win the Kentucky Derby.

“And he most certainly would have, at least if the race had been fairly and LEGALLY run. What happened instead was the BIGGEST CRIME IN THE HISTORY OF HORSERACING, and the collective media silence which has followed is the greatest fourth-estate failure ever on our soil. 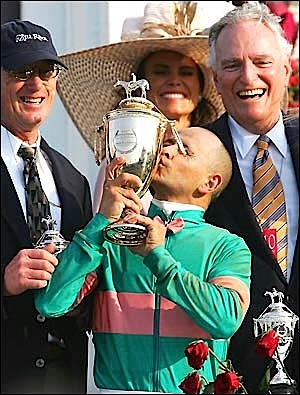 “Many of the participants in this blog have graduate school educations. It is damned near impossible to go to graduate school in any but the most artistic disciplines without having to learn about the basics of social research and its uncanny accuracy and validity. We know that triple crown events simply do not produce 50-1 longshot winners ‘out of nowhere,’ without some elaborate Rovian conspiracy to cheat and defraud the betting public. Because Giacomo was the biggest longshot to win the Derby since 1913 and the runner-up, Closing Argument (72-1), was even longer odds the trifecta payouts was $133,134.80 for a $2 bet. That kind of payout attracts those who like their games of chance with big payouts and low risk. Of course today we learn that Bellamy Road has dropped out of the Preakness Stakes and the Belmont Stakes, due to an alleged foot injury. Coincidence? Of course not.

“George Steinbrenner [whose horse finished seventh in the Derby] isn’t capable of conceiving and executing such a grandiose crime? Wake up. THEY DID IT. The silence of traditional media on this subject is enough to establish their newfound bankruptcy. … Is there any greater imperative than to reverse this crime and reestablish the opportunity for a legitimate contender for the Triple Crown? Why the mass silence? Let’s go to work with the circumstantial evidence, begin to narrow from the outside in, and find some witnesses who will turn. …”6

“Giacomo? … he was some faceless 50-1 also-ran from California owned by a Hollywood record producer. This one is going to take some time to explain — or understand. … The 131st Kentucky Derby was won by a horse that had been beaten in his last five starts, a colt whose only win in seven career starts had been a maiden race last October, a horse whose only memorable credential was that he was named after the youngest son of the musical star Sting.”7

A number of commentators in the press have stated openly that they believed the race, preserved in this video, was fixed: