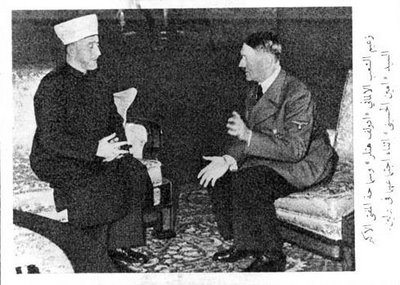 At issue now is the biographical entry for the mufti, Hajj Amin al-Husseini, on the museum’s Web site.

“The museum’s biography undercuts documented facts about the mufti, and, in an effort to be politically correct, seeks to exonerate him from actually murdering Jews and falsifies the historic record,” Carol Greenwald, chairwoman of Holocaust Museum Watch, said on Tuesday.

Husseini encouraged Arabs in Mandatory Palestine to riot and commit other violent acts against Jews. Yet the museum’s on-line biography states that whether he “explicitly encouraged or incited the violence is not documented.”

The site also says that the British “never unequivocally linked” Husseini to the 1930s Arab riots.

During World War II, Husseini allied himself with Nazi Germany and lent his support to the “Final Solution,” the extermination of the Jews of Europe. Husseini contributed to the German war effort by setting up Bosnian Muslim battalions that were attached to the Waffen SS, whose soldiers fought partisans in Bosnia and massacred civilians there. The mufti also sought to convince Germany and its allies to bomb Tel Aviv and to expand the Final Solution to the Jews of North Africa and Palestine. When he was informed of various Nazi proposals to exchange Jewish lives for goods or money, he strenuously campaigned against them.

The museum’s Web site says that impact of Husseini’s attempt to prevent the emigration of Jewish children from Europe was “nil,” and that the thousands of Balkan Muslims he recruited into the Waffen SS divisions were “generally ineffective.”

The US Holocaust Memorial Museum, which has previously changed an earlier bio of the mufti after public criticism by Holocaust Museum Watch, insisted this week that it was simply stating historical facts.

“The United States Holocaust Memorial Museum’s on-line resources make clear that the mufti of Jerusalem was a life-long ardent anti-Semite who was fundamentally opposed to the creation of the State of Israel, and later committed to its destruction.

He was a Nazi sympathizer and propagandist. During the Holocaust he actively supported the Nazis’ efforts by inciting hatred of Jews, broadcasting pro-Axis propaganda from Germany, and recruiting thousands of Muslim auxiliaries for Hitler’s SS,” the museum said in a written response.

“Others may make various claims about the influence and impact of his actions during his lifetime and today. But as a historical museum we adhere to the highest standards of research and documentation. We do not base conclusions on secondary source material. Our historical research is based on primary source documentation which must be understood through the context of the events. We believe our conclusions are consistent with the available evidence. We will continue to review and evaluate our research as new documentation comes to light.”

After the war, Husseini was arrested in France but escaped to Egypt, where he continued to be active in Arab affairs until his death in 1974.