MINNEAPOLIS — Simmering racial tensions boiled over yet again Monday night when several men shot five people who had been protesting the recent police killing of an African American man in Minneapolis. Police on Tuesday afternoon said they had arrested two suspects and were seeking others.

On Monday night, five people suffered non-life-threatening gunshot injuries when at least one person opened fire on a crowd outside the Minneapolis Police Department’s 4th Precinct building, authorities said. Afterward, police said they were searching for “3 white male suspects” who fled the scene.

By Tuesday afternoon, police said they had arrested a 32-year-old Hispanic man in South Minneapolis and a 23-year-old white man in nearby Bloomington. The suspects were not identified and no other details were released.

“We are sparing no efforts to bring any and all those responsible to justice,” Minneapolis Mayor Betsy Hodges (D) said on social media, where she called the shooting “abhorrent.”

Protesters have been camping out in front of the 4th Precinct since Nov. 15, when two Minneapolis police officers were involved in the contentious killing of 24-year-old Jamar Clark.

“Tonight, white supremacists attacked the ‪#‎4thPrecinctShutDown‬ in an act of domestic terrorism,” Black Lives Matter Minneapolis said on Facebook. “We won’t be intimidated.”

Although Clark’s family called for an end to the protests after the recent shooting, Black Lives Matter Minneapolis vowed to return to the 4th Precinct on Tuesday for another demonstration. Throughout the morning, protesters continued to gather outside the police station.

Federal authorities said Tuesday that they knew about the shooting and were working with local police during the investigation.

“The Department of Justice is aware of the incident and is coordinating with the Minneapolis Police Department to assess the evidence and determine if federal action is appropriate,” the department said in a statement.

About 10:40 p.m. Monday, police responded to the scene, about one block from the police station. Soon, 911 calls started to pour in, police said.

A video from a journalist at the scene showed people fleeing, then screaming for an ambulance. A young African American man was seen writhing in pain with an apparent gunshot wound to the leg while fellow protesters — then police and paramedics — tried to help.

Henry Habu, a nearby resident, said he was there during the shooting.

Habu said there were three men and a woman in ski masks who were filming the demonstrations. One witness reported seeing three men in masks; another reported one. Still, when protesters asked them who they were and why they were filming, Habu said, they deflected the questions. 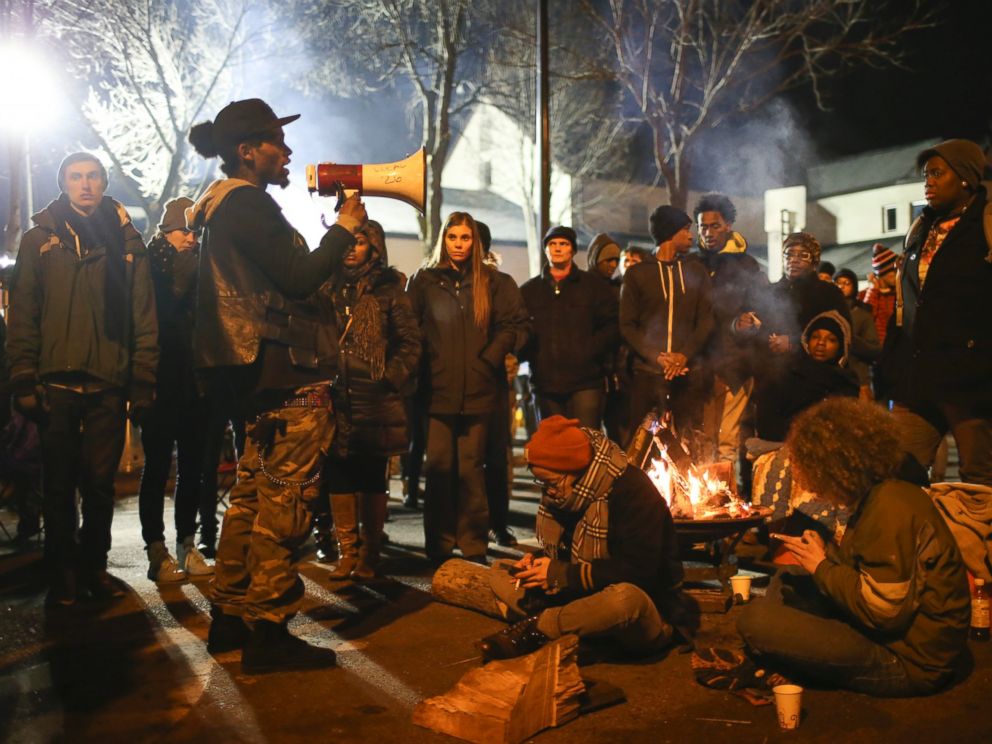 Several people involved in the demonstrations — including a Black Lives Matter organizer and the NAACP Minneapolis chapter president — have called the alleged gunmen white supremacists. Authorities, however, have not confirmed those claims.

Habu said the outsiders appeared to fit the description of white supremacists whom protesters had been told to watch out for — those wearing masks or camouflage clothing. He said that at one point, those who were wearing masks walked away, and some protesters followed them.

“They tried to fight,” he said. “There was a scuffle.”

Carrie Brown and several other older members in the community said they tried to defuse the situation.

“One of the white protesters who had been with us since the beginning said, ‘Be careful, those guys are white supremacists,'” Brown said, referring to the three men and one woman in balaclavas. “We asked them to remove their masks, asked who they were, invited them to come and protest with us peacefully once they did that.”

“One of our young men reached out and touched one of them and said, ‘Oh he has a vest on’ like a bulletproof vest,” she added.

One witness, who did not want be named, was among those who followed the outsiders up the street.

“About midway down the block the group sort of thinned out and I said, ‘Maybe we should turn around, not make them feel like we’re all up on them,’ and the minute I turned around I heard four shots,” he said. “One whizzed right by me. I was going to get down but then I just ran.”

Habu said shots rang out and he saw people disperse, running back to the demonstration camp.

Brown said she heard about 15 shots and, when she turned around, “four boys on the ground.” She said she tended to one who had been shot in the leg.

Several witness said police used pepper spray on those who were trying to help — apparently to get protesters away from the victims so that medical personnel could reach them. Brown said an officer put a gun to her face and told her to move back.

“I couldn’t move,” she said. “He [the gunshot victim] had his hands wrapped around me. They pried his hands off of me.”

Nekima Levy-Pounds, president of the Minneapolis chapter of the NAACP, returned to the scene after the shooting incident.

“I am obviously appalled that white supremacists would open fire on nonviolent, peaceful protesters,” she told the Minneapolis Star Tribune.

Rep. Keith Ellison (D), who represents the area in Congress and has supported the demonstrators, spoke out about the shooting.

“I don’t want to perpetuate rumor,” he said, according to Minnesota Public Radio. “I’d rather just try to get the facts out. That’s a better way to go. I know there’s a lot of speculation as to who these people were. And they well could have been, I’m not trying to say they weren’t white supremacists. But I just haven’t been able to piece together enough information to say with any real clarity.”

The shooting occurred the night before the one-year anniversary of a Missouri grand jury’s decision against indicting white Ferguson police officer Darren Wilson in the fatal shooting of unarmed black teenager Michael Brown. That decision helped reignite powerful frustration about the way African Americans are treated by police.

In Minneapolis, protesters have been camping out in front of the 4th Precinct since Nov. 15, when two Minneapolis police officers were involved in the contentious killing of Clark.

Authorities said officers were responding to a call for help from paramedics, who said Clark was interrupting their attempts to help an assault victim. Clark, who was unarmed, was also a suspect in the assault, police said.

“At some point during an altercation that ensued between the officers and the individual, an officer discharged his weapon, striking the individual,” the state Department of Public Safety said in a Nov. 17 statement.

Clark died in a hospital a day after being shot.

Even before his death, however, his shooting was already causing outrage. Several witnesses claimed that Clark was handcuffed at the time of the fatal shooting, although police claimed otherwise. The Minnesota Department of Public Safety’s Bureau of Criminal Apprehension is now investigating the shooting at the request of MPD.

Both Black Lives Matter organizers and the Minneapolis NAACP have called on authorities to release video of the shooting.

But Minnesota Gov. Mark Dayton (D) said Monday that video footage taken from an ambulance at the scene was inconclusive. Dayton, who met with protesters and Clark’s family on Saturday, said he has urged federal investigators to release the tapes as soon as possible.

Although largely peaceful, the demonstrations have been disrupted by several other incidents. More than 50 protesters were arrested on Nov. 16 after they shut down a highway. And on Friday, police announced they had arrested two men for spray-painting profanity on the 4th Precinct’s walls.

After Monday night’s shooting, Clark’s family has thanked protesters for their “incredible support” but said demonstrations outside the police station should stop.

“Thank you to the community for the incredible support you have shown for our family in this difficult time,” Clark’s brother, Eddie Sutton, said in a statement. “We appreciate Black Lives Matter for holding it down and keeping the protests peaceful.