The Straight Dope: Was Walt Disney a Fascist? - The Constantine Report
0 SHARES

Corpwatch » The Straight Dope: Was Walt Disney a Fascist?

The Straight Dope: Was Walt Disney a Fascist?

A Staff Report from the Straight Dope Science Advisory Board

I've heard rumors on and off for years about Walt Disney. I've heard suggestions that he was a fascist, a communist, a racist and an antisemite. The first two are of course contradictory. Web searches didn't help to straighten out anything in my mind. Was he a political nut? Did he hate blacks and Jews? Or are these typical malicious lies we like to tell about great men so we don't have to feel so unaccomplished? 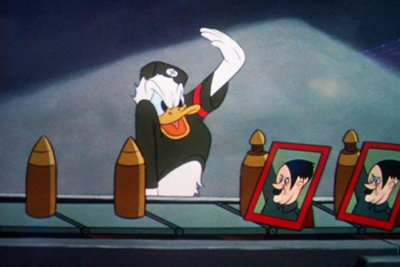 Hold it there, hoss. That's a lot of accusations for one letter. Let's try to break it down a bit and see if we can sort some things out here.

One of the more curious charges against Disney was that he was a secret Nazi. A few white supremacist groups still cherish this notion. Their best evidence is a misreading of the short film "Der Fuehrer's Face" (1943), in which Donald is seen in a Nazi uniform, swastikas and all. In the end we find out it's all a nightmare, but that doesn't dissuade the racists. A lesser-known short sometimes cited is 1932's "The Wayward Canary," in which Mickey is seen using a cigarette lighter with a swastika painted on the side.

This is all circumstantial at best, but other suggestive details have come to light. In 1933, the German American Bund was founded by Fritz Kuhn. Kuhn was evidently quite a character--he had met Hitler in the early thirties and reportedly was profoundly loathed by the Nazi leader. An association of German immigrants to America, the Bund had a definite pro-Nazi slant. Disney animator Art Babbitt claimed his boss had a strong interest in, if not outright sympathy for, the Bund:

In the immediate years before we entered the War there was a small, but fiercely loyal, I suppose legal, following of the Nazi party . . . There were open meetings, anybody could attend and I wanted to see what was going on myself. On more than one occasion I observed Walt Disney and [Disney's lawyer] Gunther Lessing there, along with a lot of prominent Nazi-afflicted Hollywood personalities. Disney was going to meetings all the time.

The German filmmaker Leni Riefenstahl, whose documentaries in the mid-30s had helped to glorify the Nazis, claimed that "after Kristallnacht [1938], she approached every studio in Hollywood looking for work. No studio head would even screen her movies except Walt Disney. He told her he admired her work but if it became known that he was considering hiring her, it would damage his reputation."

For the most part Disney doesn't appear to have had strong political views--his politics seemed to turn on whatever it took to keep his studio going. It's likely his interest in the German American Bund sprang from a desire to forge relationships with Germany for possible film distribution there. On the other hand, there was a lot of antisemitic feeling in the Disney studio. While no one can specifically attribute bias to Disney himself, Jewish people were ready fodder for the animators' gags and Disney approved every scene in every short the studio made. In one scene in the original version of "The Three Little Pigs," the Big Bad Wolf comes to the door dressed as a stereotypical Jewish peddler. Disney changed the scene after complaints from Jewish groups. They didn't catch them all, though. In the short "The Opry House" Mickey Mouse is seen dressed and dancing as a Hasidic Jew.

Disney did have heartfelt opinions about a few things -- he was virulently anti-communist and he was suspicious of unions, much like other studio heads of his day. In 1941, a strike was called against the Disney studios by animators and other artists dissatisfied that they got no onscreen credit for their work and were paid less than animators at other studios. Walt felt his company was more of a family and that the camaraderie compensated for substandard wages. He considered the strike a result of the "growing Communist conspiracy" in the United States. The dispute ended bitterly and hardened Disney's conservative and anti-communist attitudes.

Eventually he was called before the House Unamerican Activities Committee as a friendly witness, naming names of suspected communists in Hollywood. (The complete transcript of his testimony can be read at www.cnn.com/SPECIALS/cold.war/episodes/06/documents/huac/disney.html.)

Watts, Steven, The Magic Kingdom: Walt Disney and the American Way of Life, 1997

[…] had met Hitler in the early thirties and reportedly was profoundly loathed by the Nazi leader. [Read more] Share this:TwitterLike this:LikeBe the first to like this […]

The Rise and Fall of Fritz Kuhn’s German-American Bund

The New Jersey State Police and the Nazis