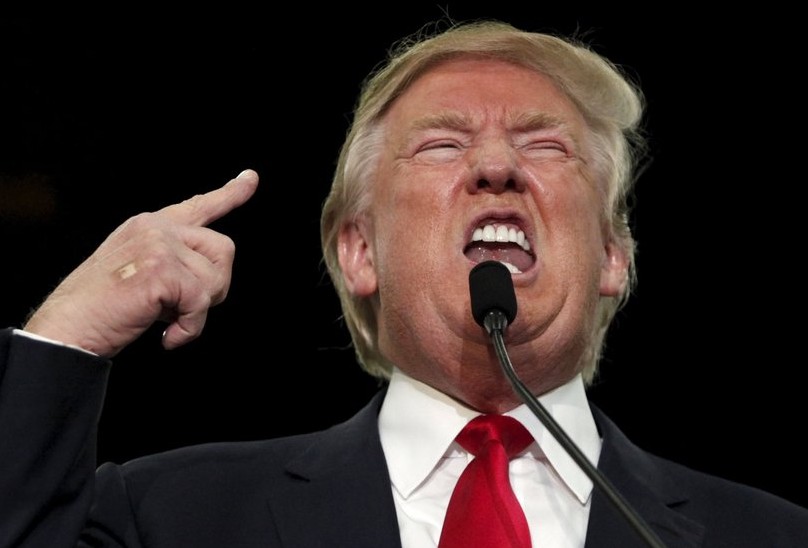 Donald Trump is not Hitler. He’s more like the leader of the German-American Bund.

It was a political moment unprecedented in American history. A charismatic leader took the stage in an arena packed to the rafters with fanatical supporters and delivered a rousing and most assuredly politically incorrect speech decrying the United States’ “suicidal tolerance of parasitical aliens, making something entirely different out of the nation, destroying its ethics, morals, patriotism, and religious conceptions.” He told his devoted audience to pledge their loyalty to him and their desires for a greater America. In the media gallery, a reporter was forcibly removed as she openly mocked the speaker. A wild-eyed protester rushed the stage but was stopped by a steady rain of fists administered to his head and torso as the crowd roared its approval.

Another day, another Trump campaign event? No, this was the Feb. 20, 1939, gathering of the German-American Bund, a Depression-era pro-Hitler organization, at their “Washington’s Birthday Rally” in Madison Square Garden. A packed house of 20,000 plus whooped it up the Bundist leader Fritz Kuhn, a man with vainglorious dreams who roused crowds by targeting perceived religious, racial, ethnic, and/or political enemies. Like Trump, Kuhn had an uncanny talent for tapping into populist sentiments. He too was an audacious egotist, a notorious truth-stretcher, and outright liar. Among other things, Kuhn bragged that he’d been part of the mob that followed Hitler into the Beer Hall putsch, though there was no proof of the veracity of this claim.

A veteran of the Great War, Kuhn was expatriated from Germany to Mexico after he was caught stealing from his employer. He then headed to Detroit, where his master’s degree in chemistry from the University of Munich was good enough to get him hired at Henry Ford Hospital—a medical facility with an employment ban on Jewish doctors. Kuhn joined the Friends of New Germany, used hospital broom closets to practice his oratory skills, and quickly rose to the top of the organization’s Midwest division. When the group dissolved, Kuhn declared that the only way for a pro-Hitler movement to succeed in the United States was by rebuilding the organization based on core American principles and the ideas of the Founding Fathers. The group adhered to a detailed constitution, one that mimicked the language of Jefferson’s Declaration of Independence in its call for the “preservation of the inalienable Right to Life, Liberty, and the Pursuit of Happiness in a truly sovereign United States of America, ruled in accordance with Aryan Christian Precepts.”

Like Trump, Kuhn was a skilled entrepreneur. Under his leadership, the Bund was transformed into a money-making machine with interests that included publishing newspapers and other propaganda, sales of Bund ephemera and uniforms, and a nationwide constellation of family retreats. Though membership numbers are at best fuzzy (records were both secretive and poorly kept), the FBI believed there were some 5,000 to 8,000 Bundists, while the American Legion estimated the Bund had numbers upwards of 25,000. Kuhn claimed he had more than 200,000 followers.

Yet America’s wanna-be Fuhrer ultimately self-destructed. In 1939 he went to prison after being caught embezzling from the Bund coffers to fund his extramarital dalliances. Stripped of his American citizenship and sent to Sing Sing, Kuhn was deported after WWII back to Germany. He died there in 1951, broken and forgotten.

With the metamorphosis of Donald Trump from real-estate mogul to Republican presidential frontrunner with a weakness for retweeting someone with the Twitter handle “WhiteGenocideTM,” it seems worthwhile to think again about Fritz Kuhn, whose ideological descendants have flocked to Trump, whether he wants their support or not. “I’m sure he would repudiate any association with people like me,” said Jared Taylor of the “New Century Foundation,” one of the groups behind an unsolicited pro-Trump robo-call campaign, “but his support comes from people who are more like me than he would like to admit.” Perhaps most notorious of all was the backing from David Duke, the former KKK Grand Wizard, one-time Louisiana GOP State Representative, and a veteran of two presidential campaigns of his own: in 1988 as a Democrat and in 1992 as a Republican. “Voting against Donald Trump at this point, is really treason to your heritage,” he told his Internet radio listeners. While noting that this was not a formal endorsement, Duke added that he supported voting for Trump as a “strategic action” and encouraged his listeners to volunteer for the Trump campaign. Pressed on the issue by Jake Tapper on CNN’s State of the Union, Trump claimed ignorance of white nationalist support or knowing anything about David Duke. When called out on this, Trump disingenuously said he misunderstood Tapper’s line of questioning, blaming it all on “a bad earpiece.”

Trump’s paterfamilias, Fred Trump, was the son of German immigrants. In 1927 a “Fred Trump” was listed in a New York Times article as one of the many arrestees at a Klan melee near his home in Queens. Conceivably, Trump the Elder had no involvement in a brawl between local Klansmen and cops; he might well have been on the wrong street corner when the rally cranked up into riot and arrests were rampant. That said, Fred Trump institutionalized his racism while building his real-estate empire in the postwar era. At the Trump housing complex in Beach Haven, near Coney Island, one tenant, the folksinger Woody Guthrie, was appalled by the blatant discrimination against African Americans that permeated rentals. Guthrie responded as only he could, firing out the lyrics that echo into the 2016 presidential race: “I suppose/ Old Man Trump knows/ Just how much/ Racial Hate/ he stirred up/ In the bloodpot of human hearts.” In 1973 Trump was investigated by the Justice Department’s Civil Rights division for discriminatory leasing violations; two years later he settled without admission of guilt. A Village Voice article quoted a Trump realtor who said word came from the top: no renting to African Americans.

Yet when it came to Jews—or at least Jewish charities—Fred Trump had a soft spot. According to his June 26, 1999, obituary in the New York Times, Trump the Elder gave generously to the Long Island Jewish Hospital, where he ultimately died of complications from pneumonia compounded by a six-year struggle with Alzheimer’s disease. 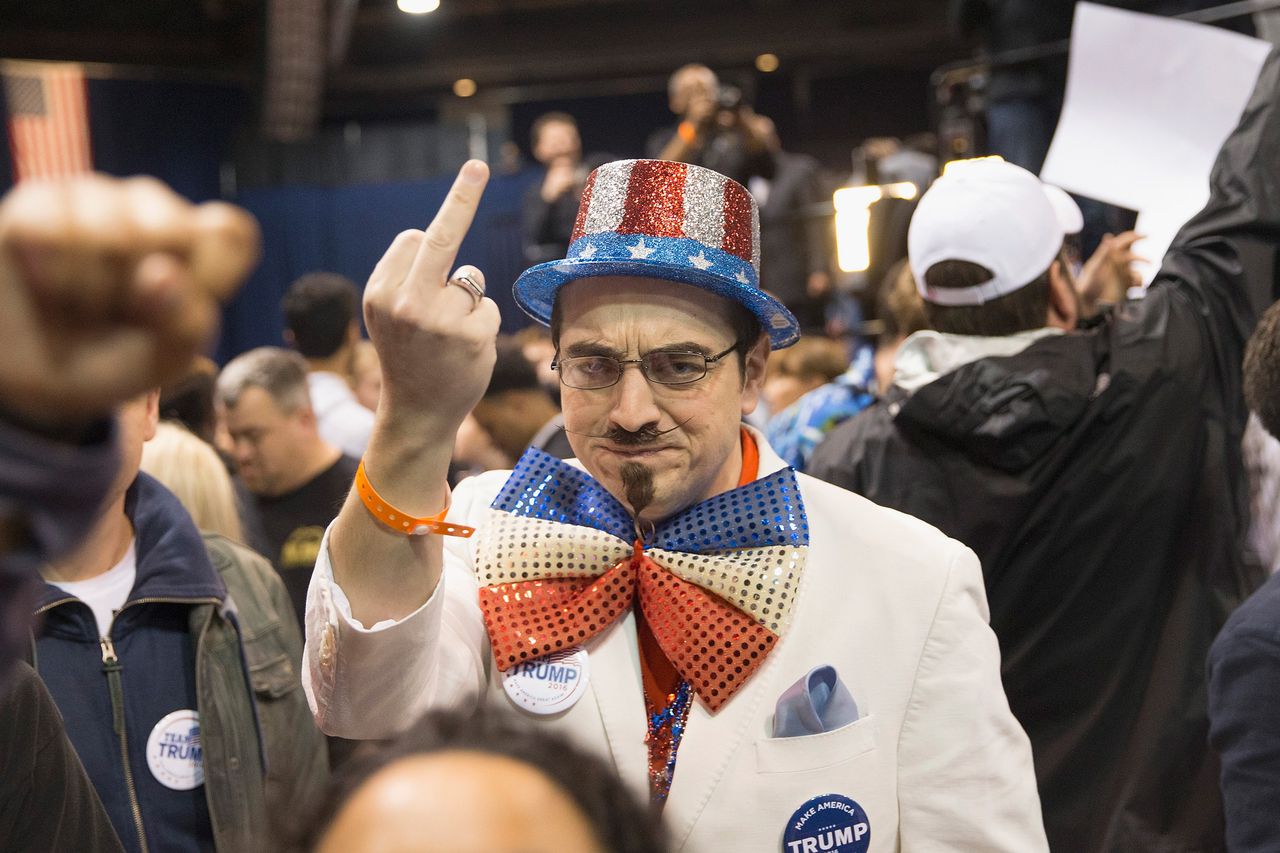 Donald Trump’s cockamamie plans to build a Mexico-financed wall on our southern border, his demands that American Muslims carry special IDs while their foreign brethren be prevented from entering the United States, or his insistence that we use torture as a negotiation strategy, hardly make him another Hitler. Rather, Trump is engendering an old fashioned American kind of hatred—the kind this country saw on that cold February night in 1939. And just as it is worth remembering Fritz Kuhn, it is also worth remembering how Americans responded to his attempt to hijack George Washington and the Founding Fathers in the name of Fascism.

In 1930s Germany, standing up to Hitler meant death. But in the United States, when Kuhn laid out his plan to 20,000 followers in Madison Square Garden, New York streets surrounding the venue were choked with an estimated 100,000 people of all stripes, from college student Trotskyites to button-down businessmen all determined to stop Kuhn and the German-American Bund. Dorothy Thompson, the journalist tossed from the event, marked this moment with pride as the second time she was kicked out by a Fascist: Thompson was the first foreign correspondent sent packing by Nazi Germany afterHarper’s published her interview with Hitler, describing the fuhrer as “formless, almost faceless, a man whose countenance is a caricature, a man whose framework seems cartilaginous, without bones. He is inconsequent and voluble, ill poised and insecure. He is the very prototype of the little man.”

Isidore Greenbaum, the Brooklynite who rushed the stage in the midst of Kuhn’s speech in a valiant attempt to take down him, was beaten en masse by German-American Bund guards. Greenbaum’s pants were ripped from his legs in the melee, after which he was tossed into the arms of New York’s finest, who hadto arrest him. When taken to night court, Greenbaum explained in his defense that he was infuriated by Kuhn and that direct action was vital regardless of any riot that could have ensued. “Don’t you realize that innocent people might have been killed?” the judge admonished Greenbaum. “Don’t you realize that plenty of Jewish people might be killed with their persecution up there?” Greenbaum fired back.

We’ve seen the picture of a Trump supporter in Chicago defiantly throwing a stiff armed “Sieg heil” styled salute at anti-Trump protesters, as well as the video of another Trump supporter screaming “Go back to fuckin’ Auschwitz!” outside of a Kansas City event. What links them not with Hitler, but with Fritz Kuhn, is that the larger majority of Americans share the sensibilities of Dorothy Thompson, Isidore Greenbaum, and the countless others who ultimately cast Fritz Kuhn and the German-American Bund onto the ash-heap of history.

The “Resistance,” a Christian Group, Calls on 50 Cent to Retire Because He’s a “Satanic Piece Of Filth”