Editor’s note: When Republican propagandists fire up the gaslight, there is always a corporate sponsor behind it. It is common knowledge, for instance, that the Tea Party’s stubborn denial of global warming was stoked by PACs, right-wing disinformation cells and corruptible scientists willing to bend the data for a fat payoff from the Koch brothers. Koch Industries does not care to be held legally accountable for the destruction caused by fossil fuels, the source of Koch wealth, so perception management networks were deployed to deny reality. Authoritarian yahoos will swallow any lie, no matter how screwy, when the gaslight is on. Liberal pundits at MSNBC may scratch their heads at the latest insanity on the right, but all anyone needs to do is look for the money behind it. After pandemic struck, the far-right screamed insanely at the intrusions on their “freedoms” when asked kindly to wear a mask, and please don’t kill people by breathing directly on them. They took up arms and considered shooting public officials trying to stanch a plague.The gaslight was on. A great deal of liberal head-scratching ensued. But the explanation is always found in legal tender flowing from the corporate propaganda substrate — historically, the root of fascism — to the gaslighters, to ignorant, violent authoritarian brains … 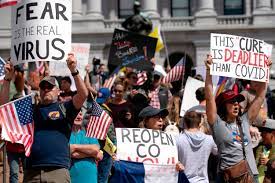 Protests with honking horns, anti-shutdown signs and angry Americans continued in Maryland, Texas and Wisconsin on April 18. (The Washington Post)

The ads on Facebook sounded populist and passionate: “The people are rising up against these insane shutdowns,” they said. “We’re fighting back to demand that our elected officials reopen America.”

But the posts, funded by an initiative called Convention of States, were not the product of a grass-roots uprising alone. Instead, they represented one salvo in a wide-ranging and well-financed conservative campaign to undermine restrictions that medical experts say are necessary to contain the coronavirus — but that protesters call overkill and whose economic fallout could damage President Trump’s political prospects.

A network of right-leaning individuals and groups, aided by nimble online outfits, has helped incubate the fervor erupting in state capitals across the country. The activism is often organic and the frustration deeply felt, but it is also being amplified, and in some cases coordinated, by longtime conservative activists, whose robust operations were initially set up with help from Republican megadonors.

The Convention of States project launched in 2015 with a high-dollar donation from the family foundation of Robert Mercer, a billionaire hedge fund manager and Republican patron. It boasts past support from two members of the Trump administration — Ken Cuccinelli, acting director of U.S. Citizenship and Immigration Services, and Ben Carson, secretary of housing and urban development.

It also trumpets a prior endorsement from Ron DeSantis, the Republican governor of Florida and a close Trump ally who ispursuing an aggressive planto reopen his state’s economy. A spokesman for Carson declined to comment. Cuccinelli and DeSantis did not respond to requests for comment.

The initiative, aimed at curtailing federal power, is now leveraging its sweeping national network and digital arsenal to help stitch together scattered demonstrations across the country, making opposition to stay-at-home orders appear more widespread than issuggested by polling.

“We’re providing a digital platform for people to plan and communicate about what they’re doing,” said Eric O’Keefe, board president of Citizens for Self-Governance, the parent organization of the Convention of States project.

A longtime associate of the conservative activist Koch family, O’Keefe helped manage David Koch’s 1980 bid for the White House when he served as the No.2 on the Libertarian ticket.

“To shut down our rural counties because of what’s going on in New York City, or in some sense Milwaukee, is draconian,” said O’Keefe, who lives in Wisconsin.

Polls suggest most Americans support local directives encouraging them to stay at home as covid-19, the disease caused by the new coronavirus, ravages the country,killing more than 44,000 people in the United Statesso far. Public health officials, including epidemiologists advising Trump’s White House, agree that sweeping restrictions represent the most effective mitigation strategy in the absence of a vaccine, which could be more than a year away.

Still, some activists insist that states should lift controls on commercial activity and public assembly, citing the effects of mass closures on businesses. They have been encouraged at times by Trump, whose attorney general, William P. Barr, said in aninterview with radio host Hugh Hewitt on Tuesday that the Justice Department would consider supporting lawsuits against restrictions that go “too far.”

Further afield, the protests have been encouraged by some of the president’s allies outside the White House, including Stephen Moore, onceconsidered for a top post at the Federal Reserve.

The swelling frustration on the right coincides with major policy changes in some states, especially those with Republican governors. Georgia, South Carolina and Tennessee have begun relaxing their restrictions in recent days after bowing to pressure and imposing far-reaching guidelines.

The protests are reminiscent in some ways of the tea party movement and the demonstrations against the Affordable Care Act that erupted in 2010, which also involved a mix of homegrown activism and shrewd behind-the-scenes funding.

For the Convention of States, public health is an unusual focus. It was founded to push for a convention that would add a ­balanced-budget amendment to the Constitution. That same anti-government impulse is now animating the group’s campaign againstcoronavirus precautions.

“Heavy-handed government orders that interfere with our most basic liberties will do more harm than good,” read its Facebook ads, which had been viewed as many as 36,000 times as of Tuesday evening.

Asking for a $5 donation “to support our fight,” the paid posts are part of an online blitz called “Open the States,” which also includes newly created websites, a data-collecting petition and an ominous video about the economic effects of the lockdown.

The group’s president, Mark Meckler, said his aim was to act as a “clearinghouse where these guys can all find each other” — a role he learned as co-founder of the Tea Party Patriots. FreedomWorks, a libertarian advocacy group also active in the tea party movement, is seeking to play a similar function, creating anonline calendarof protests.

“The major need back in 2009 was no different than it is today — some easy centralizing point to list events, to allow people to communicate with each other,” he said.

Meckler, who draws a salary of about $250,000 from the Convention of States parent group, a tax-exempt nonprofit organization, according to filings with the Internal Revenue Service, hailed the “spontaneous citizen groups self-organizing on the Internet and protesting what they perceive to be government overreach.”

So far, the protests against stay-at-home orders in states including Washington and Pennsylvania havecaptured headlines and drawn rebukes from some governorsand epidemiologists. Experts say a sudden, widespread reopening of the country is likely to worsen the outbreak, overwhelming hospitals and killing tens of thousands.

The protesters so far have not aimed their ire at Trump, though it is his administration’s experts whose guidelines underlie many of the states’ actions.

Trump’s public comments — including his recent tweets calling for supporters to “liberate” statesincluding Michigan, a coronavirus hot spot— have catalyzed some of the broader public reaction. Following those tweets, tens of thousands of people joined Facebook groups calling for protests in states including Pennsylvania and Ohio, where the efforts arecoordinated by a trio of brotherswho typically focus their efforts on fighting gun control.

In recent days, conservatives have set their sights on Wisconsin, where a few dozen protesters turned out at the Capitol to air their frustrations with Gov. Tony Evers, a Democrat, after he extended his state’s stay-at-home order until late May. Ahead of the demonstration, Moore, the Trump ally, revealed on a live stream that he was “working with a group” in the state with the goal of trying “to shut down the capital.

Moore, who served as a Trump campaign adviser in 2016, said he had located a big donor to aid in the effort, though he never elaborated. “I told him about this, and he said, ‘Steve, I promise to pay the bail and legal fees for anyone who gets arrested,’ ” Mooresaid in the video. He likened his quest to the civil rights movement, adding, “We need to be the Rosa Parks here and protest against these government injustices.”

Moore, who has also worked at the right-leaning Heritage Foundation, did not respond to a request for comment.

In Michigan, among those organizing “Operation Gridlock” was Meshawn Maddock, who sits on the Trump campaign’s advisory board and is a prominent figure in the “Women for Trump” coalition. Funds to promote the demonstrations on Facebook came from the Michigan Freedom Fund, which is headed by Greg McNeilly, a longtime adviser to the family of Education Secretary Betsy DeVos.

McNeilly said the money used to advance the anti-quarantine protests came from “grass-roots fundraising efforts” and had “nothing to do with any DeVos work.”

Many of the seemingly scattered, spontaneous outbursts of citizen activism reflect deeply interwoven networks of conservative and libertarian nonprofit organizations. One of the most vocal groups opposing the lockdown in Texas is an Austin-based conservative think tank called the Texas Public Policy Foundation, which also hails the demonstrations nationwide.

“Some Americans are angry,” its director wrote in an op-ed promoted on Facebook and placed in the local media, telling readers in Texas about the achievements of protesters in Michigan.

The board vice chairman of the Texas Public Policy Foundation, oil executive Tim Dunn, is also a founding board member of the group promoting the Convention of States initiative. And the foundation’s former president, Brooke Rollins, now works as an assistant to Trump in the Office of American Innovation.

Neither Dunn nor Rollins responded to requests for comment.

The John Hancock Committee for the States — the name used in IRS filings by the group behind the Convention of States — gave more than $100,000 to the Texas Public Policy Foundation in 2011.

The Convention of States project, meanwhile, has received backing from DonorsTrust, a tax-exempt financial conduit for right-wing causes that does not disclose its contributors. The same fund has helped bankroll the Idaho Freedom Foundation, which is encouraging protests of a stay-at-home order imposed by the state’s Republican governor, Brad Little.

“Disobey Idaho,” say its Facebook ads, which use an image of the “Join or Die” snake woodcut emblematic of the Revolutionary War and later adopted by the tea party movement.

In 2014, the year before it launched the Convention of States initiative, Citizens for Self-Governance received $500,000 from the Mercer Family Foundation, a donation Meckler said helped jump-start the campaign. Mercer declined to comment.

While groups and individual activists associated with the Koch brothers have boosted this far-flung network, Emily Seidel, the chief executive of the Koch-backed Americans for Prosperity advocacy group, sought to distance the organization from the protest activity, which she said was “not the best way” to “get people back to work.”

“Instead, we are working directly with policymakers, to bring business leaders and public health officials together to help develop standards to safely reopen the economy without jeopardizing public health,” Seidel said.

But others see linkages to groups pushing anti-quarantine uprisings.

“The involvement of the Koch institutional apparatus in groups supporting these protests is clear to me,” said Robert J. Brulle, a sociologist at Drexel University whose research has focused on climate lobbying. “The presence of allies on the board usually means that they are deeply engaged in the organization and most likely a funder.”

Brulle said the blowback against the coronavirus precautions carries echoes of efforts to deny climate change, both of which rely on hostility toward government action.

“These are extreme right-wing efforts to delegitimize government,” he said. “It’s an anti-government crusade.”