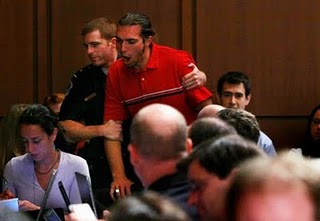 The current debate over health care has nothing to do with health care, any more than the TARP debate was about the economy. This is about one thing and one thing only: the GOP’s apoplexy over losing power, and their pathological desire to get it back. They despise Obama’s popularity, they detest his intelligence, his compassion, even the smile on his face. This is 21st-century Clinton hatred with a side order of racial resentment. Thinking there was ever any chance at bi-partisanship was as reality-challenged as picking up a rattlesnake thinking you could tame it as a house pet.

The GOP’s goal from the second the president took office was to bring him down. Their strategy: Operation Monkeyshit. Just like a monkey in the zoo will wildly fling his shit at tourists, the GOP started flinging their shit with the sole intention of diminishing the president’s popularity, tarnishing his image, and hurting his brand, all to lay the groundwork for the 2010 midterms and 2012 presidential elections. Tea parties. “Mortgaging our children’s future.” “The TARP didn’t work.” “Death panels.” “Killing grandma.” Birthers. “He’s going to take your guns and house terrorists in your neighborhood.” “He’s weakening the country.” “He’s going to give Bin Laden the keys to your city where he will take your job and sleep with your daughter.”

Now it’s the professional tailgaters in town halls holding Hitler signs, screaming about Fascism and Socialism — as if they could either define those ideas, or spell them. It’s Rove 101. Take your opponent’s biggest strength and turn it into a weakness. John Kerry the veteran fabricated his injuries. Obama is Hitler.

Of course it’s insane, but getting out the hicks provides the sound bites for the party’s media flacks and congressional representatives to hit the talk shows and smugly fob off these contrivances as spontaneous expressions of national outrage, as opposed to insurance- and drug company-created street theater. As if a few hundred illiterate screamers in a nation of several hundred million constituted a popular uprising. People with legitimate concerns don’t reach for Hitler signs and mob chants as if the increased volume gave them some sort of collective higher intelligence. These are not outraged citizens. These are the great unwashed with too much free time on their hands, and access to their children’s crayons. 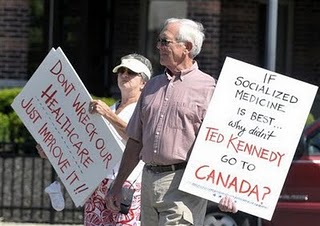 The GOP has no platform. They don’t care about the economy, unemployment, jobs, the deficit, the wars, or their cost either in dollars or human life. Just witness their current leader — Mr. Potato Head look-alike, Michael Steele — and his reaction to a woman in a wheelchair talking about her medical horror story. His response was pure Republicanism: disdain in the face of human suffering.

All these people care about is regaining power by diminishing the president’s image, and defeating his every initiative. …

Previous Article
Eleven More Companies Ditch Glenn Beck
Next Article
“[I] Pray For Barack Obama To Die And Go To Hell”: The Story the Media Missed

“[I] Pray For Barack Obama To Die And Go To Hell”: The Story the Media Missed
Sep 04