The Day Montreal Cheered the Nazis

JOHN KALBFLEISCH
The Gazette
Wednesday, May 13, 1936

"Out of a grey morning mist, the Reich cruiser Emden - first German warship to dock here in 22 years - came into the port of Montreal yesterday ... " 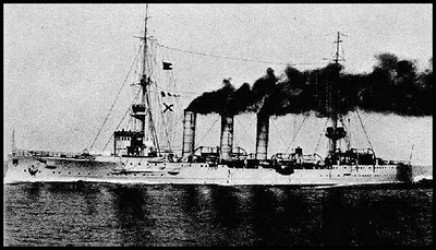 It was a stirring sight, though the emotions stirred up by the arrival of the German cruiser Emden were by no means the same for everyone.

The ship, with its eight 152-mm guns, was the first German warship built after the First World War, and for Montreal's Germans it was a proud day. The community was small, numbering perhaps 5,000 people, but many were German nationals rather than Canadian-born and their ties to the Fatherland were especially strong. As The Gazette noted, the Emden tied up "to the ringing cheers of German-Canadian patriots who lined the pier."

It was a goodwill visit, and the goodwill was laid on with a trowel. Local navy reservists joined Emden crewmembers to heave on the head lines that brought her to her berth. Airplanes dipped their wings overhead. After the lines were secured, the Emden fired an 11-gun salute and her skipper, Captain Johannes Bachmann, went ashore to make an official call on city hall.

Over the next five days, it was more of the same. Thousands of ordinary Montrealers lined up to visit the ship, and members of the United Services Club as well as some aldermen came aboard as special guests. The German consul-general, Ludwig Kempff, organized a reception for the Emden's officers at the Windsor Hotel that was attended by le tout Montréal; Chief Justice R.A.E. Greenshields, Air Vice Marshal Billy Bishop, Anglicans Bishop John Cragg Farthing and assorted Drummonds, Molsons and Allans were prominent on the guest list.

The United Services Club repaid the Emden's hospitality by inviting Capt. Bachmann and several officers to a dinner. Younger Montrealers were among the guests at a reception at the Ritz Carlton organized by the German Olympic Committee (the 11th Olympiad would be held in Berlin that summer). A soccer team from the warship played exhibition games against several local sides.

Somehow, local Mohawks were persuaded to initiate Capt. Bachmann into their tribe as Chief Big River. A Japanese named Yamahoto Iko boarded the Emden to present its officers with three bouquets of roses. He then promised "to give them all apples; maybe they will like apples," though whether he ever did so is not recorded.

Yet there was a darker side to the visit, too. Among those greeting the Emden's arrival were some 200 men and women with banners reading "We demand release of all political prisoners in Germany" and "The Emden is a symbol of persecution." Rather more than 200 policemen descended on them, and 10 people were detained.

"Orders have been issued to arrest all suspicious characters found in the vicinity of the cruiser," we reported. "Receptions tendered to the officers of the ship also will be guarded by police."

The very day the Emden arrived, a Jew named Ernest Marcuse appeared in a Montreal court on fraud charges. He tearfully told the judge he would commit suicide rather than allow himself to be deported to his native Germany should he be found guilty. Prosecutor Robert Bourassa countered that Germany's animus toward Jews was no concern of Canada.

In the House of Commons, Samuel Jacobs, Liberal MP for Cartier and also a Jew, asked about the propriety of allowing the Emden to visit. Prime Minister Mackenzie King replied that "the visit ... has no political significance."

That was a stretch, of course. The visit was an attempt to enhance the prestige of the Nazi regime.

On Sunday, the Emden's last full day in Montreal, Capt. Bachman told 1,000 cheering people that "Hitler means Germany and Germany Hitler." Consul-General Kempff assured everyone that the number of inmates in Germany's concentration camps had been reduced to 5,000, though even if this total was accurate it still represented an appalling number of people locked up for political reasons.

The Emden left the following day, mission apparently accomplished. As The Gazette said in an especially vapid editorial, "Everybody loves a sailor."

In September 1939, several days after the inevitable beginning of the Second World War, the Emden was damaged in a British air raid. After repairs, she was used for a time as a minelayer in the North Sea but spent most of the war as a training ship in the Baltic. In April 1945, she was damaged in another air raid, this time severely, and once the war was over was finally scrapped.