“The Cyber-Attack was Based in America” 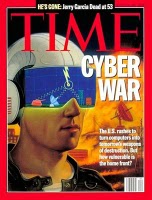 This development was inevitable, of course: " ... Global Digital Broadcast ... had 'discounted it as coming from a North Korean Government site,' suggesting the source of the attack was based in America. ... "

The master computer which controlled last week’s massive cyber attack on websites in the US and South Korea is in Britain, Asian computer security investigators claim.

The attack, which paralysed the websites of South Korean and United States government agencies, banks and businesses over the course of a week, was first blamed on communist North Korea. But having traced the attack back via proxy computers used in the attack, a security company in Vietnam has identified a server belonging to Global Digital Broadcast, a Brighton-based internet television company as the source of the attacks.

The analysis, by a Vietnamese company, Bach Khoa Internetwork Security (BKIS), was carried out at the request of the South Korean government. Yesterday, South Korea emphasised that it was not clear whether Global Digital Broadcast was the origin of the attacks or whether it was also being manipulated by a master computer.

"The [Brighton] server appears to have controlled compromised handler servers,” Park Cheol Soon of South Korea’s communications commission. told Agence France Presse. “However, it needs more investigation to confirm whether this server was the final attacker server or not.”

Global Digital Broadcast wrote on its website that it was aware of the issue and had “treated it with utmost severity” but had “discounted it as coming from a North Korean Government site” suggesting the source of the attack was based in America.

“We have spoken to the company involved. But this this is not our investigation, we’re just dealing with the company on the UK side.” ...