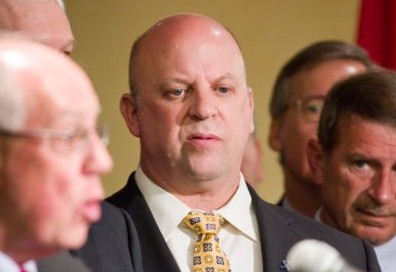 On the heels of a sex scandal involving a female patient, another woman has acknowledged having a sexual relationship with physician and U.S. Rep. Scott DesJarlais while she was under his medical care.

The second woman described DesJarlais as "the nicest guy" and said he cooked dinner for her at their first get-together in 2000.

But she also said they smoked marijuana during their relationship and remembered DesJarlais prescribing her pain medication on dates at his home.

"His biggest thing that's completely unethical is him just picking up women while he's a doctor," the woman said in an interview last week. "I mean, seriously, that's his big no-no. ... He's just a hound."

The woman's remarks about marijuana use could not be independently verified.

DesJarlais is a Republican seeking reelection in the 4th District. In a prepared statement Saturday, his campaign did not dispute any specific allegations by the woman, instead condemning "personal smear campaigns that hurt families" and "have no place in politics."

"This is not a credible story, and it seems that the Chattanooga Times Free Press has no interest in informing their readers about real issues facing Tennesseans but would rather focus solely on a 14-year-old divorce," campaign manager Brandon Lewis said.

The woman lives in a 4th District county close to the Chattanooga area. The Times Free Press granted her anonymity but checked her driver's license and verified her identity in DesJarlais' divorce papers -- her name is included in his ex-wife's extensive list of "potential witnesses." Court records and a family friend confirm that the woman and DesJarlais had an affair.

The newspaper's exclusive adds a second voice to a storyline that has complicated DesJarlais' bid for reelection against Democrat Eric Stewart. The ex-girlfriend's recollections come nine days before the general election and three weeks after the Huffington Post reported that the anti-abortion congressman and Jasper physician had an affair with a patient and pressured her to get an abortion.

That bombshell put what seemed like a sure Republican seat into contention. A liberal "super PAC" poured $100,000 into an attack ad against DesJarlais, and the Democratic Congressional Campaign Committee vowed to help Stewart in what quickly became one of 55 "red to blue" districts Democrats think they can win.

On Saturday, Stewart campaign manager Kevin Teets said the woman's account would continue to bolster his boss, who for the first time eclipsed DesJarlais in the most recent fundraising period.

"It's clear from this further revelation that Scott DesJarlais has many issues. We hope he's able to get the help he so clearly needs," Teets said. "However, the people of the 4th District deserve a congressman like Eric, ready to roll up his sleeves and get to work tackling the many issues facing our country." timesfreepress.com

Tennessee medical ethics rules bar sexual relationships between doctors and patients. The group Citizens for Responsibility and Ethics in Washington has filed a formal complaint with the Tennessee Board of Medical Examiners.

Earlier this month, the Huffington Post also revealed the relationship between Republican Rep. Scott DesJarlais, the anti-abortion Tennessee congressman, and another patient, printing details from a transcript of a phone call from 2000 in which he pressured the woman to get an abortion.

In court filings, DesJarlais acknowledged having four extramarital affairs. He has acknowledged the accuracy of a transcript of a recorded conversation he had with an unnamed patient in which he pressed her to get an abortion. timesfreepress.com

This isn’t the first time DesJarlais’s personal life has become an issue. His 2010 campaign had to contend with attacks over documents pertaining to his divorce that alleged violent behavior.