In 2011, the Tea Party's Christopher Mitchum (R-Santa Barbara County) ran for a Congressional seat. As I predicted at the time, his bid was doomed to failure. He and a number of right-wing followers left irate comments castigating me for various journalistic and personal imperfections. They predicted that Mitchum would trump multi-term, liberal Democratic Congresswoman Lois Capps hands down in the election. But Mitchum not only lost -- despite a clutch of ardent Birchite supporters and a platform of ringing, jingoistic bromides -- he was forced out of the running in the tightly-contested primary. Mutchum recently told a reporter for the Santa Barbara News-Press that he intends to run again. And once again, I predict that Mitchum will lose. My 2011 profile of Mitchem is reprinted here verbatim: 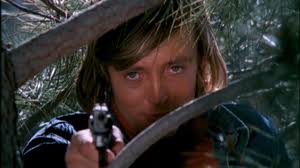 In Hollywood, his father Robert Mitchum is remembered as one of the most gifted actors of film noir and the golden age of film. But Christopher “Chris” Mitchum’s own acting career was star-crossed. His brief rise to the celebrity stratum began brightly enough in the 1960s, but entered a long phase of decline in the ’70s straight to the cinematic gutter.

As interviewer John Nada puts it, “Mitchem could be described as a severe case of bad luck,” who “explored the nether regions of B, C, and F cinema.” Mitchum’s first professional acting role was a “dead man.”

While studying English literature at the University of Arizona, he paid his tuition by working as an extra. Sam Maners, production manager of the TV show Dundee and the Culhane, offered him a part for a day. “I was very excited – until I read the script,” Mitchum recalls. “I died before the opening credits, off screen. I played a dead man.”

Before long, Mitchum had a part on the Danny Thomas Hour, a series of 60-minute dramas. He was even given a role in Rio Lobo, starring John Wayne, directed by the legendary Howard Hawks, as the studio era entered its terminal phase of decline. Photoplay honored him with the Gold Medal Award for Best New Actor. He won a role in Big Jake, another John Wayne film.

But at this point in his career, stars crossed. He was unable to find work in Hollywood, he says, for political reasons. A casting director explained the problem to him: “You starred with John Wayne.” The Duke, of course, was an outspoken hawk during the Vietnam War. Much of liberal Hollywood was repulsed by Wayne’s pro-war rhetoric. The Duke went on to make pictures, but many of those who worked with him didn’t, Mitchum says.

“I was blackballed in some circles.” This is the point, he says, where his acting prospects dimmed. He was offered a part in a Spanish film. “Of course, once you become a ‘foreign star, you’re regarded as a ‘B’ actor and fall out of the loop.”

He also appeared in Commando Mengele, alternately titled, Angel of Death, directed by Andrea Bianchi. By the 90s, however, the offers stopped coming. He turned to screenwriting. Nine of his scripts were turned into movies. Then it was politics. Chris Mitchum was the GOP nominee in the 1998 general election for the 35th district (Santa Barbara County) of the California State Assembly. He lost to Democrat Hannah-Beth Jackson. 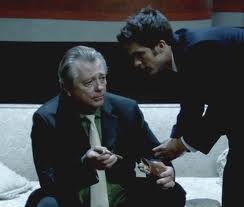 By 2011, he was a charter Tea Party member, ran in a Republican straw poll and won. “Since the Democrats shoved Obamacare down our throats,” he told the Santa Barbara News-Press in November 2011, “ this country’s been in dire straits. I’m in this race to do all that I can to get this country back on track.” He intends to run against Lois Capps, a popular Democratic Congresswoman who Mitchum dismisses as a “socialist.” Far-right Mitchum vs. progressive Capps will be “bloody,” he says. Doubtless. Crossroads GPS, a right-wing 501(c)(4) group, has already spent some $1.4 million on television ads castigating ten Democratic representatives. Capps is the only Californian targeted by the conservative organization. But Mitchum has proclaimed that his true opposition is not Capps, but President Obama.

The star of Angel of Death views Obamacare as one of the most pressing issues of our time. “The United States has the best medicine in the world,” he told the Santa Barbara News-Press, “adding that the public shares some of the blame in higher costs for expecting too much and leaving health-care professionals vulnerable to massive malpractice awards.” “We need radical tort reform,” he claims. Cookie-cutter Tea Party rhetoric with a corporate bias. Tune in Tea Party candidates around the country, and it’s the same “ideals” cast in the same dead, insincere, partisan Republican tones. On Herman Cain: “We could do a lot worse.” Mitchum’s take on Obama’s first term: “Oh my gosh, we did a lot worse.”  Mitchum’s right-wing rhetoric is supposed to ring like Ronald Reagan’s “Morning in America” promo, but plops like a wet tea bag. A recent campaign mailer to residents of Santa Barbara County takes aim at the Marxist (?) left with echoes of Mitchum’s old Hollywood mentor, The Duke:

Dear Friends: In 2008, our country suffered a bloodless coup. Socialists took control of two of the three branches of government. It is ironic that the very system they wish to tear down is what allowed them to gain power. Fortunately, our Founding Fathers built into the Constitution the means for revolt. It’s called an election and with that process, using ballots instead of bullets, we can regain control of our government. … God Bless America!

And God bless Chris Mitchum, a failed actor on his way to becoming a failed politician. Lois Capps has dropped a number of noisy, jingoistic GOP opponents. Does anyone doubt that Mitchum is only the next in line?

Mind Control Without Drugs: How Insurers and Major Corporations Duped U.S. Consumers Into Abandoning State Safety Laws That Protected Them