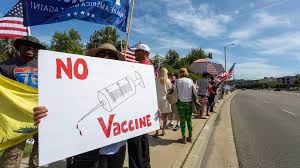 There have been many contributing factors to the disastrous scope and scale of the COVID-19 pandemic in the United States over the past year, but right now, tragically, misinformation and ignorance top the list.

As NC Policy Watch investigative journalist Lynn Bonner reported last week, despite the rapid spread of the deadly and highly contagious Delta variant of the coronavirus, millions of North Carolinians are still steering clear of vaccination because they’ve embraced or fallen prey to the lie that the vaccines are dangerous, or because they’re not paying attention and simply don’t understand how beneficial and critically important it is for everyone to get a shot.

Not that long ago, such a level of aggressive, head-in-the-sand ignorance seemed unimaginable. Last fall, as the COVID-19 death toll continued to soar, the clamoring for a vaccine spanned the political spectrum.

Indeed, it was Republicans who were heaping praise of then-President Trump for what they claimed was his vital role in developing a COVID-19 vaccine that would at last help break the deadly pandemic.

Early this year, as Democrats assumed control of the federal government, it was Republicans across the country who were complaining mightily about what they said was an inadequate and insufficiently speedy effort to distribute vaccines.

In April of this year, it was Republican political leaders in North Carolina who appeared in public service ads touting the vital importance of universal vaccination. “We need to do all we can to avoid the spread of this virus. It’s such a small thing that folks can do to really help avoid the spread of this disease,” said House Speaker Tim Moore. “I wanted to make sure I had done everything to protect myself, but also to protect the people I came in contact with,” said Senate President Pro Tem Phil Berger.

And as recently as last month, it was Trump himself who told a large, in-person Greenville audience that the room in which they were gathered “would be empty right now” were it not for the vaccines.

Today, however, as the dog days of summer take hold in earnest and another dark and deadly turn in the pandemic grips the nation, it is Republicans and their supporters and allies on the political right who are fomenting vaccine hostility by spreading myths and lies.

And make no mistake, the lies are having an effect. As the Kaiser Family Foundation reported earlier this month:

One of the main factors driving differences in COVID-19 vaccination rates across the country is partisanship…. Republicans are much more likely to say that they definitely do not want to get vaccinated.”

It’s hard to overstate what a deadly disaster this is. As WRAL.com reported on Monday, the number and severity of new coronavirus cases in North Carolina is spiking once again, with state officials now having “reported four straight days of more than 1,000 new cases, topped by Saturday’s 1,163, which was the highest single-day figure since May 20….” The national pattern is similar.

If such misinformation and willful ignorance had been the norm during the 20th century, humans would have never eradicated smallpox or polio.

Of course, it would be possible for prominent voices in the Republican Party – Thom Tillis, Richard Burr come to mind – to loudly debunk utterly inane conspiracy theories like Cawthorn’s. If he weren’t such a disturbed narcissist who cares vastly more about his own personal glorification than the nation’s well-being, Donald Trump would stand next to Mitch McConnell and Kevin McCarthy tomorrow and give an address endorsing vaccination. He could probably call it the “Trump vaccine” and save tens of thousands of lives.

But that, alas, would be bad for business. And as with so many other loony and hateful beliefs that have become part and parcel of Trumpism (white supremacy, the QAnon insanity, Islamophobia and anti-Asian hatred), vaccine hostility is a wave of irrational bile that percolated up from the grassroots. Trump and his pals didn’t invent it, but they are happy to surf it and loathe to tamp down.

The bottom line: COVID-19 vaccines are a true miracle of modern science and universal vaccination is essential to the well-being of our society. What’s more, experience shows that it’s possible to overcome vaccine hesitancy through education. Tragically, however, as in so many other areas – the climate crisis, healthcare access, gun violence – the political right would rather deny such truths and sacrifice thousands of lives than alienate its conspiracy-obsessed and ever-more-irrational political base.