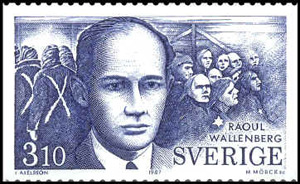 NEW evidence from Russian archives suggests Swedish diplomat Raoul Wallenberg, credited with rescuing tens of thousands of Hungarian Jews in the Holocaust, was alive after Soviets reported his death in a Moscow prison.

Wallenberg was arrested in Budapest in January 1945 by the Red Army. The Soviets later said he was executed on 17 July, 1947, but never produced a reliable death certificate, or his remains.

Now, Russian security service archives show a man identified only as Prisoner No7, who was interrogated six days after the diplomat’s reported death, was “with great likelihood” Wallenberg.

The security services reported the find to Susanne Berger and Vadim Birstein, two members of a United States research team which conducted a ten-year investigation into his disappearance.

As Sweden’s envoy from July 1944, Wallenberg prevented the deportation of 20,000 Jews destined for Nazi concentration camps. He also dissuaded German officers from a plan to obliterate Budapest’s Jewish ghetto, averting a massacre of 70,000. He was arrested the day after the Red Army seized the city. The Russians never explained why.

“This has to be investigated again. If he was still alive six days later, then maybe he was alive for a longer period of time,” he said.