” … The tactics and underlying agenda of this organisation smack of the discredited eugenics movements of the early 20th century. … “ 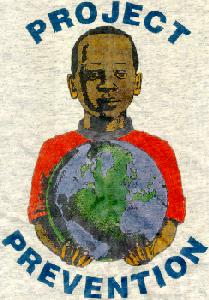 A GROUP offering drug users £200 to get sterilised should be banned in Scotland, campaigners said yesterday. The calls for Project Prevention to be outlawed came after we revealed how mum Deborah Wilson – who is not a drug user – was stopped in the street by their volunteers.

Deborah, 33, told last week how she complained to police after being approached while with son Jay, nine, outside Possilpark health centre, Glasgow.

Project Prevention claim their aim is to stop “substance-exposed” births.

Critics of the US group have compared their approach to the Nazis’ racially-based sterilisation policies.

Chairwoman of Scottish Network for Families Affected by Drugs, Eleanor Robertson, said: “I just cannot agree with this scheme at all – it is horrifying.

“People often recover from addictions so semi-permanent contraception would be bad enough, let alone anything permanent.

“Where do they draw the line – will there be a move to sterilise other sections of society? “Project Prevention should not be allowed to operate here.

“If a person has addiction problems, they might not be thinking rationally when they take this radical step.”

Director of the Scottish Drugs Forum, David Liddell, said: “All women, irrespective of whether they’re drug users or not, should be offered family planning advice to avoid unwanted pregnancies.

“But the tactics and underlying agenda of this organisation smack of the discredited eugenics movements of the early 20th century.”

However, the founder of Project Prevention yesterday insisted her visit to Scotland had been a success.

Speaking from her home in North Carolina, Barbara Harris said: “I am very angry and shocked this woman has reacted this way to us. We approached her just to explain who we were and what we were doing in the area. We said we were bringing our offer to the UK. We tried to give the woman one of our cards but she just blew up. She cussed us out and I have not heard foul language like it.”

Harris used social networking sites to hail her visit earlier this month a success. On Twitter and Facebook she said: “Met an addict in Glasgow today seven months pregnant with her fifth baby. She was so high she could barely talk to us. She cried telling us they were about to adopt out her four-year-old daughter. I hope after she delivers her baby that she’ll get on birth control so they cannot take any more children from her.”

Police confirmed an investigation was continuing.