Sam Greenlee, a novelist and poet best known for a low-budget 1973 movie made from his novel “The Spook Who Sat by the Door,” which envisioned a black power revolution led by a militant black ex-C.I.A. agent — it was pulled from theaters after a brief box office success — died on May 19 in Chicago. He was 83.

The cause was heart failure, said Pemon Rami, a family spokesman.

The film, with the same title as the novel, achieved cult status as one of the few to portray the black power movement of the 1960s and ’70s from a militant’s point of view. Mr. Greenlee helped write the script, which, like the book, drew on his experiences working abroad for the State Department.

In the story, Mr. Greenlee’s protagonist, Dan Freeman, endures a brief, demeaning career as the first African-American C.I.A. officer, a token position, just so he can learn the art of fomenting revolution from foreign rebellions and then bring the revolution home to Chicago.

The portrayal was criticized by some as a revolutionary’s handbook, complete with detailed accounts of making Molotov cocktails, robbing banks and taking firearms from a National Guard armory. Mr. Greenlee said his purpose had never been to advocate those actions, but rather to explore what he considered a fantasy of many young black men at the time: turning the tables on the white establishment by using its power against it.

“The Spook Who Sat by the Door,” directed by Ivan Dixon and starring Lawrence Cook — with a score by Herbie Hancock, an old Chicago friend of Mr. Greenlee — was selected in 2012 for inclusion in the National Film Registry, a catalog of American movies of “enduring cultural or historical significance.” In a citation accompanying the announcement, the Library said that the film reflected a dimension of “who we are as a nation.”

After a successful three-week run in the fall of 1973 in Chicago and several other cities, the film disappeared from movie theaters, presumably because of its subject matter. The distributor, United Artists, never offered an explanation. Mr. Greenlee said that several theater owners had told him they were contacted by men who identified themselves as F.B.I. agents and ordered them to stop showing the film. The F.B.I. never addressed that accusation. 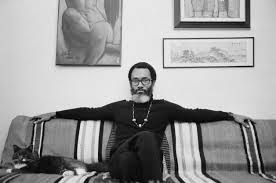 After 1973, the film was seen occasionally in art houses and university auditoriums. A remastered version was released on DVD in 2004.

Before beginning his writing career, Mr. Greenlee was one of the first African-Americans to serve in the United States Information Agency, a branch of the State Department that promotes American interests abroad. (Unlike his fictional character, he told interviewers, he had never been a C.I.A. operative.)

He was a U.S.I.A. officer from 1957 to 1965, working at embassies in Iran, Iraq, Indonesia, Pakistan and Greece — all places teetering on the edge of political disorder — dispensing information to the local news media. The material was usually favorable to the American-backed autocracy in power and critical of its opponents, who, in those cold war years, were often viewed by American officials as Communist-backed or -inspired.

“I was a propagandist; I sold the United States like toothpaste,” he said in a 2011 interview with the online music journal Wax Poetics. “Propaganda for the Iraqis and the Iranians — to support the king in Iraq and the shah in Iran.”

After eight years in that job, he said, he came to consider himself a “token Negro,” hired as a prop — literally to sit by the door, to show foreigners that progress was being made in America toward racial equality. Hence the title of his book, which he wrote in 1966 while living in Greece, after leaving the information agency. It was published in 1969.

Mr. Greenlee wrote one other novel, “Baghdad Blues” (1976), which also drew on his government work. He published several books of poetry and a dozen plays.

In “The Spook Who Sat by the Door,” Freeman, the protagonist, leaves the C.I.A. after a half-dozen years to share what he has learned about military assassination and counterinsurgency with a Chicago street gang, the Cobras, which he hopes will become the vanguard of an armed black power revolution.

Mr. Greenlee remained an unrepentant radical, convinced until the end of his life that his film had been suppressed by a government agency.

He was critical of mainstream black political leaders, accusing them of becoming part of the white establishment instead of creating an establishment of their own, and he was dismissive of many black filmmakers, saying they were too concerned about appealing to white audiences.

He saw the racial divide in the United States as permanent. “If you’re going to be outsiders, man, take advantage of being outsiders,” he said in a recent interview.

He is survived by a daughter, Natiki Montano; his longtime companion, Maxine McCrey; and a granddaughter.

After living abroad for more than a decade, Mr. Greenlee returned to Chicago in the 1980s. He taught writing, hosted a radio show on the all-talk station WVON-AM and produced several of his plays there.

“But if I never made another film,” Mr. Greenlee added defiantly in an interview, “look at the film I made.”