" ... Christina Taylor Greene, the little 9-year-old girl who was killed in the shooting, was born on September 11, 2001, and had just been elected to the student council at her school. ... " - getreligion.org

Arizona Democratic Rep. Gabrielle Giffords was shot on Saturday morning while hosting an event outside a Tucson grocery store.

A hospital spokesperson confirmed that Giffords had been shot in the head and was in critical condition Saturday afternoon. Eight others were brought to the hospital with Giffords, including seven adults and one child, all of whom were in either critical or serious condition. The hospital has scheduled a briefing for 1:30 p.m. local time on Saturday.

National Public Radio reported earlier Saturday that Giffords, who in November narrowly won reelection to a third term, was hosting her first "Congress on Your Corner" event when a gunman ran up and began shooting.

According to a local news report, Giffords was shot in the head at point-blank range.

Last March, Giffords was one of 10 House Democrats who were the subject of harassment over their support for the national health care overhaul. At the time, the front door of Giffords' Tucson office had been shattered in an early morning incident.

A Former Congressional Aide on The Shooting of Rep. Gabrielle Giffords and the Consequences of the Politics of Hate

Perhaps it is because I can still remember watching Bobby Kennedy dying in the kitchen of the Ambassador Hotel, reading about the assassination of Martin Luther King, Jr., watching the replays of Hinckley gunning down Reagan, and, of course, our own City's legacy with George Moscone and Harvey Milk, but I have always had a rather vigilante attitude towards attacks on public officials, real and perceived. Just minutes ago, the shooting spree that targeted Rep. Gabrielle Giffords just brought those horrible memories to the fore yet again.

When I worked for Rep. Pelosi for seven years -- before she was in leadership, before she received mandatory police protection -- we would, as Rep. Giffords did, have public meetings. Rather than use Twitter or Facebook, we would send out postcards to every household in San Francisco, inviting them to various locations around the City. It is part of every Congressperson's portfolio -- going out there, in a no-holds barred discussion on the important issues of the day. In the beginning, these meetings were held in a coffee-klatch type atmosphere, where we would sit and talk, finish up, shake hands, pose for photographs, and move on to our next location.

But as time wore on, as we moved into war in the Persian Gulf, the tenor of meetings began to change. Genuinely angry people would show up, the tenor of letters and phone calls (no email back then) would become increasingly profane and threatening. I began assuming a more defensive posture at these meeting and at all public events with the Congresswoman. I ensured that members of the SFPD would be visible, but not too intrusive, at all our public meetings. I shifted my position from being seated amongst the attendees to standing or sitting behind or to the side of her, the better to scan the audience. There was more than one occasion that I would physically interpose myself between her and others, or lightly but firmly direct her away from people whose demeanor I wanted her to avoid. For the last five years I worked for her -- from 1991 to 1996 -- I made a mental decision to add "bodyguard" to my list of duties as her national profile rose and, accordingly, the number of lunatics who contacted our office increased.

The proliferation of platforms for hate on cable, radio, where the anonymity of the internet allows filth-spewing idiots (many of whom comment on this blog) to rage, has changed the political climate of this country. Now, as compared to when I started twenty years ago, it is ok to act like a common street thug on the media. Extremists aren't censored -- they get their own cable show, they create their own blogs and internet sites, the more outrageous the better to find adherents and disciples that Jim Jones and David Koresh could have only dreamed of. ...

I'm not saying that putting a bullseye on Arizona Democrat Rep. Gabrielle Giffords' congressional race - as Sarah Palin did - was an explicit or intentional invitation to violence. Nor am I saying that the "Get on Target for Victory" events held by the guy Giffords beat - "Help remove Gabrielle Giffords from office Shoot a fully automatic M16 with Jesse Kelly" - was the reason her assassin went after her. This tragedy is still unfolding, and the questions of motive and incitement will be argued about for a long time to come.

But I am saying that the "lock and load"/"take up your arms" rhetoric of American politics isn't just an overheated metaphor. For years, the language of sports has dominated political journalism, and discourse about hardball and the horserace and the rest of the macho athletic lexicon has been a factor in the trivialization of our public sphere. This has helped dumb down democracy, making a serious national discussion about anything important too wonky for words.

The "second amendment solution," though, does something worse than make politics a branch of entertainment. It makes it a blood sport. I know politics ain't beanbag. ...

Visit msnbc.com for breaking news, world news, and news about the economy

... Federal officials told NBC News that U.S. District Court Judge John M. Roll was among those who was shot and had died. He was the chief judge in Arizona, appointed in 1991 by the first President Bush. He became chief judge in 2006.

Congressional officials said an aide to Giffords also was killed, and unknown number of others were injured, including staffers to the lawmaker.

President Barack Obama called the shooting "an unspeakable tragedy" and that such "a senseless and terrible act of violence has no place in a free society."

U.S. Capitol police say the 22-year-old shooter was in custody as one official said he carried out the attack with a pistol. The officials who described the events did so on condition of anonymity, saying they were not permitted to comment publicly. ...

A surgeon is "very optimistic" about Rep. Giffords.  He adds that she was shot in the head "through and through."

"We cannot tell what kind of recovery but I'm about as optimistic as it can get in this situation." He also says that there are 10 patients from the shooting, one has died, five are in critical condition. The dead patient was a child -- the only one that came to the hospital.

Jared Laughner, the man who shot Congresswoman Gabrielle Giffords (D-Ariz.), was described by eyewitnesses as a young white man who looked like a "fringe character."

Laughner shot Giffords and 12 others at a public event at a Safeway grocery store in Tucscon. He reportedly shot the congresswoman "point blank" in the head and may have come from inside the store. After shooting Giffords, he allegedly fired 20-30 rounds and hit "a number of people," including a child. He attempted to flee after running out of ammunition and was tackled by one of Giffords' staffers.

He was arrested upon arrival of the sheriff's department.

Tucson Citizen: "Police arrest man near Thornydale and Magee Roads who is suspected of being connected to the shooting of Giffords and others. A third man is being sought. ... "

... A hospital spokesperson confirmed to CNN that Giffords was shot in the head. Her father, when asked by reporters if she had any enemies, said "Yeah. The whole tea party."  ... 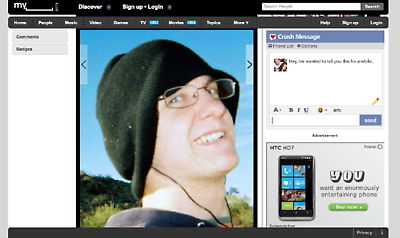 ON MIND CONTROL:  "The government is implying mind control and brainwash on the public by controlling grammar. ... What's government if words don't have meaning?"

EFF: The NSA is Making Us All Less Safe