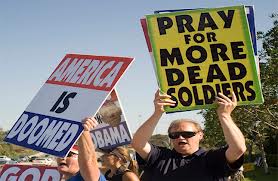 Kathleen Taylor, a neurologist at Oxford University, said that  recent developments suggest that we will soon be able to treat religious  fundamentalism and other forms of ideological beliefs  potentially harmful to  society as a form of mental illness.
She made the assertion during a talk at the Hay Literary Festival in Wales on Wednesday. She said that  radicalizing ideologies may soon be viewed not as being of personal choice or  free will but as a category of mental disorder. She said new developments in  neuroscience could make it possible to consider extremists as people with mental  illness rather than criminals.She told The Times of London: “One of the surprises may be to see  people with certain beliefs as people who can be treated. Someone who has for  example become radicalized to a cult ideology — we might stop seeing that as a  personal choice that they have chosen as a result of pure free will and may  start treating it as some kind of mental disturbance.”

Taylor admits that the scope of what  could end up being  labelled “fundamentalist” is expansive. She continued: “I am  not just talking about the obvious candidates like radical Islam or some of the  more extreme cults. I am talking about things like the belief that it is OK to  beat your children. These beliefs are very harmful but are not normally  categorized as mental illness. In many ways that could be a very positive thing  because there are no doubt beliefs in our society that do a heck of a lot of  damage, that really do a lot of harm.”

The Huffington Post reports Taylor warns about the  moral-ethical complications that could arise.

In her book “The Brain Supremacy,” she  writes of the need “to be careful when it comes to developing technologies which  can slip through the skull to directly manipulate the brain. They cannot be  morally neutral, these world-shaping tools; when the aspect of the world in  question is a human being, morality inevitably rears its hydra heads.  Technologies which profoundly change our relationship with the world around us  cannot simply be tools, to be used for good or evil, if they alter our basic  perception of what good and evil are.”

The moral-ethical dimension arises from  the predictable tendency when acting on the problem, armed with a new  technology, to apply to the label “fundamentalist” only to our ideological  opponents, while failing to perceive the “fundamentalism” in ourselves.

From the perspective of the Western  mind, for instance, the tendency to equate “fundamentalism” exclusively with  radical Islamism is too tempting. But how much less “fundamentalist” than an  Osama bin Laden is a nation of capitalist ideologues carpet bombing civilian  urban areas in Laos, Cambodia and North Korea?

The jihadist’s obsession with defending  his Islamic ideological world view which leads him to perpetrate and justify  such barbaric acts as the Woolwich murder are of the same nature as the  evangelical obsession with spreading the pseudo-religious ideology of capitalism  which led to such horrendous crimes as the murder of hundreds of thousands of civilians in four years of carpet  bombing operations by the Nixon administration caught in a vice grip of  anti-communist paranoia.

The power to control the mind will tend  too readily to be used as weapon against our jihadist enemies while justifying  the equally irrational and murderously harmful actions we term innocously  “foreign policy.”

Some analysts are thus convinced that neuroscientists will be  adopting a parochial and therefore ultimately counterproductive approach if they  insist on  identifying particular belief systems characteristic of ideological  opponents as the primary subject for therapeutic manipulation.

What we perceive from our perspective  as our legitimate self-defensive reaction to the psychosis of the enemy, is from  the perspective of the same enemy our equally malignant psychotic  self-obsession.

The Huffington Post reports that this is not the first time Taylor has written a book about extremism and fundamentalism. In 2006, she wrote  a book about mind control titled “Brainwashing: The Science of Thought Control,”  in which she examined the techniques that cultic groups use to influence  victims.

She said: “We all change our beliefs of  course. We all persuade each other to do things; we all watch advertising; we  all get educated and experience [religions.] Brainwashing, if you like, is the  extreme end of that; it’s the coercive, forceful, psychological torture type.”

She notes that “brainwashing”  which embraces all the subtle and not-so-subtle ways “we make people think  things that might not be good for them, that they might not otherwise have  chosen to think,” is a much more pervasive social phenomenon than we are willing  to recognize. As social animals we are all victims of culturally induced  brainwashing whose effectiveness correlates with our inability to think outside  the box of our given acculturation.

Previous Article
Iran Contra, Cocaine & the War on Drugs in the ‘Hood’
Next Article
D.C. Confab Organizes to Fight Rise of Fascism