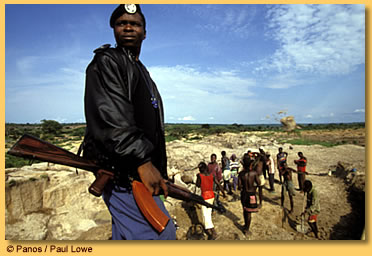 The Portuguese-language media is reporting that a rebellion took place last week against a number of diamond mining companies in the Curango municipality in north-east Angola. The rebellion by mine workers was started after some unlicensed diamond miners were expelled, was brutally repressed by security forces working for the mining multinationals. The police report one person has been killed and over 120 people have been arrested. However human rights defenders are saying that there are at least five deaths and over 400 people have been detained.

One of the companies involved in the brutality is Luminas, which is owned partly by Israeli billionaire and settlement magnate, Lev Leviev. This is not the first time that security forces working for Leviev’s have been involved in violence against mine workers in Angola.

Africa: Leviev’s alliance with Angola’s central government, which won the country’s civil war, led to his gaining primary control of the country’s rough-diamond supply in 2000. A security company contracted by Leviev was accused this year by a local human-rights monitor of participating in practices of “humiliation, whipping, torture, sexual abuse, and, in some cases, assassinations.”

Leviev’s formal response to the report did not directly address the abuses but touted his charitable activities in Angola.

In another connected story, members of the French government and businessmen are presently on trial in France for supplying illegal arms to Angola during the country’s civil war which was largely financed by diamonds. The monies involved in the diamond mines controlled by Jonas Savimbi’s UNITA, were huge for example in a six year period $3.7billion as were the number of people killed, wounded, raped and displaced - putting an added meaning to Blood Diamonds.