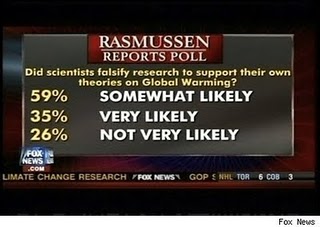 There’s a joke that runs around journalism circles that people who seek a career in the printer’s ink arts do so because they are horrible at math. Believe me, I’m no exception and I usually understand when a reporter or journalism scribe messes up the numbers in his or her addition. (That’s the one with the cross, right?)

But even a third grade remedial math student could figure out what’s wrong with the above poll that appeared on a recent episode of Fox & Friends stating the opinion of Rasmussen poll takers on the global warming email scandal. Here’s a hint: it’s not that they capitalized “Global Warming.”

The reporting company not only refuted the faulty statistics but called it a “stupid deception.” The actual poll had smaller figures that mirrored the same outcome but also included a fifteen percent “undecided” group the network somehow [sic] lumped and inflated into this poll.