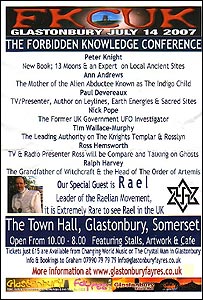 A poster advertising a cult UFO conference in Glastonbury was taken down after concerns that a swastika featured on it was causing offence.

The symbol is part of the logo for the Raelian movement which believes that humans are descendents of aliens.

Changing World Music, which was selling tickets for the event, removed its display poster after it was defaced.

Event organisers said that although the swastika was adopted by the Nazis, it was originally a symbol of peace.

The Raelian movement was started by a Frenchman who adopted the name Rael and claimed to have learned the alien origins of mankind through an encounter with extraterrestrials.

Its logo features a swastika entwined with a Star of David.

Graham Robertson, who designed the poster, said: “It’s a logo that I don’t find offensive, it’s unusual, but on the poster you can see the picture of Rael.” 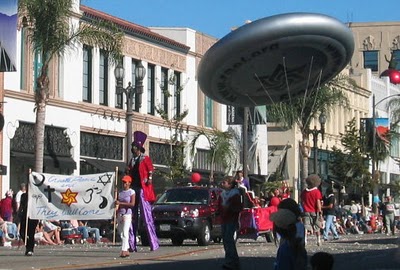 “… After spending time with the Raelians, Hashem claims members are brainwashed and sex is used as coercive tool to gain access to the finances of those in the group. …”

A young filmmaker says he infiltrated the UFO cult known as the Raelians, and he’s looking to blow the lid off the secretive group with footage he shot while undercover.

The Raelians are reportedly threatening legal action to prevent release of the exposé.

The documentary was produced by Abdullah Hashem, a half-American, half-Egyptian man from Mooresville, Ind., who just graduated from college this year.

Hashem, along with colleague Joe McGowen, attended a recruiting session for the Raelians, an international group which believes the first human beings were cloned by aliens who visited the Earth in flying saucers 25,000 years ago. They contend these aliens, or Elohim – a Hebrew word referring to God – will return to Jerusalem when there is world peace and an embassy has been built for them.

The group is headed by Frenchman Claude Vorilhon, a former race-car driver and journalist who renamed himself Rael after supposedly being visited in 1973 by a member of the Elohim. He described his visitor as being about 3-feet tall with long black hair, almond-shaped eyes, olive skin and exuding “harmony and humor.”

He says he discovered through this meeting that his father was an alien, and claims he was taken in the flying saucer to meet Jesus, Buddha and Joseph Smith, the founder of the Mormons. Rael now describes himself as a prophet and claims that cloning will enable humanity to attain eternal life.

In December 2002, the Raelians gained worldwide attention by claiming it had cloned the first human being, announcing the expected birth of a child named “Eve” to a 31-year old American woman who was never identified.

It was this claim, which remains uncorroborated and was even suggested to be a hoax by a high-ranking Raelian official, that sparked the interest of Hashem to reveal the clandestine activities of the Raelians.

“I’m not a religious nut, but according to my beliefs, when people wear shirts that say there is no God, I have to do something,” Hashem told the Mooresville-Decatur Times.

After spending time with the Raelians, Hashem claims members are brainwashed and sex is used as coercive tool to gain access to the finances of those in the group.

“We talked to a lot of homosexuals who said they joined because it’s the only religion not to have condemned them and they feel more comfortable there,” Hashem told the Times.

McGowen admitted having a hard time keeping his wits about him due to the seductive atmosphere.

“You have really attractive women who are out of a lot of men’s league, and they come up to you and touch you,” McGowen said. “I was seduced by a couple of women and got in pretty deep.”

And while sexual freedom is welcomed, Hashem says activities such as gambling are condemned, though he claims to have followed Rael into a Las Vegas casino and filmed him playing slot machines.

He says they were able to get close to Rael, but the pair did fall under suspicion.

“We were afraid of them and that they would find out,” Hashem said. “Some of the leaders didn’t trust us or talk to us, and one of the top guys seemed to be following us. I’m not sure that he was, but he would show up in odd places like when we were in Vegas on our own time.”

Hashem says his film contains highly damaging evidence, and the Raelians have since discovered the secret filming, reportedly calling and sending e-mails with threats of legal action should the movie be released.

Hashem says he’s willing to keep the film away from the public, but only if the group is disbanded and Rael resigns.

“They tried to offer us money and compensation, but we don’t want their money, we want them done,” Hashem told the Times. “We want to keep kids from being sucked in by this.”

“I wanted to do this because, though so many people look at this and know it is insane, they have more than 60,000 members,” McGowen said. “That means people are joining them. I want this out there so that parents can see what’s going on and have a chance to protect their kids.”
http://www.worldnetdaily.com/news/article.asp?ARTICLE_ID=45764