Racial Hygiene According to Steve Bannon and Donald Trump

Racial Hygiene According to Steve Bannon and Donald Trump

They also validate a core belief of white nationalists.

Former Breitbart head Steve Bannon has been a national lightning rod ever since he was appointed CEO of Donald Trump’s presidential campaign. At-issue: Bannon’s deep ties to the growing white nationalist movement, which provided some of Trump’s earliest and most fervent supporters.

On Sunday the New York Times published a profile on Bannon, casting him as a “combative populist.” Buried deep within the profile is an account of Bannon talking about his belief in the “genetic superiority” of certain people and his support for restricting voting rights to only property owners.

A former colleague of Bannon’s, Julia Jones, recounted her interactions with Bannon to reporter Scott Shane:

Ms. Jones, the film colleague, said that in their years working together, Mr. Bannon occasionally talked about the genetic superiority of some people and once mused about the desirability of limiting the vote to property owners.

“I said, ‘That would exclude a lot of African-Americans,’” Ms. Jones recalled. “He said, ‘Maybe that’s not such a bad thing.’ I said, ‘But what about Wendy?’” referring to Mr. Bannon’s executive assistant. “He said, ‘She’s different. She’s family.’”

Restricting voting to only property holders would take the country back centuries to its founding — when only white, male property holders could vote in most states. Today, such a restriction would disenfranchise huge swaths of people, including students, people of color, young Americans, many city dwellers, and low-income populations.

Far from populism, this is Revolutionary-era elitism drawn along racist lines. And for white nationalists, it’s a familiar goal.

Former KKK wizard David Duke, for example, has been proclaiming on Twitter that Trump’s election and cabinet picks are the first steps toward “taking America back” — that is, taking America “back” from anyone who isn’t descended from fair-skinned Europeans. In white nationalist ideology, only white Americans have a true right to the country — and the rights that go along with citizenship, like voting.

Bannon’s musings on voting restrictions are a dog-whistle to white nationalists. The same goes for his reference to “genetic superiority,” a view that Donald Trump also has said he shares.

Trump has repeatedly connected his success to his “good genes,” as ThinkProgress previously reported. He’s said that his children “don’t need adversity” to build character or skills, because they share his good genetics. In an interview once, he went so far as to compare himself to a “racehorse” and discussing his “breeding” at length.

The belief in the genetic predisposition of qualities like intelligence are a hallmark of white nationalism.

In Trump’s rhetoric on genes, white nationalists hear validation of their belief that genetics alone can qualify someone for leadership — or make them inherently inferior. Genetics and connections to race are a common theme on white nationalist, neo-Nazi sites like American Renaissance and Stormfront. 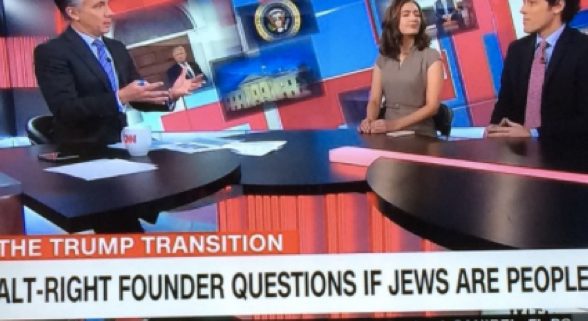 Yet despite the validation Bannon (and Trump) have given to white nationalist ideologies, many insist that the term “white nationalist” is inappropriate. Woven throughout the New York Times profile were quotes from Bannon’s friends and family pointing to his personal relationships with people of color, and therefore insisting that he was not, himself, a racist.

This sort of tokenism is a familiar rebuttal. Take Bannon’s excuse in the quote above that his black executive assistant was “different” because “she’s family.” It’s a near-textbook example of using, for example, having black friends as a defense against racism.

But this is a false parallel: It’s possible, even common, to hold negative views of a race in general, while thinking that a few members of that race are “different” and therefore acceptable. In fact, according to psychology, it’s an integral phenomenon to how we build and accommodate stereotypes.

In a recent interview with the New York Times, Trump said that he didn’t want to “energize” the group, and said that he “disavowed” them.

It was one of the very few times that Trump has tried to separate himself from his racist fan base in his year-and-a-half long campaign. But Trump offered no details about why, exactly, he felt compelled to disavow the group — and white nationalist ideologues have said that while his words were “disappointing,” instead they were focused on his actions.

Why his “disavowal” isn’t convincing.thinkprogress.org

And in his actions, Trump has elevated figures like Bannon and Alabama Sen. Jeff Sessions, another white nationalist favorite. Their history and words validate white nationalist ideas, as do some of Trump’s own. With validation from national leaders comes what Trump called “energy” — a public resurgence of white nationalist fervor.