Nazis Kept List of Powerful Allies in Los Angeles, Including a UCLA Co-Founder

In 1945, the FBI raided a warehouse in Los Angeles that was used for storage by the German Consulate. Among the files, they found a collection of 3x5-inch cards kept by the Nazi regime containing contact information for important people in LA. The cards included the names, addresses, and phone numbers of people in the entertainment industry, academia, and industry. And it serves as a terrifying reminder that the normalization of the Nazis in the 1930s provided cover for some very powerful people in the US to be friendly with genocidal maniacs.

I obtained a five-page document that contains the information from the cards as part of a Freedom of Information Act request to the FBI. I had previously requested all FBI documents on Norman Chandler, the former publisher of the LA Times who, it turns out, was hanging out with Nazis in the late 1930s. And now the National Archives has provided me with this document as part of that request.

The list doesn’t explicitly say that everyone on the list was working closely with the Nazis. But judging by what we know about some of the associations of those on the list, this was at the very least people who might be invited to a Nazi cocktail party. And at worst, people who were actively working with the Nazis and keeping in regular contact.

Dr. Erich Breitung, for example, is on the list and was head of the Los Angeles branch of the Nazi Party’s American information services in 1933. The organization was set up to distribute Nazi propaganda in the United States and had offices from Cincinnati to San Francisco. It’s very easy for Americans today to forget just how divided the country was about whether to get involved in World War II. And as late as 1939 the Nazis were holding rallies at Madison Square Garden in New York. As you can see from the photo above, these rallies were well attended and had signs like “Stop Jewish Domination of Christian Americans.”

The file notes that Noerdlinger will “gladly furnish info to [the German] Consulate.” Noerdlinger was educated in Switzerland and came to the United States in 1929. He worked for the MGM research department for over a decade and after World War II, Noerdlinger became Cecil B. DeMille’s personal research consultant, working on movies like The Greatest Show on Earth (1952) and The Ten Commandments (1956).

The cards had plenty of members of academia as well, including Ernest C. Moore, the co-founder of UCLA who in the 1930s called his university, “one of the worst hotbeds of campus Communism in America.”

The list of academic contacts also included Dr. M. Delbruck from the California Technology Institute (now known as Caltech); and a number of professors from UCLA like Rolf Hoffmann, Paul Perigord, Frank H. Reinsch, Alexander Graf von Wuthenau-Hohenturm, and Erik Wahlgren. Scientist and director of the Los Angeles Museum, W.A. Bryan, was also on the list.

Important members of American industry in Los Angeles, like the president of Lockheed, Robert Gross, were on the Nazi’s contact list as well. Lockheed’s planes would eventually become crucial to the American war effort, but Gross had no problem selling his Electra planes to Nazi Germany, fascist Italy, and Japan from 1934 to 1938.

Newspaper industry people on the list include Mrs. R. W. Trueblood and Edwin Schallert of the LA Times. Norman Chandler was also on the list, of course, and was “royally entertained” by the Nazi regime when the publisher visited Germany. Chandler chided American journalists who were critical of the Nazis in the 1930s, saying that they “peddled nothing but lies about National Socialist Germany.” Chandler was quite literally partying with Nazis until it became dangerous to his paper to do so.

You can read the entire list of Nazi contacts in Los Angeles that was confiscated by the FBI in 1945 here. At the very least it serves as a frightening reminder that authoritarian regimes aren’t above getting plenty of buy-in from allegedly “liberal” institutions like the press and academia. 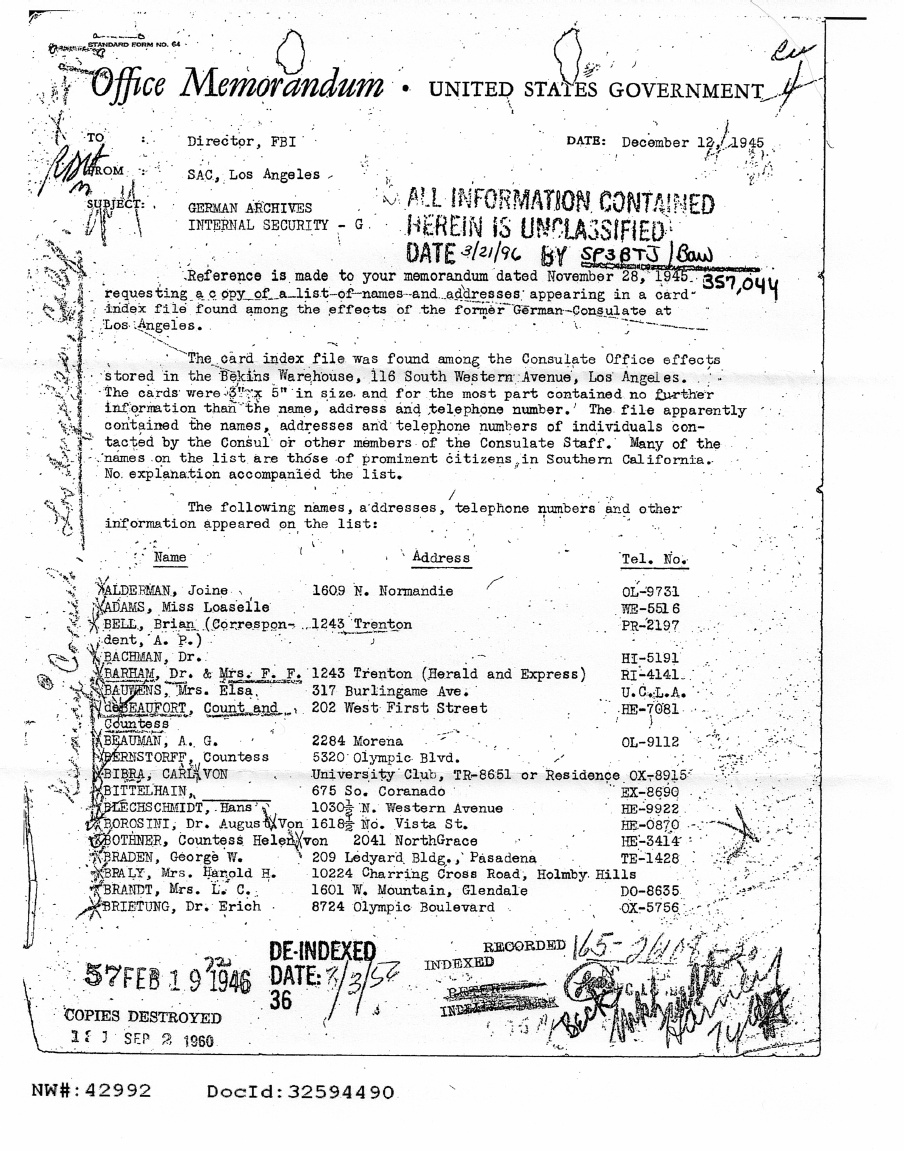 As far as I know, virtually none of the people on this list advertised their connection to the Nazis like Chandler did. But their connections to the Nazi regime no doubt stoked the flames of hatred in supposedly liberal American cities like Los Angeles—from the classroom to the newspapers.