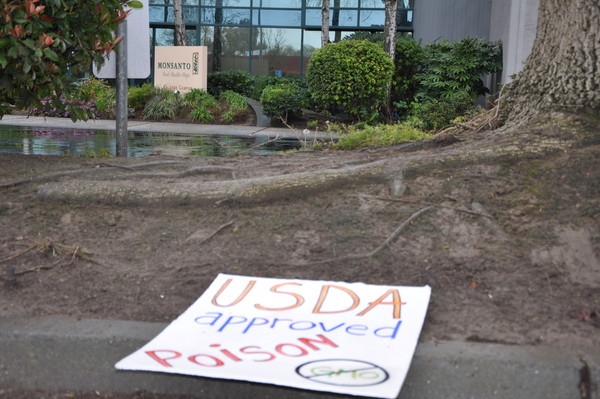 Protesters gathered in front of the Monsanto office on Fifth Street as part of a nationwide protest against the agricultural bio-tech company Friday morning.

Monsanto employees did not show up to the building, which appeared to be shut down for the day because of the protest. Two security guards stood near the entry while a crowd held signs on the sidewalk on Fifth Street while it sporadically rained.

Several police cruisers maintained a presence in the school district parking lot across the street. One protester also pointed out that a man had been looking down on them from the next-door building all morning. We don’t have any details as to who that person was. (He’s in the pictures above).

Protestor Carisa Torres, who drove down from Shasta County, said her main reason for attending was that she wants all genetically modified foods (like many of the ag products Monsanto produces) to be labeled as such. She was collecting signatures to get the issue on the ballot.

“Labeling is the strongest way to push products out,” she said, noting that some European countries have begun labeling GMOs, and consumption has dropped as a result. She said her goal is not to ban anything, just to have the products labeled.

“Are you not proud of your product?” she said of the company. “Why hide it?”

Here’s Monsanto’s answer to that question on their website.

U.S. labeling laws are based on health and safety. Requiring labeling for ingredients that don’t pose a health issue would undermine both our labeling laws and consumer confidence. Ensuring that such labeling is accurate would also put a huge burden on regulatory agencies.

Torres says, however, that this is just Monsanto’s tactic for fighting against the labeling requirement. She also discussed the company’s strong political power.

The protesteres at the event were a blend of various causes, form food movements to Occupy to the United Native Americans, which is the group Quanah Brightman came with. He pointed out the community garden across the street from the Monsanto building.

“It’s like a silent protest in and of itself,” he said. “Isn’t that beautiful?”

Previous Article
NPR Propaganda: Fake Debate on U.S. Role in Syria
Next Article
Out of the Past: One Jackson, Mississippi Clarion-Ledger Reporter vs. KKK Killers

Out of the Past: One Jackson, Mississippi Clarion-Ledger Reporter vs. KKK Killers
Mar 17