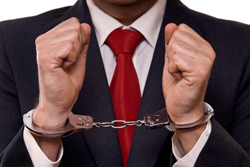 Why have there been no criminal prosecutions of corporations for international war crimes? Crimes like pillage – the theft of natural resources during wartime? That’s a question that James Stewart wants answered.

He’s a Global Hauser Fellow at NYU Law School. And he has authored a recent paper on the subject – A Pragmatic Critique of Corporate Criminal Theory: Atrocity, Commerce and Accountability.

Stewart was moved by the atrocities in the Democratic Republic of the Congo, where he spent time over the past decade or so.

“In 2001, the United Nations Security Council established this investigative body to assess the extent to which illegal exploitation of natural resources in the Congo exacerbated massive violence,” Stewart told Corporate Crime Reporter in an interview last week. “Something like 4.2 million civilians were killed in the Congo since 1998,” Stewart said. “And this panel of experts over the space of three years comes up with an extremely detailed report that names 84 companies as having illegally exported natural resources from the Democratic Republic of the Congo. This is a very important issue, because illegal exploitation of natural resources has surpassed superpower sponsorship as one of the most prominent means of conflict financing since the end of the Cold War.”

“Any aggrieved party in a country that is rich in natural resources can exploit diamonds and gold and tin and all sorts of minerals and natural resources. They use the proceeds from this to buy weapons through the illegal weapons trade. And they use those weapons to continue a conflict characterized by massive human rights violations.”

“It produces this kind of vicious triangle. At the top of the triangle is the continuing of violence. And at the two peripheries is illegal exploitation of natural resources and illicit weapons flows. And it strikes me that we focus too much on the apex of the triangle. We focus far too much on mopping up – murder, rape, torture – after everything has run its course. It’s better to intervene and focus on the bottom two peripheries of the triangle, for which a great number of international corporate actors are engaged and responsible.”

“There is no shortage of companies that have been named for having violated arms embargoes by selling weapons to notoriously brutal regimes all over the world. There is no end of allegations against companies for having purchased natural resources from warlords. They certainly didn’t have title to the natural resources that they sold to companies. And in a way, these practices have been ongoing for a very long time, in part because there has never been any accountability whatsoever.”

“Part of the work that I’m doing is trying to bring accountability to a field where there has been none.”

Which international prosecutor would be inclined to bring such a case?

“My greatest interest is not in international institutions at all,” Stewart says. “It is in domestic courts prosecuting their own corporations. That is so much more legitimate. Things are structured in such a way that states are starting to prosecute their own nationals for international crimes, which is a massive shift. And prosecuting corporations is the next stage in that shift.”

What is an example of a state prosecuting its own nationals for one of these types of crimes?

“Britain recently prosecuted its own soldiers for war crimes in Iraq,” Stewart says. “The Netherlands prosecuted two of its business people for international crimes through selling weapons. There are no examples of corporate criminal liability on this level just yet, but I sense that is the next inevitable stage.”

“Part of my work is to point out there already is a legal regime in place to address it, but it’s just latent and general. Take the idea of pillage – theft during war.”

“Companies that steal natural resources by purchasing them from warlords that have no title in them, can be held responsible for the war crime of pillage. Pillage is a war crime within the United States. And any reference to 'person' includes a corporation. And the War Crimes Act in the United States covers any person who commits a war crime including pillage.”

“So, my research says – please stop saying that corporations can’t be responsible for international crimes. Here is how it works in about 16 countries around the world. We should start exercising this power if we are serious about accountability.”

If you were a prosecutor and had the ability to prosecute these cases, would you have in mind a hierarchy of cases to investigate?

“I would be very focused on the Democratic Republic of the Congo. You don’t have to scratch the surface very deep to find all kinds of evidence against a range of corporations – including U.S. corporations.”

“The situation has gotten to the point where companies are very complacent because there has never been any accountability. Can you imagine what happens in any situation where there is absolutely no accountability? It produces a culture of complacency.”

“The problem globally is endemic. It’s not difficult to find cases.”

“Let’s look at the mineral coltan, which is necessary for cell phones and laptops. The only place in the world – other than the Democratic Republic of the Congo – that produces coltan in significant quantities, is Australia.”

“And sometime around the year 2000, Australia stopped producing coltan for a period of time. And it spiked the price of coltan globally tenfold or thereabouts. And this produced a tremendous effect on atrocities in the Democratic Republic of the Congo as warring parties vied for control over resource rich areas. They would steal the resources. Ownership meant nothing. They would forcibly take the resources. They will sell them to willing foreign companies that would purchase them. And they use the proceeds to buy weapons to continue mass violations of human rights. This is part of the dynamic that has been taking place over time.”

We put it to Stewart that the corporate crime establishment in the United States, the Justice Department and the major defense firms – would fear the slippery slope. You are talking about Darfur, Sudan, Congo. What they are worried about is Iraq, Afghanistan, Israel/Palestine.

“That just comes back to the point of the power of corporations,” Stewart says. “There is no way of getting around that problem. Corporations are especially powerful and they have ties to powerful governments. But I don’t think that defeats the project. There are opportunities for accountability which are new. And it’s not going to be a perfect system because politics will always interfere at some level. But it is going to be a system that brings greater teeth to the desire to deal with extractive industries involved with blood diamonds or weapons being sold to notoriously brutal regimes.”

What about making the case for criminal prosecution of the five major defense contractors in the United States for complicity in illegal U.S. wars?

“The illegal U.S. wars are not technically the type of crime I’m interested in. And probably there is no basis to prosecute. The technical term for an illegal war is aggression. And there is almost no basis on which one can prosecute aggression in any domestic or international court.”

Stewart says that after World War II, “there was this project of international criminal justice which led to tribunals and courts.”

“After World War II, pretty much all countries implemented international crimes into their own national criminal systems. The best example of that in the United States is the War Crimes Act. Federal courts in this country have jurisdiction over war crimes. This happens in lots of different places around the world.”

“There is some outside nebulous chance that there could be these sorts of prosecutions, but the chances of them are much less than a prosecution for pillaging natural resources, because pillage already exists in the United States, Australia, Britain, France and Germany.”

The United States currently does not criminalize wars of aggression?

“The United States does not. Very few countries do.”

Were the Nuremberg prosecutions of corporations for complicity in wars of aggression?

“After the Second World War, there were no companies prosecuted,” Stewart says. “But business people were prosecuted, some for complicity in wars of aggression. But the vast majority were prosecuted for pillaging natural resources.”

“The Nazi government sent business people into Russia and Poland and everywhere else, and they just took over mines. And they just stole massive quantities of natural resources to fuel the German war machine. And in a way, that is not very different from what warlords are doing in Africa. They are exploiting natural resources that they don’t own in order to sustain their war machines.”

“That was one set of cases. Another set of cases had to do with the business people who sold the chemical Zyklon B to Auschwitz. They were prosecuted for complicity in murder because they provided the means for the extermination. That’s a very extreme example, but it’s the very same legal methodology which has broad implications for weapon vendors selling all sorts of weapons to brutal regimes.”

[For the complete q/a transcript of the Interview with James Stewart, see 26 Corporate Crime Reporter 40(12), October 15, 2012, print edition only.]

ALSO SEE: "Kiobel v. Shell: Will ‘Enemies of All Mankind’ Be Held Accountable?"