A Good Way of Life "Brought to You by Tbe Holocaust"

" ... A Prairie Home Companion is heard by 4 million listeners each week on more than 600 public radio stations, and abroad on America One and the Armed Forces Networks in Europe and the Far East. Garrison recalls, 'When the show started, it was something funny to do with my friends, and then it became an achievement that I hoped would be successful, and now it's a good way of life.'

"A Prairie Home Companion is produced by Prairie Home Productions, and distributed nationwide by American Public Media. The program is underwritten by Allianz ..."

On his quirky-comedic "public" (volkish?) radio program, Garrison Keillor proudly announces week after week that the "publicly-supported" show is sponsored by Allianz -- or "All-Nazi," as angry protestors in Boca Raton had it last year:

The insurance conglomerate tries to promote its brand in Florida with a golf tournament. But the firm’s past catches up with it 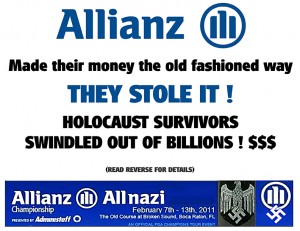 The demonstrators in Boca Raton appeared a bit forlorn standing at a major intersection by the entrance to the famed Broken Sound golf course. But the mostly sedate and older men and women in casual dress are committed to a cause. They raised an Israeli flag and held aloft hand-made signs for the benefit of passing drivers and local TV news cameras. They are accusing the German insurer Allianz of profiting from the Holocaust.

The sign carried by David Schaecter, one of the organizers of the demonstration, sums up the point of the protest. On his placard are words painted in blue, framed by a swastika: "ALL-IANZ" and "ALL-NAZI". Schaecter, president of an association of Holocaust victims, and his colleagues are calling for a complete disclosure of information on insurance policyholders from the Nazi period. They seek restoration of the right to sue for compensation in the American courts. And they want $ 2 billion.

Meanwhile, on the manicured golf course behind the demonstrators, senior players on the American golf tour, including German golf pro Bernhard Langer, competed for $1.7 million in prize money at the Allianz Championship. "My father’s claims were denied, but Allianz has money to sponsor a golf tournament," says an indignant Wendy Reiss Rothfield, an elegant woman with straw hat and large sunglasses, holding a sign alleging Allianz stole from Nazi victims.

Bill in Congress could open door to new lawsuits

The Munich-based insurance company, whose subsidiary Allianz Life in America is a major player in the annuity market, is attempting to promote its name in the United States through sponsorship of the Allianz Championship in Florida and other sporting events. This is the second time that promotional efforts by the insurer have gotten caught up in its history.

In September 2008, Allianz tried to secure the long-term naming rights to a major New York sports stadium, at a cost of 25 million dollars a year. After an editorial column in the New York Times expressed concerns about the historical involvement of Allianz, protests broke out, taking the proposed business deal off the table. Demonstrations are not the only challenge threatening Allianz. In the U.S. Congress, a bill in the works could lead to lawsuits against insurers, costing them billions.

For Allianz, the Holocaust is clearly a sensitive topic. Representatives of the financial services giant sound frustrated when discussing the efforts of their company to overcome its past and ensure as fair a compensation as possible.

"We have never denied the allegations. We must openly and honestly deal with it, but no amount of money can make up for what happened," says a spokeswoman.

Financial compensation for unpaid insurance policies from the Nazi period appeared to be wrapped up four years ago. After class action lawsuits were filed in the U.S. during the 1990s, six European insurance companies - including Allianz, Italy's Generali and the French insurer AXA - ponied up about 300 million dollars to compensate victims of the Holocaust.

Demonstrators: many victims live in poverty

The work of a compensation commission called ICHEIC, in which the Israeli government American insurance regulators, and international Jewish organizations were involved, was completed in 2007. A successor organization in New York is processing subsequent claims. "Our doors are wide open to people who think they have any outstanding policies from that time," said an Allianz spokeswoman. That is not sufficient for the demonstrators in Boca Raton

"They have not done nearly enough," says Janice Friebaum, the daughter of a survivor. Time and again, protesters pointed out that many victims of the Holocaust live in poverty. And there is deep distrust felt toward the Jewish organizations that participated in the International Commission.

"Some [claimants] were paid off," said 82-yearold Jack Rubin, who received $1000 in aid from ICHEIC. "This amount is not humanitarian; , it really was a way [for survivors] to say, ‘just

leave me in peace’."

The financial claims [on unpaid Holocaust-era insurance policies] exceed the amounts paid out many times over. Economist Sid Zabludoff estimates the value of the policies at 17 billion dollars. Based on this calculation, Allianz’s share of this liability would be $ 2 billion. European insurers agreed to the compensation process only because they obtained "legal peace" from the American side - the assurance that after they paid the settlement, they would not have to face further claims in the American courts. The lawyer for the Holocaust victims, Sam Dubbin, however, questions this assumption.

"There was no formal agreement on legal peace," he says. Yet there is no doubt that the American courts, at the urging of the government, have allowed no more individual lawsuits against insurers. Therefore, there are efforts in Congress to overturn the de facto legal peace. Republican Representative Ileana Ros-Lehtinen of Miami has repeatedly filed bills to restore the right of Holocaust victims to proceed with claims against insurers. Ros-Lehtinen blamed the failure of these previous initiatives on nsurance industry lobbying and a lack of interest among influential politicians. Major Jewish organizations also argued in a joint letter against the law because it would raise false hopes among Holocaust victims.

But Ros-Lehtinen will not back off. "I will introduce a Holocaust Insurance Act similar to past legislation," she announced at the end of December. With the electoral victory of the Republicans in the November elections, her influence as a legislator has expanded. Ros-Lehtinen now sits as Chairman the Foreign Affairs Committee in the House.

The organizers of the protest of Boca Raton threaten a sustained and major campaign against Allianz. For now, they have achieved a small victory. Wolfgang Ischinger, Allianz’s chief lobbyist and former German ambassador to the United States, plans to meet with Schaecter on his next trip to the States.

Allianz wasn't duped or even forced to comply with the Nazi regime. The insurer's CEO was a Hitler advisor. Allianz is laundering its reputation in Lake Woebegone. The question is: Why does Keillor accept funding from a company with known ties to the National Socialist Party?

Giants Stadium won't be Renamed for Company with Nazi Ties