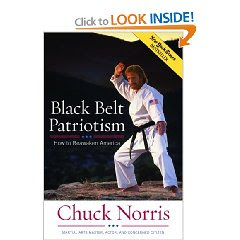 "It's a new age of terror that requires a new breed of warrior.... The stakes are more than pride, more than honor, more than justice. Because they are fighting to save American lives." - Narration from the trailer for Chuck Norris' 1986 anti-terrorist action-fest, The Delta Force.
http://www.latimes.com/entertainment/news/movies/la-et-chuckabee5jan05-pg,0,7138047.photogallery?coll=la-home-entertainment

Wikipedia: Norris "joined the United States Air Force as an Air Policeman in 1958 and was sent to Osan Air Base, South Korea. It was there that Norris acquired the nickname Chuck and began his training in Tang Soo Do (tangsudo), an interest that led to black belts in that art and the founding of the Chun Kuk Do ("Universal Way") form. He eventually created the education associations United Fighting Arts Federation and "KickStart" (formerly "Kick Drugs Out of America"), a middle school and high school–based program intended to give at-risk children a focus point in life through the martial arts. When he returned to the United States, he continued to act as an AP at March Air Force Base California. Norris was discharged in August of 1962. He worked for the Northrop Corporation and opened a chain of karate schools ... " 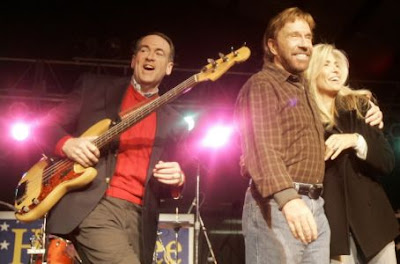 Norris: "Protestors of Proposition 8 in California (the marriage amendment) shoved aside a 69-year-old woman who was bearing a cross. They reportedly spit on her and stomped on her cross. They then aligned themselves in a human barricade, blocking the media from getting to or interviewing the woman. ... "
http://www.hollywoodgrind.com/tag/chuck-norris/

Wikipedia: " ... Now an outspoken Christian, Norris is the author of several Christian-themed books, such as The Justice Riders. He has also been in a few TV commercials promoting Bible study and prayer in public schools, in addition to efforts to reduce drug use. In 2006, he began penning a column for the conservative news website WorldNetDaily, sharing his 'musings about faith, family, freedom, country, loyalty – maybe even kickboxing.' ... " 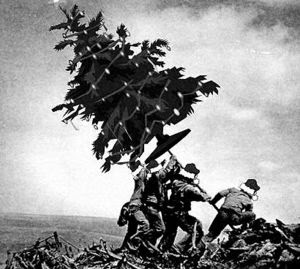 Who needs Bill O'Reilly to save us from the evil anti-Christmas forces? We've got Chuck Norris, people.

In his latest column for the conservative Web site World Net Daily, which is headlined "Jacking Jesus," Norris writes about his concern over "a new Christmas fetish -- neutering nativities by jacking the Jesus." Some of the choicer bits:

"Just over the past week, dozens of mini-messiahs have been nabbed from nativities across the country...

"To prevent further sacred thefts, thousands of churches and private residents are turning to technology to help them 'save Jesus.' But when GPS devices have to be planted in the skulls of the savior, and security cameras have to guard the path of the three wise men, can't we see that society is a bit off-center? ... " 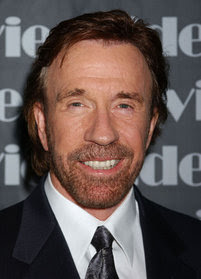 Norris is a Republican, often championing the views of the party. Norris has donated more than $32,000 to Republican candidates and organizations since 1988. On January 26, 2007, Norris filled in for Sean Hannity as a co-host on the popular Fox News Channel debate program Hannity & Colmes alongside Alan Colmes.

Chuck Norris supports gun rights and ownership, and is against public schools condoning homosexuality. He also does not believe in the theory of evolution, but subscribes to intelligent design.

On October 22, 2007, Norris announced his endorsement of Arkansas Governor Mike Huckabee for President. Norris said, "I believe the only one who has all of the characteristics to lead America forward into the future is ex-Arkansas Gov. Mike Huckabee."

On May 10, 2008, Norris was the commencement speaker at the deceased televangelist Jerry Falwell's Liberty University, addressing a graduating class of more than 4,000.

After the 2008 presidential election, Norris drafted a letter to President elect Barack Obama, stating that he should uphold the Constitution, protect the rights of the unborn, and not follow the precedent of the past US Presidents.

On November 18, 2008, Norris became one of the first members of show business to express support for the California Proposition 8 ban on same-sex marriage, and heavily criticized the gay community for interfering with the democratic process and the double standard he perceived of criticizing the Mormon Church without criticizing people of color. ...

Norris, in Black Belt Patriotism: "I don’t know who to trust. I don’t trust any of them. Ron Paul is the only guy I trust. … If I had one wish, if they give me one wish, I’d like to line up all the members of Congress, and have Ron Paul walk with me down the line and say, 'Okay, which one’s corrupted? Which one’s corrupted?’ And the ones he says, points to as corrupted I will choke them unconscious and stick them into a pile."
http://www.abovetopsecret.com/forum/thread418833/pg1