(Reuters) - One-third of Americans reject the idea of evolution and Republicans have grown more skeptical about it, according to a poll released on Monday.

Sixty percent of Americans say that "humans and other living things have evolved over time," the telephone survey by the Pew Research Center's Religion and Public Life Project showed (Click here for the full survey).

But 33 percent reject the idea of evolution, saying that "humans and other living things have existed in their present form since the beginning of time," Pew said in a statement.

Although this percentage remained steady since 2009, the last time Pew asked the question, there was a growing partisan gap on whether humans evolved.

"The gap is coming from the Republicans, where fewer are now saying that humans have evolved over time," said Cary Funk, a Pew senior researcher who conducted the analysis.

The poll showed 43 percent of Republicans and 67 percent of Democrats say humans have evolved over time, compared with 54 percent and 64 percent respectively four years ago.

Among religious groups, white evangelical Protestants topped the list of those rejecting evolution, with 64 percent of those polled saying they believe humans have existed in their present form since the beginning of time.

"This has been a staple of evangelical Protestantism for nearly 100 years," said Alan Lichtman, an American University history professor and author of "White Protestant Nation: The Rise of the American Conservative Movement." 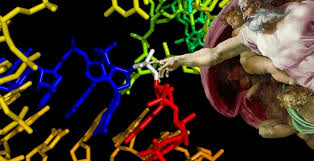 A quarter of those surveyed told Pew that "a supreme being guided the evolution of living things."

The survey of 1,983 adults in all 50 states was conducted from March 21 to April 8. The margin of error was 3 percentage points, meaning results could vary that much either way.

(The penultimate paragraph of this story has been corrected to say that one-fourth of all surveyed believe a supreme being guided evolution.)