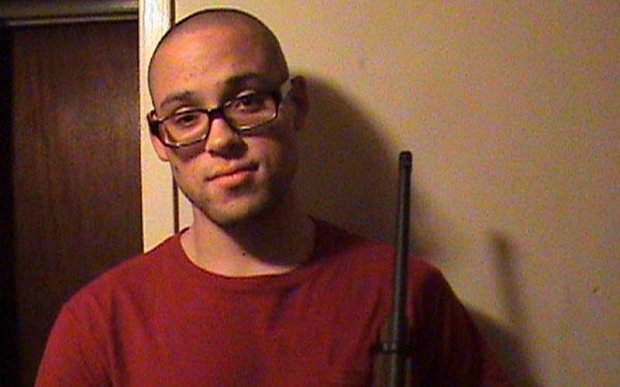 Nine people were killed and at least 10 injured by a gunman at Umpqua Community College in Roseburg, Ore., on Thursday. The gunman was later killed in a shootout with police.

Chris Harper Mercer, the shooter in the attack at Umpqua Community College in Oregon, was a “hate-filled” individual, who held anti-religion, anti-government and white supremacy leanings, according to two law enforcement sources familiar with the investigation.

During the Thursday rampage, Mercer, 26, wore body armor and had extra ammunition, although it is unclear whether he carried the ammunition during the shooting or left it in his car, a federal source said Friday. …

The attack left 10 dead, including Mercer, and at least 10 injured.

Mercer, who was also obsessed with guns, left behind an angry, hate-filled note, said another source who was not authorized to discuss the investigation.

The gunman, who was killed in an gunfight with police, also liked to discuss military history, sources said. …

Hanlin also said investigators interviewed neighbors and others at the college to learn more details about Mercer.

Local hospitals were strained by the sudden flow of wounded and dead.

“Yesterday was a challenging day,” Gray told reporters. “The days and weeks ahead will be the most challenging” as the rural community of about 22,000 people tries to deal with the aftermath of the shooting that touched almost everyone’s life. …

None of the victims was named. Gray said they were men and women of varying ages, saying the average age skewed young. Some of the victims’ injuries, he said, included gunshot wounds to the abdomen and head.

Of those treated, one died, two were quickly treated and released and three were transferred to a hospital near Eugene for higher-level care, Gray said.

Of the four remaining patients, one was discharged late Thursday and one is expected to leave Friday.

One patient was listed in stable and one in critical condition, he said.

The shooting is the latest is a series of attacks on educational institutions that has left scores dead. Each has prompted calls for tougher gun control laws.

Hanlin spoke out against state and federal gun-control legislation last year, telling a state legislative committee that mandating background checks for private, person-to-person gun sales would not prevent criminals from getting firearms.

Hanlin also sent a letter to Vice President Joe Biden after the 2012 shooting at a Newtown, Conn., elementary school.

Hanlin said he and his deputies would refuse to enforce new gun-control restrictions “offending the constitutional rights of my citizens.”

Hanlin told CNN on Friday that his position on gun control had not changed following Thursday’s shooting in his town.

The White House’s failed push for gun-control legislation after the Newtown shooting — in which 20 children and six adults were killed at an elementary school — deeply frustrated President Obama, who was visibly upset as he addressed the nation after Thursday’s attack.

“I’d ask the American people to think about how they can get our government to change these laws and to save lives and to let young people grow up, and that will require a change of politics on this issue,” Obama said.

Obama said there is a gun for roughly every man, woman and child in the United States. He asked how anyone with a straight face can make the argument that more guns will make people safer.

“I hope and pray that I don’t have to come out again during my tenure as president to offer my condolences to families in these circumstances,” Obama said. “But based on my experience as president, I can’t guarantee that. And that’s terrible to say.”