Rising Russian opera star Evgeny Nikitin has pulled out of the lead role in Wagner’s The Flying Dutchman at the Bayreuth opera festival after a German TV programme showed footage of the baritone sporting a Nazi tattoo.

The footage, which was broadcast last week, showed highlights from Mr Nikitin’s past as a heavy metal singer and drummer. In one sequence he could be seen playing the drums with many of his tattoos visible, including one that appeared to be a large swastika.

After the scandal erupted, the festival’s directors called Mr Nikitin in for a meeting about the programme, following which the singer he announced he would quit the The Flying Dutchman.

According to a statement from the Bayreuth festival, its organisers made Mr Nikitin aware of “the connotations of these symbols in connection with German history”.

The festival was founded in 1872 by Richard Wagner, who was admired by Adolf Hitler.

The festival’s reputation has long been soiled by its association with the Nazis. Hitler was a supporter of the event and Wagner’s wife, who ran the festival after the death of her husband, was an admirer of the Nazi dictator.

In a statement posted on the festival’s website, Mr Nikitin, 38, said: “It was a major mistake in my life, and I wish I had never done it.

“I was not aware of the extent of the confusion and hurt that these symbols would cause, particularly in Bayreuth and in the context of the festival’s history.”

The scandal is a major blow to the reputation of Mr Nikitin, who told Deutsche Welle that the tattoo had been done in his youth at a time when he “preferred spending time on the street more than anywhere else” and made “many mistakes”.

http://www.thejc.com/news/world-news/70392/opera-star-quits-bayreuth-over-nazi-tattoo
Previous Article
Toronto Mayor in Hot Water over Photograph with Neo-Nazi
Next Article
Christian Jihad? Why We Should Worry About Right-Wing Terror Attacks Like Norway’s in the US 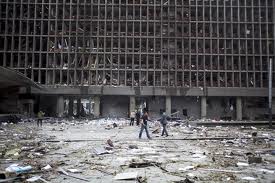 Christian Jihad? Why We Should Worry About Right-Wing Terror Attacks Like Norway’s in the US
Jul 29