On the trail of Oswald and the CIA

Whenever I find a story like this - verifying the work of independent researchers who struggled against blacklisting by corporate publishers (I'm one of those, thus the title of this blog) and controlled press - once, just once, I'd like to read somewhere in the text an apology to "conspiracy theorists" for the grief they've received from the Mockingbird press for too many years. There was a time when the following story would be viciously attacked, the author smeared and disgraced and possibly even ruined - IF he managed to get the sanguine public's attention. Gary Webb comes to mind. His violent death illustrates how anyone who reports the truth can be broken. Researcher Mae Brussell was harassed by the FBI, her daughter murdered - because from the bone she was offended by the advance of fascism in her country and resisted by educating herself.

She was shunned by the media, ignored by fascism's programmed androids:

"A man hears what he wants to hear,
and disregards the rest ... "
- Simon & Garfunkel

But history rolls on, and now the NY Times, Miami Herald, etc. have discovered that the CIA is withholding Oswald files. This has led them to the CIA's false testimony, shredded files, anti-Castro Cubans. The authors of these stories don't consider themselves to be fringe conspiracy lunatics. Neither did the researchers who got there first.

The "theorists" who first reported these "revelations" - in books ignored or scorned by the press - receive no apology for being right all along. There is no recognition that they risked their lives and reputations to expose the rot in the American intelligence community. And that, too, is some sort of crime, IMhO. - AC 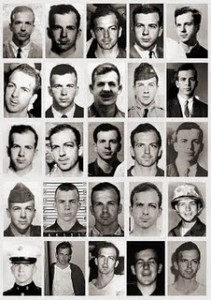 " ... CR: Were you surprised that the reins on these old files are still being tightly held under the Obama administration?

Morley: You know, I was surprised. I thought Obama had some nice rhetoric about openness. He signed an executive order his first day in office and said he wanted to usher in a “new era of open government.” I thought that was going to make a difference, and I was wrong. ... "
-----
By Steve Perry
St. Paul Legal Ledger/October 22, 2009

Nearly 46 years after the fact, the CIA is still refusing to release files that may shed additional light on the assassination of President John F. Kennedy. And this latest skirmish over access to the historical records comes with strong Minnesota ties.

As The New York Times reported last week, journalist and author Jefferson Morley, a Minneapolis native, has spent more than 10 years pursuing answers in the case of George Joannides, a CIA officer who in 1963 was running a covert operation that had encounters with Kennedy’s killer, Lee Harvey Oswald. (Disclosure: Morley and I were colleagues for a time at the Center for Independent Media, which owns the Minnesota Independent website.)

It’s an inquiry Morley took up after examining records made public in the 1990s, through the work of the JFK Assassination Records Review Board, a panel headed by federal Judge John R. Tunheim of Minnesota. Though that board is long dissolved, Tunheim supports the release of the Joannides files and has said he may appeal directly to CIA Director Leon Panetta for their disclosure.

Next month, a hearing is scheduled in Morley’s continuing Freedom of Information Act lawsuit to compel release of the files. Capitol Report spoke to Morley by phone from his home in Washington DC.

Capitol Report: You’ve been on this investigative trail for over a decade. Where did it begin, and what put you on it?

Jefferson Morley: I first got interested in the Joannides story in 1998. The JFK Assassination Records Review Board declassified some records about him, and those records showed that he had this very curious dual role in the assassination. He appears not once but twice in the story — the first time as an undercover officer in Miami in 1963, running a Cuban student organization whose members had various contacts with Lee Harvey Oswald before President Kennedy was killed, and publicized those encounters. Then in 1978, when Joannides was the CIA’s liaison to a congressional investigation that reopened the JFK case.

This was what really caught my interest. When he was working with the congressional investigators in 1978, he never disclosed his role in the events of 1963. It wasn’t until 35 years later that any of this story surfaced. That was very striking to me as well. Why had this been hidden? This was obviously a person with knowledge about the assassin. He would have been knowledgeable about the Cuban students’ contact with Oswald.

CR: Were you surprised that the reins on these old files are still being tightly held under the Obama administration?

Morley: You know, I was surprised. I thought Obama had some nice rhetoric about openness. He signed an executive order his first day in office and said he wanted to usher in a “new era of open government.” I thought that was going to make a difference, and I was wrong. It did not affect the CIA’s position.

CR: What’s the range of possible reasons for their refusal to turn over these documents?

Morley: I never theorize about what’s in the file, because I don’t know what’s in the file. There’s a bunch of possible explanations, ranging from the fairly innocuous — Joannides might have been basically a bystander who, like a lot of people, had encountered Oswald. That’s a possibility. There are other possibilities, and one is that he was running an authorized covert operation around Oswald that has never been disclosed to this day. That would be much more embarrassing, and maybe even sinister.

We don’t really know, and it would be premature to judge without the evidence. But the fact that all this remains hidden, and that the CIA is so adamant about preventing any disclosure, is troubling. The CIA’s description that they have submitted in court records in my case of Joannides’ activities is utterly misleading.

They are pretending that Joannides had nothing to do with these Cubans who had contact with Oswald. That is just false, based on the CIA’s own declassified records. So it’s a combination of Joannides’ troubling behavior — he never disclosed what he knew — and the CIA’s continued stonewalling. The CIA’s behavior invites … there’s just something deeply troubling about it.

I don’t want to get drawn into the game of, oh, here’s what happened. It’s not my job to do that. It’s the CIA’s job to comply with the law.