Euclid Democrat Kent Smith touts his 2008 book, “Please God Save Us,” as proof of his qualifications to serve in the Ohio House. Facing questions about the book’s content, Smith has recently sought to distance himself from its coauthor.

“The Republichrist is leading the charge to war with a ‘Crosstika’ staff (half swastika, half cross). It’s designed to create blind faith and allegiance, much as the swastika was used by Nazi Germany,” explains the caption of a Hess piece titled “Republichrist Jihad Devil.”

The “Crosstika” appears on the book’s cover and throughout “Please God Save Us.” Other pieces from Hess include a red elephant being crucified, a row of elephant heads on spikes in front of the White House and a dog ripping the throat from a fox bearing the Fox News logo.

“The art depicts the country’s mood at that point,” Smith told Cleveland NBC affiliate WKYC 3 in a mid-September interview. “I’m responsible for zero of the artwork.”

And according to Northeast Ohio Media Group at Cleveland.com, Smith “said he was not responsible for the book’s artwork and he and the artist completed the book separately.”

But Smith had probably seen much of the art included in “Please God Save Us” when he undertook the project with Hess.

A 2008 Detroit Metro Times story noted the book was “born out of” a 2006 Hess display called “Please God Save Us From Your Followers.” Smith acknowledged as much in the book’s introduction.

“The purpose of this publication is to memorialize and explain the artwork of Derek Hess as it was displayed on December 15, 2006,” Smith wrote.

“Internationally known artist Derek Hess and Cleveland area politician Kent Smith test the minds and ideals of the nation with, ‘Please God Save Us’ a politically charged book that takes Hess’ infamous pieces from the gallery wall and pairs them with Smith’s witty rants,” says the book’s jacket.

“Neither the art nor the words claim to be fair and balanced; just factual and correct,” Smith’s introduction explains. “Hess’s goal of the art-opening was to challenge the complacent and the undecided; this publication takes it a step further  — we want you to be convinced.”

The book was released in mid-2008, specifically because Smith and Hess “knew they had to get it out before the presidential election.” After the election, Hess distributed free Obama posters with copies of the book.

Smith, head of the Democratic Party in Euclid and a former school board member, has used “Please God Save Us” as a selling point for his candidacy in Ohio House District 8.

Smith discusses “Please God Save Us” in the biography on his campaign website. A separate page of his campaign site is dedicated to reviews of the book, and his campaign’s only blog post begins with a paragraph about the book.

“No one is challenging what I’ve written. That’s because they haven’t read it,” Smithtold WKYC 3 last week, adding, “My GOP Tea Party opponents are offended by this book because it’s about them.”

Smith is endorsed by Rep. Armond Budish — the Democrat former House speaker who holds the 8th District seat Smith seeks — and by the Cleveland Plain Dealer, a subsidiary of Northeast Ohio Media Group. Budish is running for Cuyahoga County executive.

In a Cleveland.com comment thread following the outlet’s story about “Please God Save Us,”  NEOMG reporter Jackie Borchardt admitted she had not read the book.

Following are several excerpts from Smith’s essays in the book:

“Let’s face it: the American Church, the Republican Party and the Religious Right are only interested in furthering a set of economic policies that will concentrate and protect their wealth. Unborn life is a tool to get a segment of votes from a population that will not benefit from their ‘the rich first’ programs and priorities.” (pg. 16) “The Republican reaction to losing the moral highroad to the Democrats during the 1960′s was to create fables of fear.” (pg. 12) “The Republican Party has used its pro-church message to divide the country and win elections. But they are not interested in making America a more Christian nation, in fact, they do not even believe the message themselves. If they let the Gospels shape their political agendas, they would not seek tax cuts for the wealthy at the expense of social programs.” (pg. 15) “The Republican strategy is to divide the public on issues so their riches can be protected.” (pg. 34) “The majority of Americans support stem cell research. Maybe George Bush would allow stem cell research if Halliburton could make money from it?” (pg. 80) “If the goal is spreading propaganda, then Fox News is working.” (pg. 95) 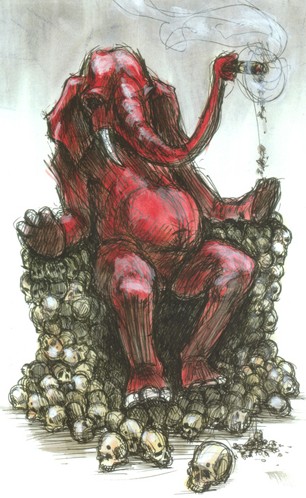 “Local indie/hardcore artist Derek Hess and politician/self-proclaimed “policynerd” Kent Smith might actually be greater together than the sum of their individual parts. The duo has long charted ground individually in town with fiery effect. Together, they’ve joined forces for an incendiary graphic essay folio full of scathing indictments that scald like napalm.” – CoolCleveland.com, July 16, 2008.

“If, as Alan Moore once observed, ‘the word is the unit of currency of the left brain, and the image that of the right,’ then Derek Hess and Kent Smith have achieved a balance between the two.” — Real Detroit Weekly, July 30, 2008, Page 58.

“Provocative? Definitely. Controversial? Most likely. Inflammatory? Only if you give it to your conservative relatives for Christmas (something we highly recommend).” — Metrotimes, July 30, 2008, Page 36.

“Smith’s written words are united with Hess’ artwork to create a book that does not leave any questions on what stance the duo holds in regards to the nation’s highest political leaders.” — Record – Courier, July 31, 2008, Page C-2.

“Please God Save Us is a smart, provocative and perhaps controversial look at some of today’s most pressing societal issues.” – The Cleveland Leader, September 30, 2008.

“If you have yet to catch a peek at this book, you’ll be blown away by internationally known artist, Derek Hess’ intense imagery combined with Cleveland-area politician, Kent Smith’s powerful words. Yes, the name Please God Save Us pretty much sums it up: this book tests the mind and ideals of the nation in a politically charged tour de force.” — Juxtapoz Magazine (online), September 30, 2008.

“When a former community organizer and Democratic Party official joins forces with a famed printmaker, illustrator and rock ‘n’ roll poster artist, you get “Please God Save Us”. It’s a book of intense illustrations by Derek Hess with text by Kent Smith, ripping into right-wing pieties and devastation wreaked by literal “red elephants” on people, the planet and free thought.” — Pittsburgh City Paper, October 15, 2008, Page 48.

“We are all irritated with U.S. leaders and the Christian right telling us how to vote on Proposition 8, but do we say anything more than ‘this sucks’? Fortunately, Kent Smith can, and does so in an educated and rational manner. More than just a complement, Derek Hess’s brilliantly messy and melancholic Ashley Wood meets Bill Sinkiewicz-style paintings, sketches and collages (often using the Red Elephant as his subject) appear on each page, echoing Smith’s words (and visa-versa). If the publishers of Ad Busters worked in cohesion and employed a shit-hot illustrator, the result would be this book.” – SLUG Magazine, November 2008.

“Please God Save Us,” a blend of Kent Smith’s facts and tracts with Derek Hess’s startling, dramatic art. Smith is an activist Democrat from suburban Cleveland, Hess a Cleveland artist who made his mark in the 1990s designing rock posters and album covers for the likes of Shudder to Think, Pantera, and Pink Floyd. Hess’s work is unapologetically subversive. A shot at the religious right, “Please God Save Us” balls word and image into a smart fist.” — Boston Globe, November 23, 2008.